Should we devote 2014 to wilderness? 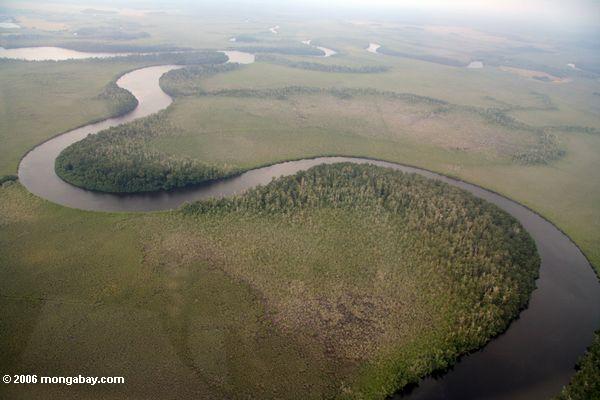 Meandering river in the lowlands of Gabon. Photo by: Rhett A. Butler.

American writer and philosopher, Henry David Thoreau once said, “In wilderness is the preservation of the world.” Anyone who has spent time in vast untouched wild space likely understands Thoreau’s comment. Yet wilderness everywhere—already vanishing—remains imperiled by a variety of threats. To draw attention to the importance of the keeping wilderness in the world, PAN Parks, an organization that works to protect wilderness in Europe, has proposed to make 2014 the International Year of Wilderness.

The group has gathered a number of signatories and approached the UN’s Convention on Biological Diversity (CBD) on the idea. They hope, as well, to raise the idea at the upcoming UN Rio+20 Summit on Sustainability. Mongabay.com recently spoke to PAN Parks Executive Director, Zoltan Kun, about the proposal, why wilderness is important, and what people could do to support the initiative. Mongabay: How do define wilderness?

Zoltan Kun: There are various technical definitions of wilderness and—as wilderness is a human concept of nature—there are even more interpretation of these definitions. We at PAN Parks Foundation use a definition, which was developed and agreed by the European Wilderness working Group in April 2012: Wilderness areas are large unmodified or slightly modified natural areas, governed by natural processes, without human intervention, infrastructure or permanent habitation, which should be protected and managed so as to preserve their natural condition and to offer people the opportunity to experience the spiritual quality of nature.

In practice this means that there is no extractive use allowed in wilderness areas, which means that activities such as hunting, fishing, mining, logging, grazing, grass cutting, road and building construction are not accepted inside the wilderness areas, and the only management interventions are those aimed at maintaining or restoring natural ecological processes and the ecological integrity. However, visitors have the opportunity to enjoy wilderness in a sustainable way.

The most characteristic feature of wilderness is a natural dynamic without interference. Removing broken trees after snowfall can create a feeling of ‘a tidy forest’ but the missing dead wood deprives forest ecosystems of nutrition, species and important ecological processes.

Mongabay: Why is wilderness important in our lives?

However we should not forget that wilderness also offers sustainable economic and environmental benefits such as addressing climate change through carbon sequestration and flood mitigation.

Mongabay: Are there benefits to wilderness that people may not think about, i.e. economic or social?

Zoltan Kun: There are of course such benefits as well. Some of the economic benefits are obvious and can be seen in practice. Tourism is such a benefit which is strongly linked to African and American wilderness areas. However the non-direct use values of wilderness has not been discovered yet.

There are social benefits of wilderness:

Our foundation made a literature review of The Economics of Wilderness which is available at PAN Parks.

Mongabay: What accomplishments would you hope to see by designating 2014 the International Year of Wilderness?

Zoltan Kun: In order to protect wilderness for future generations, a global strategy is needed. Due to the rise in commodity prices, wilderness areas are under increasing pressure and they are at risk of being lost forever. There are interesting contradictory processes in Europe. While a lot of researchers argue that land abandonment process opens up the opportunity for rewilding 200,000 km2 of land in Europe—especially marginal farmland and forestry areas—the pressure of modifying the last pieces of wilderness is increasing. We believe that while restoring wilderness attributes is really important, we must guarantee the long-term protection of existing wilderness area.

So we basically hope that the designation of 2014 as International Year of Wilderness will bring the issue to the attention of greater public and policy-makers. This ultimately will lead to the development of a global protection strategy for wilderness.

Mongabay: What can people do to help?

Zoltan Kun: In order to support the nomination of 2014 as international year of wilderness, people can sign up at One Million Tweets and through donating a tweet express their support to the idea. They can also sign up at PAN Parks either as individual or as an organization.

We believe that people should be able to lobby decision makers in their own country or mobilize civil society organizations for supporting the idea. We need to create a loud voice for wilderness especially before the RIO+20 conference. Ideally the International Year of wilderness should be designated by the UN, and this event will be a great forum to promote this idea.

Beyond the support of International year of Wilderness, people can also support our foundation’s work directly. The Get Involved page of our website provide more information about how people can support the protection of wilderness at least in Europe.