Commentary by Robin Oisín Llewellyn on 1 May 2012 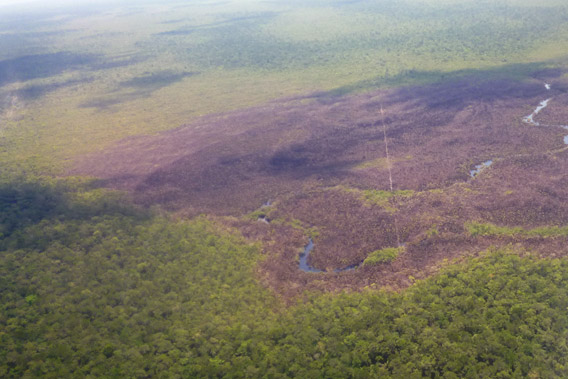 Aerial view of the burned bog in Sarstoon Temash National Park. Prior to burning, the bog would have appeared florescent green due to the sphanum moss. Photo by: SATIIM.

At the end of March in southern Belize the sun beats down through blackened trees onto what was the only known low-lying sphagnum moss bog in Central America. Now it is an expanse of ash and pale crusts of burned moss onto which dragonflies settle briefly before passing on. Fire spread through the area at the end of February 2012, and since then reeds have begun to sprout, but otherwise it remains a scene of devastation with no sign that the moss is regenerating.

The sphagnum bog is in a remote area of the Sarstoon Temash National Park close to the Guatemalan border, and due to operational constraints this is the first time that park rangers and their military escorts have seen the area since the blaze. Oil company workers conducting seismic operations in the national park reported—while the fire was still burning—that company activities ignited the area on February 25 close to a seismic line running through the bog. Rain and the oil company itself extinguished the fire two and a half days later.

During the patrol a smell of smoke still lingered in the surrounding rainforest but the flames had obviously concentrated on the moss itself – the boots of the rangers and soldiers pushed through the light grey shell of its remains to the solid floor beneath. The seismic line was one of many cut by US Capital Energy along which explosives were buried and detonated in a bid to find oil beneath the park, which is listed as a wetland of international significance under the Ramsar Convention. A flower believed to be a previously unknown species of carnivorous plant of the sundew (Drosera) family was discovered on the bog in 2010, and the area was believed to hold further scientific secrets.

Stepping cautiously through the crumbling terrain, the rangers explored the extent of the fire’s footprint by taking GPS readings where the blackened bog met the firmer ground and higher trees of the jungle. They were from the Sarstoon Temash Institute of Indigenous Management (SATIIM), the community organization that co-manages the park. SATIIM had opposed the granting of an exploration license to US Capital Energy, and when its objections were overruled had asked for extra funds to monitor the environmental impact of seismic testing—a request the government turned down. The government has not yet conducted an enquiry into the fire.

On April 20 the environmentalist volunteer pilots’ organization Lighthawk flew over the burned area with the park rangers and local media organization PGTV. The photographs taken on that flight show the seismic line cutting through the burned area, estimated at 420 acres.

Speaking before the blaze, CHx Chairman Alex Cranberg, who partners US Capital Energy, said he was convinced that his company’s “activities can and should lead to an economic and environmental ‘win-win'” situation for the area. A Texas energy entrepreneur, Cranberg’s Acoustic Geophysical Services provides seismic testing capability for oil exploration in the park. Cranberg is prone to attending discussions on peak oil dressed as a chicken, and told a Colorado business magazine that “sustainable energy is that which utilizes the fewest of our own resources so we can have additional resources to spend on education and on health and vacations.”

Park rangers say the detonations of explosives along the seismic trails, together with the traffic of workers within park boundaries, have disrupted the herding patterns of peccaries, driving them towards villages where they are easily shot for food. Rangers also report that jaguars are now encroaching into inhabited areas, where they have taken pigs and chickens inside the Q’eqchi’ Maya settlements of Crique Sarco and Conejo. As the seismic explorations reach their conclusion the seismic lines are left empty, creating a further headache for rangers: loggers and poachers have been utilizing these abandoned trails cleared through the jungle to steal valuable rosewood.

The fire and the issue of providing effective oversight and supervision of seismic testing has a wider significance for the Central American country as large parts of Belizean territory are covered by oil exploration contracts. On March 1 Belize voted by a 96 percent margin to oppose offshore drilling in a non-binding referendum, an event that Audrey Matura-Shepherd, Vice President of Oceana Belize, promised was just the beginning of the fight against offshore drilling. A widespread desire to protect the Mesoamerican Reef from oil spills that would erode the country’s fishing and tourism industries was a significant factor in the vote.

Currently the only operating oil wells in the country are run by Belize Natural Energy (BNE), which exports oil from a field near Spanish Lookout in western Belize. BNE is led by Alex Cranberg’s wife Susan Morrice, and most of its shareholders are reported to be Irish supporters of the mind-training coach Tony Quinn. The Irish Sunday Times reported in March that former BNE director Sheila McCaffrey is pursuing a court case against Morrice, Quinn, and BNE parent company INE, alleging that Quinn was given 64,000 shares on joining BNE’s board in 2006. Similar cases against the company have already been brought by former directors Jean Cornec and Paul Marriott. While BNE shareholders have not received dividends despite the company’s profits, the court heard that in August 2011 Morrice had agreed to buy back Quinn’s shares for $23 million. Morrice features prominently on Tony Quinn’s ‘Educo’ website that advertises mind training seminars in exotic locations around the world.

Opponents of oil exploration in the area of the Sarstoon Temash National Park argue that oil exploration should not take place in protected areas, and should only occur on indigenous lands (that include large areas of the park and neighboring areas) with the free, prior, and informed consent of the rainforest communities most affected. The government on the other hand argues Belize desperately needs to invest revenues from oil exports in social programs and national development, and is willing to ignore the Belize Supreme Court’s ruling against the government “issuing any concessions for resource extraction, including…permits or contracts authorizing logging, prospecting or exploration” on Maya lands.

While Prime Minister Dean Barrow appears committed to drilling in the national park if oil is discovered, the strength of the national response in the referendum illustrates significant public misgivings with the government’s pursuit of oil revenues, a sentiment likely to apply to the granting of concessions in protected areas as well as offshore. While the questions posed to the Belizean people by their significant national debt, vibrant tourist sector, and the possibility of a significant contribution to the national economy from oil royalties and taxes will not be easily settled, fires in a national park show that the question of how as well as if exploration should take place is highly relevant. Whether Belize is attracting the right type of oil company is open to debate, particularly in light of the BNE court case and Treaty Energy’s misleading claim in January to have found commercial oil on its Belizean Stann Creek concession, a move that Barrow himself suggested was due to the company’s wish to sell shares.

However these wider debates are settled, as a party to the Ramsar Convention Belize is committed to maintain the “ecological character” of wetlands listed under the treaty. What was apparent among the blackened trees and the ash of the Sarstoon Temash National Park was that this charred ecosystem had paid the price for the government’s granting of an exploration license in a remote area without also providing funds for effective supervision and monitoring. 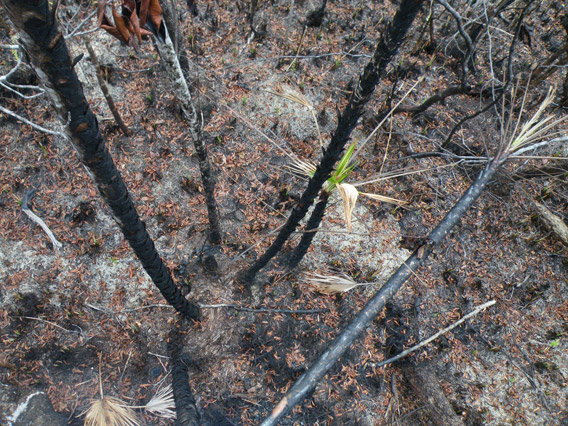 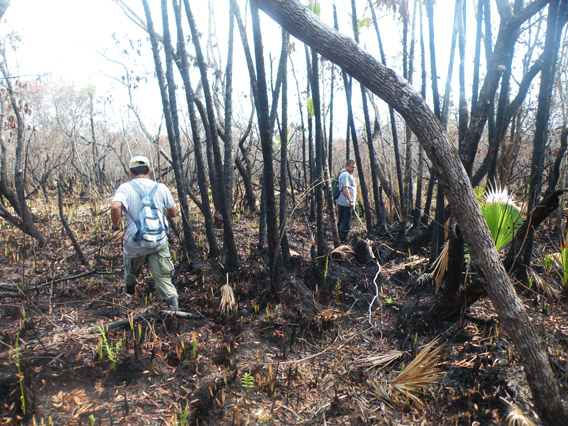 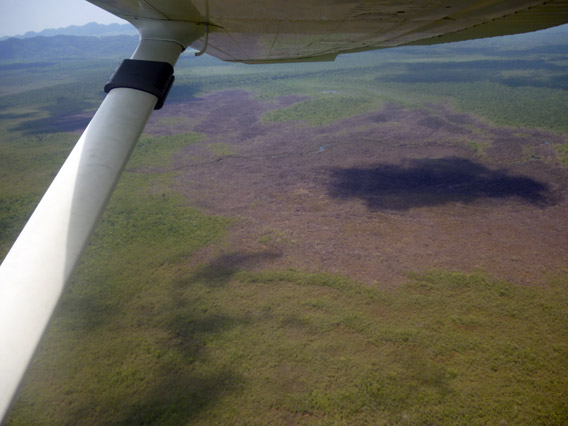 Robin Llewellyn is a freelance journalist writing about human rights and environmental issues.