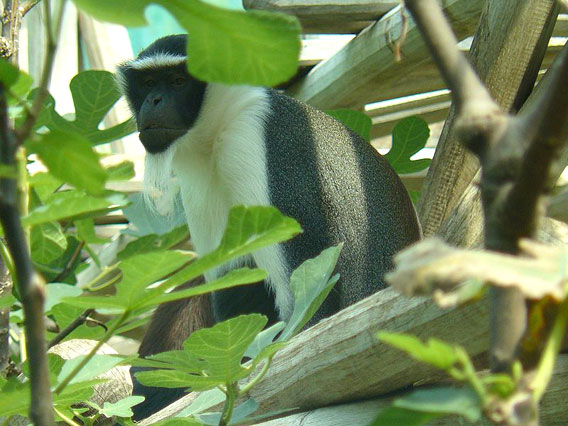 One of the world’s top 25 most endangered primates: the roloway monkey (Cercopithecus diana roloway) photographed in the Munich Zoo.

Saved from being converted into a vast palm oil plantation by PALM-CI in 2009, the Ehy Tanoé wetlands and forest in the Cote D’Ivoire (Ivory Coast) is home to three gravely endangered primates and as well as many other species. Since 2006, a pilot community management program has been working to protect the 12,000 hectare area, and a new study in mongabay.com’s open access journal Tropical Conservation Science finds that long-term conservation of the Ehy Tanoé wetlands and forest is, in fact, vital for locals who depend on the area for hunting, fishing, firewood, building materials, and medicinal plants. In addition, the study finds that the ecosystem has special cultural and spiritual importance to locals.

“Today, all over the world and especially in the global South, many people suffer from large-scale destruction of forest wealth depriving them of natural resources from which they have always drawn their livelihoods,” writes the study’s authors, who point out that the Cote D’Ivoire has one of the highest rates of deforestation worldwide. Plunging from 15 million hectares of forest cover in the early 20th Century to around 3 million hectares today.

“Decommissioning of some protected areas is even suggested by some authorities as a solution to the lack of arable land to meet the needs of an increasingly growing population. The effect of deforestation and poaching of wildlife in general, is dramatic. Wildlife is scarce in most national parks and reserves,” the authors write.

One of the Cote D’Ivoire’s last-standing primary forests, the Ehy Tanoé wetlands are possibly home to Miss Waldron’s red colobus monkey (Piliocolobus waldronae badius), the roloway monkey (Cercopithecus diana roloway), and the white-collared mangabey (Cercocebus atys lunulatus). Miss Waldron’s red colobus monkey has not been officially documented since 1978, however it is believed a last population may survive in the Ehy Tanoé wetlands; given its scarcity—and even possible extinction—its no surprise the subspecies is listed as Critically Endangered by the IUCN Red List. The roloway monkey is listed as Endangered, and one of the world’s top 25 most endangered primates. The white-collared mangabey is also considered Endangered.

Examining the community management pilot program in the area, which include input from NGOs, government, and researchers, the study found that the Ehy Tanoé wetlands’ value “is not limited to the specificity of its biodiversity. In fact, maintaining such a forest, preserves at the same time, the livelihoods of riparian communities and essential values for social and spiritual balance within these communities.”

Local people use the ecosystem for hunting, fishing, medicinal plants, firewood, construction materials, and tools. Though less frequent, they also use natural resources to make alcohol and clearing land for agriculture.

“The study found that agriculture and fishing are the main economic activities in the region. The yields of these activities require the presence of forest cover provides good rainfall,” the authors write, noting that 90 percent of the surveyed population fishes.

Given their dependence on the ecosystem, locals venerate the local rivers.

“Worship ceremonies of the ‘guardian spirits’ inhabiting these waters are held at least once a year,” the authors write. This veneration has resulted in a sacred rule which prohibits river access on Wednesdays, a day for the “spirits and other inhabitants” of the forest. Such a spiritual belief shows one way in which local communities have built-in rules to promote sustainable-use of ecosystems.

The community management program has proven successful in combating major threats as well, including keeping loggers out of the wetlands and halting the palm oil project.

(05/06/2009) Chimp populations continue to decline in Africa. A new survey of our closest relatives in the Cote D’Ivoire found that the population fell from an estimated 8,000 to 12,000 individuals to a paltry 800 to 1,200, a decline that took place in less than twenty years.

(01/22/2006) West Africa’s once verdant and extensive rainforests are now a historical footnote. Gone to build ships and furniture, feed hungry mouths, and supply minerals and gems to the West, the band of tropical forests that once extended from Guinea to Cameroon are virtually gone. The loss of West Africa’s rainforests have triggered a number of environmental problems that have contributed to social unrest and exacerbated poverty across the region.