Funds ostensibly set aside to reward tropical countries for protecting their rainforests are being held up, threatening to exhaust the political capital needed to advance the proposed reducing emissions from deforestation and degradation (REDD) mechanism before it even gets off the ground, warned the president of Guyana during a lively panel organized by Avoided Deforestation Partners on the sidelines of UN climate talks in Cancun, Mexico.

Sitting across from Norwegian Prime Minister Jens Stoltenberg, President Bharrat Jagdeo said his country had yet to see the any of the $30 million in funds allocated by Norway for the small South American country’s progress in reducing deforestation from a project baseline over the past year. Jagdeo placed blame squarely on the World Bank, which is administering the funds.

“Fast-track financing is a nightmare,” he told a packed audience. “It is a test of the sincerity of the developed world.”

Jagdeo said he agreed with Norway in the need for results-based finance, but added “What I have a problem with is when I deliver the results I can’t get the money.”

Jagdeo said the delay risks undermining the political capital needed to carry out his ambitious plan to shift Guyana toward a low carbon development model that spares its vast rainforest, which is larger than England. Jagdeo’s plan includes solar installations, land title, and small grants for indigenous families.

“Once the results are delivered, the money should be delivered so we can deliver political will.” 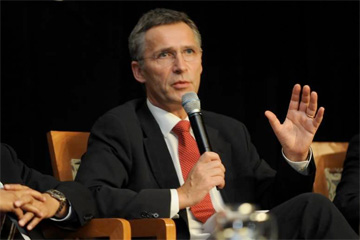 Prime Minister Stoltenberg, who earlier said he thinks the early stages of REDD are “really going quite well”, agreed that political will is indeed a concern. Norway has committed billions of dollars in performance-based rainforest conservation, including $1 billion to Brazil, $1 billion to Indonesia, $250 million to Guyana, and more than $100 million each to Tanzania and Congo Basin countries, but opposition parties have raised questions about the logic of paying tropical countries to conserve their forests at a time of economic uncertainty.

Noting that Norway has some of the world’s highest taxes, especially on oil consumption, Stoltenberg said: “It’s hard to win elections on a message of high taxation. We won election last year but you never know, elections are uncertain things.”

He added that the government faces a lot of pressure to ensure that Norway’s money is well spent.

“Results-based finance is the best way to mobilize political will.”

But both Stoltenberg and Jagdeo emphasized the importance of coming to an agreement on REDD.

Jagdeo closed by arguing for a good global agreement that includes deep cuts in emissions levels and room for the private sector. He added a price signal of $20 to $25 per ton of CO2 would be the best way to bring restore private sector interest in REDD, which has stagnated as policymakers have failed to reach an agreement on a REDD framework over the past year.

“We don’t want to have to rely on public sector financing in the long term.”