According to a new analysis by the World Resources Institute (WRI), the many ecosystem services provided by the Gulf of Mexico will be severely impacted by BP’s giant oil spill. ‘Ecosystem services’ are the name given by scientists and experts to free benefits provided by intact ecosystems, for example pollination or clean water. In the Gulf of Mexico, such environmental benefits maintain marine food production, storm buffers, tourism, and carbon sequestration, but one of the most important of marine ecosystem services is known as ‘primary production’.

The backbone of the marine food chain, primary production refers to the process whereby some marine organisms turn carbon dioxide into organic compounds—in this case corals, sea grass, algae, and the most important of all phytoplankton.

According to the WRI, the oil disaster that began when a BP oil rig exploded on April 20th couldn’t have come at a worst time or in a worst place for primary production: the Gulf’s highest production peaks near the Mississippi Delta in June and July.

According to the WRI, if primary production drops 20 percent it could result in a loss of $350 million over twenty years of commercial fishing values. The monetary value hits $875 million if primary production rises to 50 percent. The analysis doesn’t include loss of jobs, income, and taxes for the region.

Although considered ‘free’ by most economists, ecosystem services are worth far more than most people realize. According to Earth Economics one acre of Mississippi Delta produces approximately $13,000 in ecosystem services annually. But oil pollution will greatly diminish such long depended on and cryptic returns.

Losing twenty percent of the Gulf’s ecosystem services from the border of Texas and Louisiana to St. George Island, Florida will result long-term losses of some $15-60 billion over the next two decades, according to the WRI.

How do we know the oil will still be affecting the region after twenty years? The Exxon Valdez Spill Trustee Council says that ecosystem services have not yet recovered after 20 years from that spill, and the Exxon Valdez disaster was far smaller.

The WRI argues that from now on ecosystem services must be taken into account when officials grant offshore drilling licenses. They are currently ignored by public officials handling oil drilling.

According to a press release: “risk assessment needs to be comprehensive in nature, capturing potential impacts to coastal, nearshore, and offshore marine ecosystems from both a market and non-market perspective. This requires quantification of ecosystem service values and potential damages.”

The United States has the highest consumption of oil in the world. In 2007 the United States consumed 20,680,000 barrels (868,500,000 gallons) of oil every day, or approximately 7.5 billion barrels (or 337.5 billon gallons) of oil during the year. Despite this long grandstanding on the issue of ‘oil dependence’ and now the oil spill, there have been few policy directives aimed at decreasing US consumption of oil. 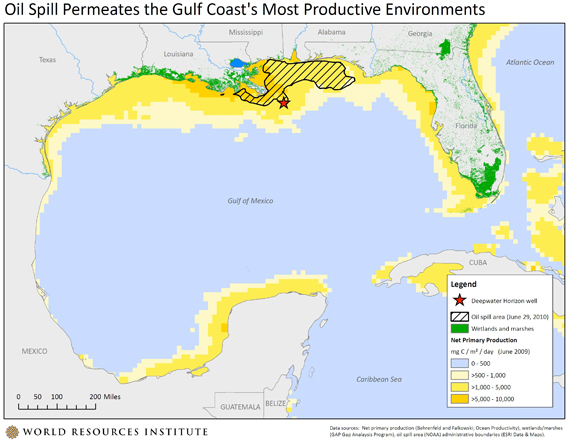 Most productive areas of the gulf with spill highlighted. Map by WRI. Click to enlarge.

Will we ever know the full wildlife toll of the BP oil spill?

(06/08/2010) Will we ever know the full wildlife toll of the BP oil spill? The short answer: no. The gruesome photos that are making the media rounds over the last week of oiled birds, fish, and crustaceans are according to experts only a small symbol of the ecological catastrophe that is likely occurring both in shallow and deep waters. Due to the photos, birds, especially the brown pelican, have become the symbol of the spill to date. But while dozens of birds have been brought to rescue stations covered in oil, the vast majority will die out at sea far from human eyes and snapping cameras, according to Sharon Taylor a vet with the US Fish and Wildlife Service.

(05/31/2010) The US government has now confirmed that the oil spill in the Gulf of Mexico is the United States’ largest oil spill and perhaps the nation’s worst environmental disaster. While poor government oversight and negligence by oil giant BP certainly contributed to the disaster, the fact that the US is drilling over a mile below the surface in one of its most important marine ecosystems is directly related to US consumption of oil: the highest in the world.