BP and the Perilous Voyage of Bama the Manatee

Commentary by Nikolas Kozloff on 23 May 2010

To the degree that Americans are paying attention to the environmental plight of marine wildlife in the Gulf of Mexico, they may focus most upon dolphins and whales. However, the U.S. public is much less familiar with another marine mammal, the manatee, which could also be placed in jeopardy as a result of the BP oil spill. One of the most outlandish creatures on the planet, the shy and retiring manatee, which gets its name from an American Indian word meaning “Lady of the Water”, is one of my favorite animals.

First described as a cross between a seal and hippo, the manatee has a wonderfully round body, mostly black skin the texture of vinyl, a bright pink belly, a diamond-shaped tail and a cleft lip. Manatees belong to the biological order Sirenia which includes dugongs and Steller’s Sea Cow, the latter hunted to extinction in the Bering Sea during the 1700s.

“Sluggish, squinty-eyed and bewhiskered,” notes the New York Times, the manatee “is more likely to have its rotund bulk compared to a sweet potato.” Living life in the slow lane, manatees are fond of doing nothing much at all. When they’re not eating, they take frequent naps. An exclusive vegetarian that feeds on water lettuce and hyacinth, the animal eats 10 percent of its body weight in a single day. Not surprisingly manatees are robust — they can grow up to ten feet long and weigh nearly a ton.

In the wake of BP’s disaster, the manatee could be in for a rough patch. Indeed, oil could ultimately result in death or significant injury in the event that manatees are exposed to petroleum. The docile sea creature, which can be found along the coasts of Louisiana, Mississippi, Alabama, and Florida, could ingest oil-damaged sea grass beds and other vegetation. If the marine mammals come into contact with surface oil, this could irritate their eyes and mucous membranes while clogging the animals’ nostrils.

It’s not the first time that oil has posed a major risk for the manatee. Take, for example, the case of Venezuela. There, the manatee was surely exposed to petroleum pollution in Lake Maracaibo, located in the westernmost state of Zulia. While I was in Maracaibo, I heard to my surprise that some manatees still inhabited pockets of the lake in spite of longstanding petroleum exploration carried out first by the British and Americans and later by the Venezuelan state. At a local zoo, I was told, one could even go to visit a female manatee named Zulia. Apparently however she was not being held under optimum conditions.

I never got to the Maracaibo zoo, but while researching my recently released book, No Rain in the Amazon: How South America’s Climate Change Affects the Entire Planet (Palgrave-Macmillan), I vowed to see a manatee at long last. In Peru I finally got my chance. At an installation belonging to the Institute of Peruvian Amazon Research outside of the town of Iquitos, I saw a couple of caretakers throwing lettuce into open-air tanks. In the first tank, a pint-sized baby dolphin was scratching its back against a wood pole.

Walking further, I spotted another tank full of juvenile manatees and, in a third, a baby manatee all on its own. By the look of it, the infant was not doing too well. One of the staff explained that the caretakers found the animal in a severely malnourished state. While seeing the manatees was certainly one of the highlights of my trip, it was disappointing to observe the infant in such a poor state of health.

Sadly, as in Venezuela and the Gulf of Mexico, Amazonian manatees have been put at risk as a result of oil exploration. As if that was not enough, the animals have also been subjected to drought which scientists have linked to warming waters in the Atlantic. In 2005 observers were saddened by the sight of dying manatees lying in local rivers. According to the Brazilian environmental agency, more than one hundred of the rare aquatic mammals may have died as a result of the drought. It’s impossible to say how many manatees are left, perhaps fewer than 10,000 in the Amazon region.

In the U.S. meanwhile, the manatee is already endangered and the BP spill poses yet a further problem for the animal. Because manatees need to surface to breathe air, they could become exposed to oil on the water. If they ingest oil, manatees could develop lesions and erosions of the esophagus, liver toxicity and kidney problems. Ingestion could kill the organisms in manatees’ stomachs which aid in the digestion of sea grasses consumed by the animals.

Of particular concern is the plight of Bama, the first Alabama manatee to be tagged by scientists. From mid-May to mid-November, Bama and at least a dozen other manatees call Alabama home. Currently, Bama is migrating back home to Alabama from Florida. Though manatees don’t tend to travel in pods or herds, it’s likely that Bama represents the advance guard of manatees making their way back towards the northern Gulf.

For a long time, the scientific community regarded manatees as stupid. In 1902, haughty British anatomist Grafton Elliot Smith declared that manatee brains, which were tiny in proportion to the animals’ bodies, resembled “the brains of idiots.” In addition, manatees have poor eyesight with about 20/420 vision, similar to cows and far inferior to humans.

Yet, it’s easy to underestimate the manatee. Indeed, according to Florida researchers the animals display unusual sensory capabilities and brain organization. “Far from being slow learners,” notes the New York Times, “manatees, it turns out, are as adept at experimental tasks as dolphins, though they are slower-moving and, having no taste for fish, more difficult to motivate. They have a highly developed sense of touch, mediated by thick hairs called vibrissae.”

In murky waters, the manatees’ acute sense of touch and vibrissae, located on the face but also all over the body, come in handy. These bristly vibrissae serve to transmit information to the brain via nerve fibers. Though other animals such as dogs have vibrissae, they don’t have them in such large numbers and typically only on the face. “For now,” notes the Times, “the question of how intertwined the sensory abilities of manatees might be remains unanswered. Yet even what is known reveals a degree of complexity that argues against labeling them as sweet but dumb—peaceable simpletons.”

Long derided as stupid by humans, the manatee will now have to steer clear of man’s environmental folly in the Gulf. Though Bama and other manatees have poor vision, perhaps their other extra sensory abilities will alert them to danger. It may be the only tool they have at their disposal as the animals seek to survive the despoliation of their habitat.

Nikolas Kozloff is the author of No Rain in the Amazon: How South America’s Climate Change Affects the Entire Planet (Palgrave, 2010). Visit his website, nikolaskozloff.com 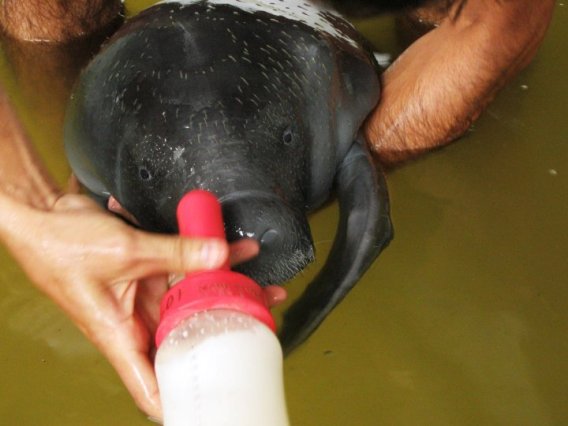 (05/13/2010) The oil spill in the Gulf of Mexico is taking its toll on the region’s wildlife: brown pelicans, sea turtles, several species of fish, and now dolphins have been found dead. The National Marine Fisheries Service reported today finding six dead dolphins in Louisiana, Mississippi, and Alabama since May 2nd. Officials are saying the deaths could be related to the oil spill or may be due to natural deaths from calving. They are currently testing tissue samples to determine if oil pollution was a cause of death. Dolphins have been observed swimming in oil-stained waters off of Louisiana.

Neither slow nor stupid, manatees are killed by boats because they can’t hear them

(12/12/2008) Last year 73 manatees were killed by boats in Florida, despite two decades of manatee-related protections. In fact, manatee deaths due to boat collisions have only increased since protections were implanted. A recent study at the Florida Atlantic University has finally revealed why boats are so dangerous to manatees: the manatee cannot run from what it does not hear.