A study issued by Indonesian government recommends a moratorium on peatlands conversion in order to meet its greenhouse gas emissions target pledged for 2020, reports the Jakarta Post.

The report, commissioned by the National Development Planning Agency (Bappenas), says that conversion of peatlands accounts for 50 percent of Indonesia’s greenhouse gas emissions but only one percent of GDP. A ban on conversion would therefore be a cost-effective way for the country to achieve its goal of reducing carbon emissions 26 percent from a projected baseline by 2020.

But the recommendation is likely to face strong resistance from plantation developers eager to expand operations in peatland areas. Last year the Agricultural Ministry lifted a moratorium on the conversion of peatlands of less than 3 meters in depth for oil palm plantations. Environmentalists said the move would release billions of tons of carbon dioxide.

To pacify developers, the Bappenas report proposes a land-swapping mechanism that would allow existing peatlands concessions to be relocated to other areas, although not forests or degraded forests. The Indonesian government claims there are millions of hectares of abandoned and degraded grasslands that could be suitable for cultivation. While the cost of development on such lands would be higher, some believe funds generated by the U.N.-backed reducing emissions from deforestation and degradation (REDD) program could go towards subsidizing start up costs. A handful of palm oil companies have already agreed to forgo plantation development in peatland areas in exchange for payments from the sale of forest-based carbon credits.

The report says that emissions from peatlands conversion currently contributes about a billion tons of CO2 emissions per year, but could be reduced by about 338 million tons by 2025 simply by enforcing existing laws governing plantation development on peat soils. Preventing fires and rehabilitating peatlands by blocking drainage canals could cut emissions by a further 430 million tons annually, according to Basah Hernowo, the director of forestry and water resources conservation at Bappenas.

Basah noted that most emissions from peatlands degradation currently come from Sumatra and Kalimantan, which have 7.2 and 5.8 million hectares respectively. Papua has more than 8 million of hectares of peatlands, most of which has been spared from development to date.

Peatlands, formed by organic deposits comprised of partially decayed plant matter that accumulates over hundreds of years, cover more than 400 million hectares of land worldwide. Most of these exist in permafrost in the far north, though some are found in the lowlands of tropical Asia, especially in the swampy forests of Indonesia and Malaysia. Peatlands are giant reservoirs of carbon, with those in Southeast Asia locking up 42,000 million tons of carbon, according to Wetlands International, an NGO that campaigns on behalf of wetlands conservation. However, when peatlands are drained, cut, or burned this stored carbon is released into the atmosphere, contributing to climate climate. 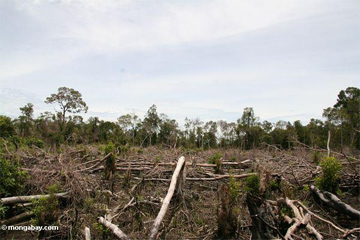 Each year hundreds of thousands of hectares of peatlands are drained and cleared for oil-palm and timber plantations. Generally, developers dig a canal to drain the land, extract valuable timber, then clear the vegetation using fire. In dry years these fires can burn for months, contributing to the “haze” that regularly plagues Southeast Asia. Fires in peatlands are especially persistent, since they can smolder underground for years even after surface fires are extinguished by monsoon rains.

Burning is the source of about 70 percent of emissions from peatlands, but merely draining peatlands also contributes to global warming—upon exposure to air, peat rapidly oxidizes, decomposes, and releases carbon dioxide. Degradation and destruction of forests growing on top of peatlands is a further source of emissions.

Beyond contributing to climate change, destruction of peatlands in Indonesia puts local populations at greater risk of flooding. Peatlands are a natural means of flood control, acting like a sponge to absorb large amounts of rainfall and runoff, while reducing the threat of erosion.

(11/04/2009) A new study by Wetlands International and Greifswald University provides country-by-country data on peat stocks and emissions. Overall the assessment found that drainage of wetlands for agriculture, forestry and peat extraction causes 1.3 billion tons of carbon dioxide emissions per year. Emissions from fires and peat mining (for horticulture and fuel) amount to another 700,000 million tons per year.

(11/04/2009) The EU is the world’s second largest source of carbon dioxide emissions from peatlands drainage, after Indonesia, reports the first country-by-country assessment of peat stocks. The study, conducted by Wetlands International and Greifswald University, found that drainage of wetlands for agriculture, forestry and peat extraction causes 1.3 billion tons of carbon dioxide emissions per year. Emissions from fires and peat mining (for horticulture and fuel) amount to another 700,000 million tons per year.

(06/04/2009) Indonesia’s decision earlier this year to allow conversion of up to 2 million hectares of peatlands for oil palm plantations is “a monumental mistake” for the country’s long-term economic prosperity and sustainability, argues an editorial published in the June issue of Frontiers in Ecology and the Environment.

Can carbon credits from REDD compete with palm oil?

(03/30/2009) Reducing emissions from deforestation and degradation (REDD) is increasingly seen as a compelling way to conserve tropical forests while simultaneously helping mitigate climate change, preserving biodiversity, and providing sustainable livelihoods for rural people. But to become a reality REDD still faces a number of challenges, not least of which is economic competition from other forms of land use. In Indonesia and Malaysia, the biggest competitor is likely oil palm, which is presently one of the most profitable forms of land use. Oil palm is also spreading to other tropical forest areas including the Brazilian Amazon.

Indonesia confirms that peatlands will be converted for plantations

(02/19/2009) Indonesia’s Minister for the Environment has approved a decree that will allow the conversion of carbon-rich peatlands for oil palm plantations, reports The Jakarta Post.