In a report released Wednesday the International Energy Agency warned that a business-as-usual approach to energy use would result in a 6°-degree rise in temperatures putting hundreds of millions at risk from reduced water supplies and diminished agricultural production. But the energy think tank said that limiting temperature rise to 2-3°-rise by the end of the century would be “possible, but very hard.”

“Current trends in energy supply and consumption are patently unsustainable – environmentally, economically and socially – they can and must be altered,” said Nobuo Tanaka, Executive Director of the International Energy Agency (IEA). “Rising imports of oil and gas into OECD regions and developing Asia, together with the growing concentration of production in a small number of countries, would increase our susceptibility to supply disruptions and sharp price hikes. At the same time, greenhouse-gas emissions would be driven up inexorably, putting the world on track for an eventual global temperature increase of up to 6°C.”

IEA says that a shift towards renewable energy sources will be key in the transition to a low carbon economy. It notes that renewable energy is growing quickly and is expected to become the world’s second largest source of electricity — after coal — “soon after 2010.” It expects energy-supply investment of $26.3 trillion between now and 2030, including substantial investments in oil, which “will remain the world’s main source of energy for many years to come, even under the most optimistic of assumptions about the development of alternative technology.” IEA expects the costs of oil and gas production to continue to rise as supplies become more scarce and governments assert greater controls over reserves.

“One thing is certain,” said Tanaka, “while market imbalances will feed volatility, the era of cheap oil is over.”

The report estimates the cost of increasing the share of low-carbon energy from 19 percent in 2006 to 26 percent in 2030 would cost an additional $4.1 trillion than a “business-as-usual” approach to energy investment.

“Most of the increase is on the demand side, with $17 per person per year spent worldwide on more efficient cars, appliances and buildings,” states IEA. “On the other hand, improved energy efficiency would deliver fuel-cost savings of over $7 trillion.”

The report also looked at the effort required to limit emissions to keep atmospheric carbon dioxide levels under 450 ppm — a level seen as a critical tipping point by many scientists — and 550 ppm, a level that would imply a 3°rise in global temperatures. It found that industralized countries alone will not be able to make 450 ppm a reality. A 450 ppm target will require developing countries — like India and China — to agree to limit their emissions under an international framework with carbon prices of around $180 per ton, compared with current prices of $23 in Europe’s emissions trading scheme.

“We would need concerted action from all major emitters. Our analysis shows that OECD countries alone cannot put the world onto a 450-ppm trajectory, even if they were to reduce their emissions to zero,” said Tanaka. 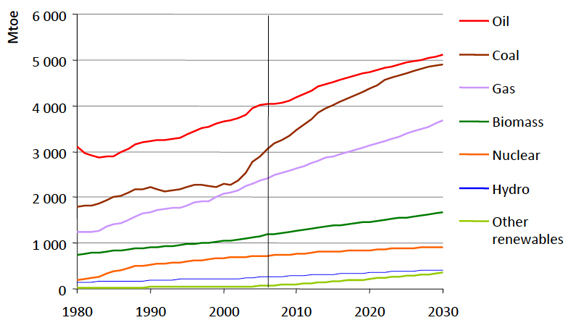 World energy demand expands by 45% between now and 2030 – an average rate of increase of 1.6% per year – with coal accounting for more than a third of the overall rise 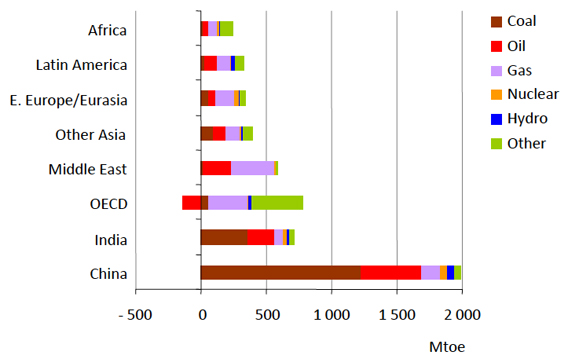 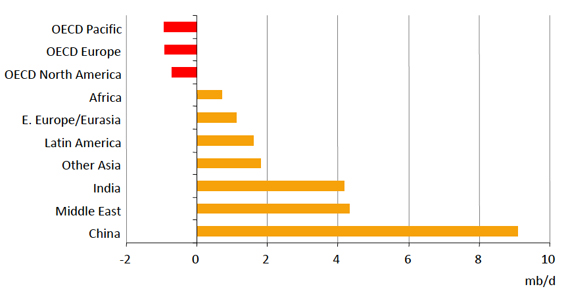 All of the growth in global oil demand comes from non-OECD, with China contributing 43%, the Middle East 20% and other emerging Asian economies most of the rest 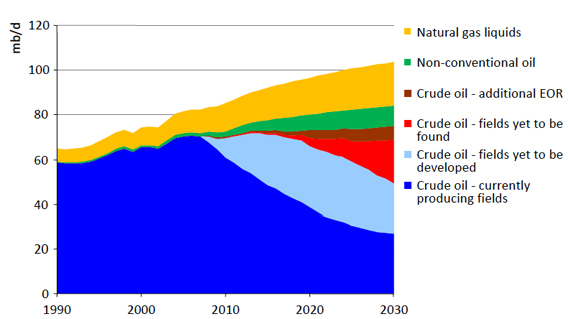 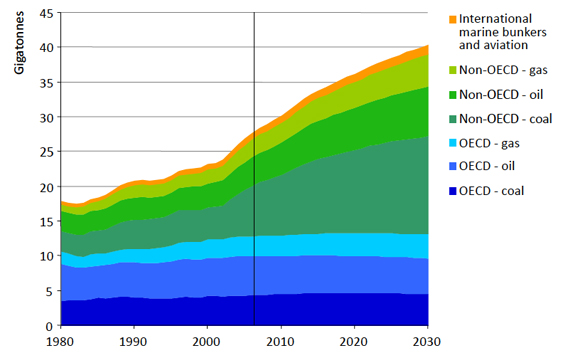 97% of the projected increase in emissions between now & 2030 comes from non-OECD countries – three-quarters from China, India & the Middle East alone

While technological progress is required to achieve some emissions reductions, increased deployment of existing low-carbon technologies accounts for most of the CO2 savings