Amazon deforestation in Brazil falls 29% for 2007

Amazon deforestation in Brazil falls 31% for 2007

Amazon deforestation in Brazil falls 31% for 2007

Deforestation in the Brazilian Amazon fell 31 percent for the 2006-2007 year, compared with the prior period, according to preliminary estimates from Brazil’s National Institute for Space Research (INPE). The loss of 3,707 square miles (9,600 square kilometers) of rainforest was the lowest since the Brazilian government started tracking deforestation on a yearly basis in 1988.

Brazil credits the drop in deforestation rates to stepped up law enforcement efforts, which have netted hundreds of illegal loggers and corrupt officials, while generating some $1.7 billion in fines, according to the Brazilian Institute of the Environment and Renewable Natural Resources. The government has also dramatically expanded the extent and number of protected areas, setting aside more than 100 million hectares of the Amazon basin from development since 2002. 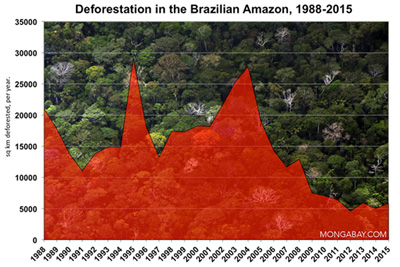 Deforestation in the Brazilian Amazon fell by more than 60 percent between 2004 and 2007. 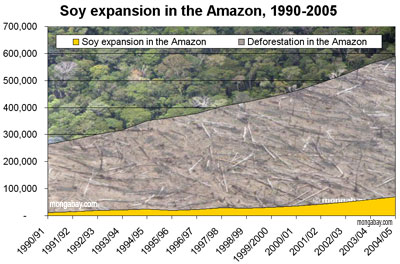 Note: some soybean farms are established on already degraded rainforest lands and neighboring cerrado ecosystems. Therefore it would be inappropriate to assume the area of soybean planting represents its actual role in deforestation.

Scientists say that while these measures have helped, lower commodity prices are more likely the primary reason behind slowing forest conversion. Agricultural production — namely cattle and soybeans — and land speculation tied to moves in Brazil’s currency are leading drivers of deforestation in Brazil.

“Despite the good news, however, most observers agree that low prices for beef and soy exports, and the strong Brazilian currency, have also played a major role in reducing Amazon deforestation,” William F. Laurance, a scientist at the Smithsonian Tropical Research Institute and a widely recognized expert on deforestation in the Amazon, told mongabay.com. “The big concern is that rates of forest loss may well rise again once the Brazilian currency falls, or commodity prices increase, either of which would make beef and soy exports more competitive and thereby increase pressures on surviving forests.”

Nevertheless, Laurance welcomes the reprieve, even if temporary, in the deforestation rate.

“It’s very gratifying to see deforestation rates declining in the Brazilian Amazon since 2005, especially given that forest loss from 2002 to 2004 was the worst in the history of the Amazon. I think this demonstrates what can be achieved when the Brazilian government makes a concerted effort to crack down on illegal logging and deforestation,”

U.S. ethanol may drive Amazon deforestation
(5/17/2007) Ethanol production in the United States may be contributing to deforestation in the Brazilian rainforest said a leading expert on the Amazon. Dr. Daniel Nepstad of the Woods Hole Research Center said the growing demand for corn ethanol means that more corn and less soy is being planted in the United States. Brazil, the world’s largest producer of soybeans, is more than making up for shortfall, by clearing new land for soy cultivation. While only a fraction of this cultivation currently occurs in the Amazon rainforest, production in neighboring areas like the cerrado grassland helps drive deforestation by displacing small farmers and cattle producers, who then clear rainforest land for subsistence agriculture and pasture.