Report lists Indigenous territories under greatest pressure in the Amazon

by Antenor Savoldi Junior on 5 September 2022

Men on horseback enter a protected Indigenous area, bringing along 100 head of cattle. Next to a village with no road access, inhabited by the Parakanã people, the men find what they were looking for: a deforested area. They abandon the cattle there and leave the protected zone without interacting with the Indigenous people.

Events like this one, reported by the Federal Police last May near Kae’eté village, in the Apyterewa Indigenous Territory, are examples of how protected areas for the exclusive use of Indigenous people are compromised by actions that, while not always uneventful, are planned to block demarcation and question the legal limits of Indigenous lands.

A report by the Brazilian conservation nonprofit Imazon shows that the Apyterewa Indigenous Territory, the land of the Parakanã people, continues to be the main target of deforestation imposed by land grabbers among all the Indigenous lands in the Amazon.

The research, which also monitors other protected areas of the Amazon, puts the Apyterewa territory as number four among areas that suffer the most deforestation pressures, with the Environmental Protected Areas (APA) of Triunfo do Xingu and Tapajós, both in the northern state of Pará, and the Chico Mendes Extractive Reserve, in Acre state, leading the overall destruction ranking.

APAs account for 46 percent of the entire size of what is known as Legal Amazon, a legally defined region that covers the nine Brazilian states that fall within the Amazon Basin and holds critical importance for biodiversity safeguarding and climate balance, not only in the region but across the planet.

The methodology used by Imazon divides the satellite-monitored areas into 10 square kilometer (3.86 square mile) “cells” and tags deforestation spots as a “threat” — whenever they are identified within 10 kilometers of conservation areas — or as a “pressure” — whenever the deforested cells are spotted inside the legally protected areas.

Satellite images from Apyterewa showed 48 deforestation cells from April to June this year, almost twice the 26 cells registered in the same period last year. The figure was also nearly five times higher than the 11 documented in each of the Indigenous territories that rank second, Cachoeira Seca do Iriri and Kayapó, both in Pará; and in the territory of Karipuna, in the state of Rondônia.

One of the primary reasons for the critical situation in these Indigenous areas is that they are located in the municipalities of São Félix do Xingu and Altamira, both in the state of Pará. “This is where deforestation is more intense and disordered,” Bianca Santos, a researcher at Imazon, told Mongabay by phone. “Also, the easy access to the area via Xingu River has served as a gateway for illegal mining within the territory.”

The most threatened Indigenous area is the Uru-Eu-Wau-Wau territory, in the state of Rondônia, which registered 24 deforestation cells in its surroundings, followed by the Trincheira/Bacajá reserve, in Pará, with 22. The two areas were also in top positions for the same period last year, according to Imazon. According to Santos, the data show that threatened lands are bound to become pressured in future reports.

Among all the protected areas monitored, the most pressured is the Triunfo do Xingu APA, with 108 deforestation cells registered within it, down from 128 in the same period in 2021. The Tapajós APA, also in Pará, ranks second overall, with 82 deforestation cells.

Created in 2006, Triunfo do Xingu APA was designed to protect adjacent Indigenous territories – among them, the Apyterewa territory. However, the growing devastation caused by the invasion of land grabbers, crops and cattle places both regions at the top of the Imazon rankings. The data confirm that the destruction spreads within the borders of these protected areas, in a region known as the “deforestation belt” located in the south and east of the Brazilian Amazon.

Ideflor-Bio, the Pará environmental agency responsible for Triunfo do Xingu APA, stated that more than 200 family properties are registered in programs that use agroforestry systems for “productive forest restoration” and the “recovery of altered areas.” 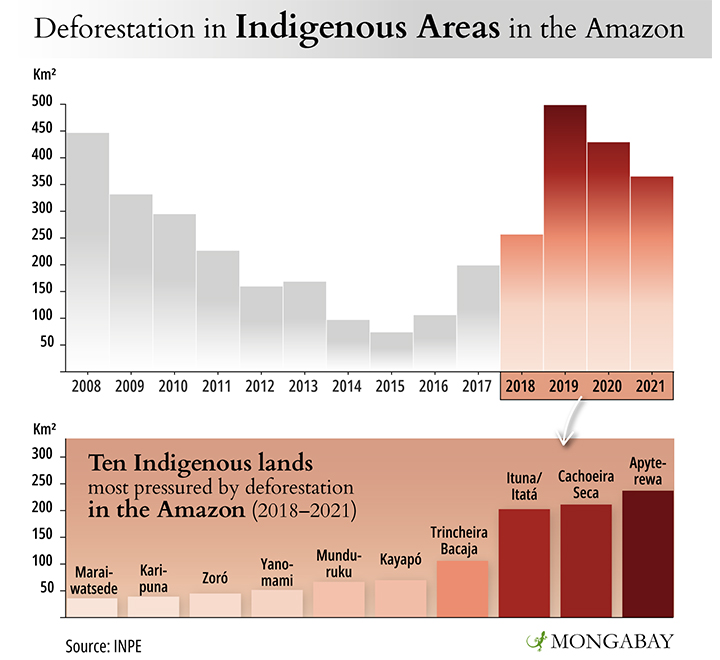 On August 17, Imazon released another report, which showed the cumulative deforestation numbers from August 2021 to July 2022, confirming the upward trend toward the destruction of areas in the Legal Amazon. The deforested area in 12 months expanded 3 percent from the previous year — the largest annual deforestation area for the past 15 years. The border region between the states of Amazonas, Acre and Rondônia, known as Amacro, accounted for 36 percent of this total, indicating an aggressive agricultural frontier expansion. Amacro advocates want to label the region as a “sustainable development zone,” under the governmental proposal of supposedly “conciliating sustainability and development” and “avoiding actions that may harm the environment” in the Amazon.

“The feeling of nonliability is an important fuel to deforestation in those areas,” Santos said. “Because the lack of punitive enforcement makes them think they will not suffer any consequences for invading and occupying Indigenous territory.”

“It is one of the most urgent situations in the country,” Antônio Eduardo Cerqueira de Oliveira, executive secretary of the Indigenous Missionary Council (CIMI), told Mongabay by phone. “The current government encourages invasions, mining and real estate speculation, removing and weakening the supervision functions of bodies such as the Federal Police, Funai (the Indigenous affairs agency), and environmental agencies such as IBAMA and ICMBio.” Oliveira points out that the federal government presented two bills, PL 191/2020 and PL 490/2007, designed to encourage the exploitation of protected areas.

PL 490/2007 proposes the marco temporal (“time frame”) thesis, claiming that Indigenous territories must be limited to areas where Indigenous people were present at the time of the approval of the 1988 Constitution. PL 191/2020 goes further, allowing mining, extraction, infrastructure and agribusiness-related activities in Indigenous lands across the country.

On August 19, CIMI released Violence Against the Indigenous Peoples of Brazil, its annual report, showing 305 cases of “possessory invasions, illegal exploitation of resources and damage to property” in at least 226 Indigenous lands across the country in 2021 alone. The figure, up 16 percent from the previous year, is almost three times higher than the 109 cases recorded in 2018. The report also indicates that 176 Indigenous people were killed last year, six fewer than the record for 2020. Also, there were 148 suicides reported among Indigenous people, the highest ever since the series started in 2014.

A cycle of aggression

Since its confirmation by the government in 2007, the Apyterewa Indigenous Territory has been the target of squatters and legal disputes. The municipality of São Félix do Xingu joined efforts in the Supreme Court to reduce the exclusive area for Indigenous people, arguing there are more than 3,000 families in protected areas that the natives do not traditionally use.

In 2016, a legal agreement conditioned the construction of the Belo Monte hydroelectric power plant to the removal and relocation of the families of farmers who illegally occupied the reserve. The process was interrupted during the presidency of Michel Temer (2016-2018), and the number of settlers began to grow, ensuing “conciliation” attempts in the STF, Brazil’s Supreme Court of Justice.

Last March, STF rejected the municipality’s request for the repeal of the decree signed by President Luiz Inácio Lula da Silva in April 2007 that recognized the Apyterewa Indigenous land as exclusive territory for the Parakanã people.

Mongabay asked the Ministry of the Environment to comment on Imazon’s study. Using data from DETER, the real-time deforestation detection system of the National Institute for Space Research (INPE), the ministry argued that the figures for July were the lowest since 2018, while the sum for the last 12 months pointed to a 2.16 percent reduction in deforestation of ​​the Legal Amazon. It also claimed that the budget for enforcement and inspection in Indigenous lands had increased by more than 150 percent in the last three years, and used data from INPE to indicate that deforestation in Indigenous lands fell by 26.8 percent between 2019 and 2021.

But the same INPE database showed that 2019 was the year with the highest deforestation record in Indigenous areas, with the figures in 2021 still 42.7 percent higher than the deforestation recorded in 2018, and fivefold the 2015 numbers – the lowest figure since the series started in 2008.

INPE’s own figures confirms the urgency of Apyterewa’s situation, which indicate the territory as the main target among the Indigenous lands from 2018 to 2021. Since 2008, Apyterewa has already lost more than 4.5 percent of its land to deforestation, second only to the 5.3 percent loss in the Cachoeira Seca territory.

“The first step toward protecting these territories is demarcation,” Imazon’s Santos said. “But the second, as important as the first, is vigilance, and enforcement to ensure that the areas are occupied only by Indigenous people, who act as protectors, preventing further deforestation.”

In addition to short-term measures, NGOs like The Nature Conservancy (TNC) Brazil highlight the importance of adopting public policies that strengthen the organization and autonomy of Indigenous peoples. “Indigenous environmental agents, for example, play an important role in protecting areas that are difficult to access,” Helcio de Souza, coordinator of Indigenous strategies at TNC Brazil, told Mongabay via email.

“In the medium and long term, reducing the pressure for deforestation involves the appreciation of the standing forest and its socio-bioeconomy.” Souza also said it is essential to implement financial mechanisms such as payment for environmental services and carbon sequestration. In the Apyterewa Indigenous Land, TNC helped to create community-based bioeconomy projects, such as nut extractions, and the use of seeds in women-led handicrafts.

“The presence of Indigenous people in regulated territories helps preservation, as their culture needs a healthy environment for their survival needs, their small crops, without accumulation,” CIMI’s Oliveira said. “These are lands of the Union, so they belong to the Brazilian people. But capitalism understands that the land needs to be exploited, and if it doesn’t, then it’s not useful. That’s why invasions have increased recently, and the invaders have been structuring themselves within the protected territories.” That is caused mainly by loggers, who deforest to transform the forest into pastures, which will later feed real estate speculation.

Mongabay explained the strengthening of these communities within the Apyterewa territory in a 2020 article. The cycle starts with deforestation, followed by land use for cattle pastures and soybean crops, then reinforced with the arrival of new contingents of squatters and real estate speculators in the devastated areas.

For CIMI’s Oliveira, the international community and multilateral organizations such as the United Nations and the Organization of American States need to put pressure on Brazil. Its impact is restricted, however, due to the alienation of the Brazilian government, since “both internal and external relations have deteriorated, so the interests of the most powerful groups prevail.”

Mongabay also contacted the Secretary of the Environment of the State of Pará, and Funai, but received no answer to requests for comments by the time of publication.

Banner image: An Apiaká Indigenous leader in front of police blockade during a protest against the Belo Monte Dam in 2012. The protest, led by Chief Raoni of the Kayapó, was joined by many Indigenous groups. Image by Brent Millikan/International Rivers via Flickr (CC BY-NC-SA 2.0).