A forest fire that has been spreading for weeks in Chile’s Tierra del Fuego is threatening the ancestral land of an Indigenous group and destroying some of the world’s highest concentration of peatlands.

The fires, which started in mid-January, have burned approximately 1,250 hectares (nearly 3,100 acres) of forest, peatland and grassland in the municipality of Timaukel, approaching Karukinka Natural Park on Isla Grande de Tierra del Fuego.

“This is an environmental, even global, emergency,” Barbara Saavedra, Chile director for the Wildlife Conservation Society (WCS), which manages the area, told Mongabay. “It’s not just a local problem because the forest that’s currently burning in Tierra del Fuego is some of the best conserved on the planet. The peatlands that are burning with the forests are some of the largest carbon reserves in existence.”

Peatlands, a swampy wetland ecosystem made up of semi-decayed plants and moss, only cover about 3% of the Earth’s surface but sequester more than 600 gigatons of carbon — far more than any other vegetation type, including forests, according to the IUCN, the global conservation authority. Peatlands are also vital for water storage and help regulate the watersheds of regional ecosystems.

Chile’s portion of Tierra del Fuego, an island that it shares with Argentina, has approximately 2.3 million hectares (5.7 million acres) of peatlands, making it one of the highest concentrations on Earth. Local fauna under threat from the fire include the llama-like guanaco (Lama guanico) and Fuegian culpeo fox (Lycalopex culpaeus lycoides), which is endemic to the area.

Fires aren’t a part of the natural environment here the way they are in the U.S. West, for instance; the name Tierra del Fuego (Land of Fire) was coined by the first Europeans who arrived, after they spotted the campfires set by the Indigenous inhabitants on the shore.

The burning this year was first detected on Jan. 20, but authorities inspecting the area couldn’t locate the flames and determined that they had gone out, according to WCS. But the fires appeared to return a few days later, this time in greater force, quickly burning several hectares. Fires in peat forests, unlike in other types of woodlands, can burn underground for months at a time, flaring back up on the surface long after they were thought to have gone out.

A yellow alert for the fire that was announced on Jan. 25 was changed to red later in the week, indicating that the situation would require more state resources, Saavedra said.

“All the carbon that is being emitted today is carbon that should have remained captured in those ecosystems,” she said. “Now it’s being released into the atmosphere in gigantic amounts.”

For thousands of years, the peatlands of Tierra del Fuego were stewarded by the Selk’nam Indigenous people. But colonization throughout the late 1800s and early 1900s drove the group out of the area. In recent years, descendants of the Selk’nam have solicited the Chilean government for official recognition as an Indigenous group, with many returning to Tierra del Fuego’s Isla Grande in hopes of rediscovering their roots.

“For us, [the fire] has been devastating in every sense of the word — ancestrally and environmentally,” said Herma’ny Molina, president of the Corporation of the Selk’nam People in Chile. “For thousands of years, our people lived there. We were violently removed 130 years ago and now we’re in the process of returning — and then this happens. Imagine the pain that this causes us.”

Patagonia has experienced several extreme fires in the last decade. In 2011 and 2012, Chile’s Torres del Paine National Park lost around 17,000 hectares (42,000 acres) of protected forest. And in 2013, El Torito Bay in Tierra del Fuego National Park, on the Argentine part of Isla Grande, lost around 1,640 hectares (4,050 acres) of forest and peatland to a fire that burned for more than two weeks.

In more recent years, the area has experienced unusually prolonged droughts, causing the peatlands and forests to dry up, resulting in faster-spreading fires, according to WCS. Some studies have attributed the trend to climate change.

Luis Barria, the mayor of the municipality of Timaukel where Karukinka Natural Park is located, told Mongabay there hasn’t been a confirmed cause of the fire but that it’s likely connected to human activity. 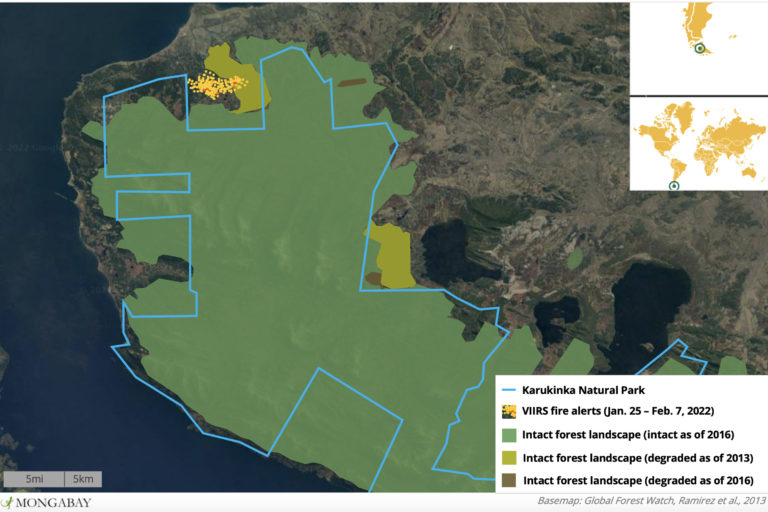 Government resources have reached the area quickly but there are still logistical challenges complicating firefighting efforts, according to WCS. For one, Tierra del Fuego is large and spread out. Karukinka Natural Park spans 300,000 hectares (741,000 acres) and the municipality of Timaukel is 1.29 million hectares (7,984 square miles). Personnel and equipment have to cross the Strait of Magellan to reach it.

Extremely windy conditions have also made containing the fire more difficult, according to WCS.

There are currently five planes working to put out the fire, as well as fire brigades from the National Forest Corporation and the military, among other government entities, according to the mayor’s office. Saavedra said WCS hopes that additional aid comes from Argentina and the United States. Chile has collaborative agreements with both countries to fight forest fires.

“We hope all of that can be mobilized if the fires continue,” she said. “Today, it’s not enough.”