To hear an audio reading of this article listen here:

The familiar striped skunk of North America (think of the cartoon Pepé Le Pew) has a lesser-known cousin: the spotted skunk. These polka-dotted relatives are smaller, about the size of a fat squirrel, and do impressive handstands to warn predators before they launch their stinky spray. And now, this skunk group has a few more members.

Researchers analyzed spotted skunk (Spilogale spp.) DNA and found that rather than the four skunk species previously recognized by science, there are actually seven. Their findings are published in the journal Molecular Phylogenetics and Evolution.

Scientists used DNA from 203 skunk specimens, both modern species and those preserved in museum collections. “If we’re trying to tell the full story of skunk evolution we need as many samples as we can,” Ferguson says. “For example, we didn’t have any modern tissues from Central America or the Yucatan. We were able to use museum collections to fill those holes.”

Skunks are notoriously difficult to study in the wild, partly because catching them is an easy way to get sprayed, and also because they are adept tree climbers who live in remote areas. For the researchers to get enough specimens to study differences in spotted skunk DNA, they used a method common in the days of the Wild West: wanted posters.

“We made wanted posters that we distributed across Texas in case people trapped them or found them as roadkill,” said Ferguson, who collected specimens for this project while working on his master’s degree at Angelo State University. “People recognize spotted skunks as something special, because you don’t see them every day, so they’re not the kind of roadkill that people just paint over.”

The paper’s first author, Molly McDonough, a biology professor at Chicago State University and research associate at the Field Museum, was able to extract DNA from century-old museum specimens. “It was really exciting to see who those individuals were related to. It turns out that one of those was a currently unrecognized, endemic species in the Yucatan,” McDonough said. 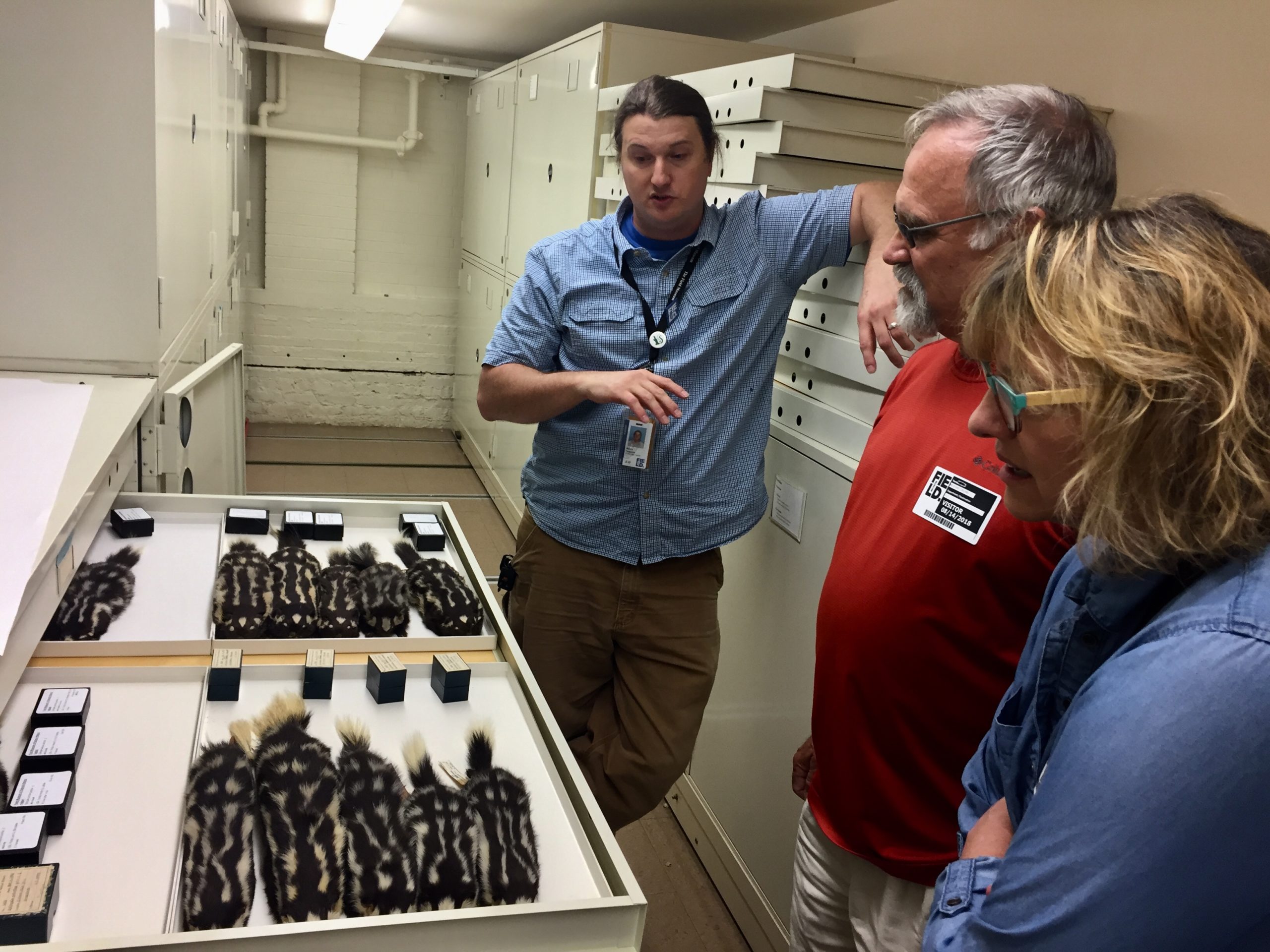 Spotted skunks are sometimes called the “acrobats of the skunk world” due to their impressive handstands that give predators a warning that a noxious spray is coming. Their liquid deterrent contains sulfur-based organic compounds called thiols, which let off a blast of scent reminiscent of rotten eggs — a smell that can linger for days or weeks in the fur of a predator or unlucky pet.

Handstands and rotten-egg-smelling defenses are not their only unusual features. Spotted skunks also do something called delayed egg implementation: breeding in the fall but not giving birth until the spring. Scientists think some animals do this to put off birth until conditions are more favorable, such as when temperatures are warmer and food is more readily available.

“They delay implanting the egg in the uterus, it just sits in suspension for a while,” Ferguson said. “We want to know why some species have delayed implantation and others don’t, and figuring out how these different species of skunks evolved can help us do that.”

Mapping out the different species lineages can also inform conservation efforts, Ferguson said. “Once something has a species name, it’s easier to conserve and protect,” he said. “If a subspecies is in trouble, there’s sometimes less emphasis on protecting it because it’s not as distinct an evolutionary lineage as a species.”

Among the new species, the Plains spotted skunk (Spilogale interrupta) is in significant decline. The working hypothesis, Ferguson told Mongabay, is that the species was hit with a double whammy of habitat and prey loss as industrial agriculture spread into the Great Plains regions of the U.S. where the skunks live.

For example, spotted skunks were once abundant in Iowa, living in the spaces between small family farms where their prey (rodents and insects) were easily found. However, as farms were combined into larger monocultures, these wild “in-between” spaces were swallowed up into rows of corn, soy, and other crops that are doused with pesticides, leaving with little to no healthy habitat or food for wildlife.

Currently, the Plains spotted skunk, is under consideration for listing as endangered under the U.S. Endangered Species Act at the subspecies level. Ferguson said this study adds credence to the argument that this species represents a distinct evolutionary significant line and “certainly warrants protection” as a full species.

Ferguson said he also hopes these new findings will “encourage local scientists to get out and study these species in their own backyards.”

Although North American mammals and carnivores are among the most studied groups of animals, scientists are still discovering and learning new things about them. For example, there is little published literature on the endemic Yucatan spotted skunk (Spilogale yucatanensis), and learning more about simple things such as what they eat and how they move around could be important to understanding and conserving regional populations.

“The next step, in my mind, is to see how these seven species differ from one another ecologically,” Ferguson told Mongabay, “as only then can we truly understand what it takes to conserve and protect these truly enigmatic small carnivores.”