by Chris Arsenault on 1 September 2021

The Brazilian Amazon has been transformed by fires and deforestation into a net emitter of carbon dioxide, rather than a sink absorbing the greenhouse gas, with dangerous implications for global warming, according to unprecedented research that tracked carbon data across the entire Amazon through satellite mapping data.

That’s according to the research published Aug. 25 by the Monitoring of the Andean Amazon Project (MAAP), an initiative of U.S.-based nonprofit the Amazon Conservation Association. On an annual basis, that’s about three times as much CO2 as the city of New York emits each year, according to calculations based on data from Carbon Visuals, a tracking site.

“For the first time, we have carbon data across the entire Amazon,” said Matt Finer, director of the MAAP and senior research specialist at the ACA.

This study is unique, he said, because it was able to “go deeper” in analyzing changes in forest emissions from different parts of the rainforest compared to previous research.

“Brazil literally has tipped as a whole from a [carbon] sink to a source, but the western Amazon and northeastern Amazon are keeping it together as a sink,” Finer said. “All of a sudden you go from the [Brazilian] Amazon to being a key buffer against climate change to putting its foot on the accelerator.”

In 2021, this area goes from carbon-rich rainforest to carbon up in smoke to the sky

The MAAP findings add more weight to the scientific consensus that parts of the Amazon have been transformed into net carbon emitters, said Nancy Harris, research director of the forest program at the World Resources Institute (WRI), a global nonprofit organization.

“The Amazon is one of the more well-studied rainforest regions of the world. When you have one paper that makes this shocking finding that the Amazon is no longer a carbon sink, you say that’s an interesting finding,” Harris told Mongabay in a phone interview. “But more and more research coming out of this area, using different CO2 measurements and making the same conclusions, is starting to resonate with people.”

Previous studies, including one published by Harris and her team at WRI in January that provided the raw data used in the MAAP research, established that parts of the Amazon now emit more CO2 than they sequester.

“We can’t blame scientific uncertainty; that reason for inaction [on climate change and deforestation] does not exist anymore,” Harris said.

In July, a study published in Nature also showed that the Brazilian Amazon is emitting more carbon than it captures. The research, led by Luciana Gatti from Brazil’s National Institute for Space Research (INPE), was the first to use direct atmospheric measurements across a wide geographic region, collected over nearly a decade and accounting for background concentrations of atmospheric gases.

Recent fires in the Brazilian Amazon, worsened by logging and other human activities, have intensified the forest’s transformation to a carbon source, Finer said. “The Amazon fires are just like this smoking visualization of what we are talking about: this was carbon in the rainforest, now it’s carbon in the atmosphere.”

Outside Brazil, however, the rest of the Amazon is still a net sink for carbon dioxide, according to the MAAP analysis. The northeastern Amazon, including sparsely populated countries such as Guyana and Suriname, fared the best of all regions in the world’s largest rainforest for CO2 emissions from the forest, according to the MAAP research.

Forests act as a carbon sink because trees absorb CO2 from the atmosphere through the process of photosynthesis. That CO2 is then sequestered, or stored, in the trees’ trunks, leaves and roots.

Indigenous territories and protected areas have been especially effective carbon sinks compared to other parts of the Amazon, the MAAP research found, while lands outside of these conservation zones have often been sources of new carbon emissions. This underscores how the administration of President Jair Bolsonaro — which has railed against demarcating new Indigenous territories and sought to strip away existing protections — has been particularly bad for conservation and climate change mitigation.

“It reinforces what has been known: protected areas are less deforested than unprotected areas,” Philip Fearnside, a research professor in the department of environmental dynamics at the National Institute of Amazonian Research (INPA) in Manaus, Brazil, told Mongabay of the MAAP research. Fearnside, who has studied deforestation in the Amazon for decades, wasn’t involved in the MAAP study. “The paper reinforces the need to maintain protected areas and take measures to deal with fires and deforestation.” 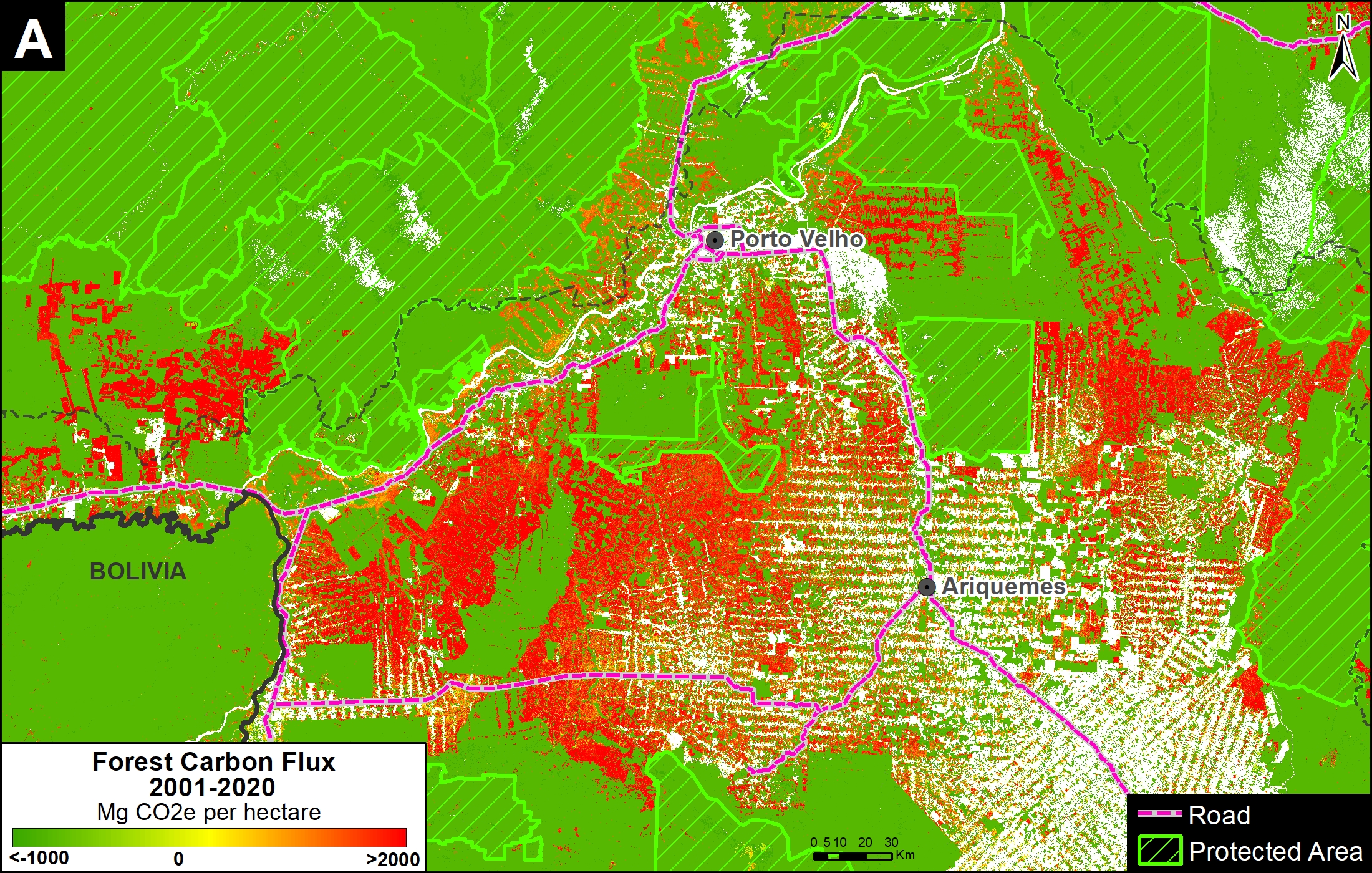 Deforestation along major highways cutting through Brazil’s rainforest, such as the BR-163 roadway in northern Amazonas state, has played a key role in undermining the Amazon’s capacity to absorb CO2 and act as a buffer against climate change, according to the MAAP research.

Large clusters of deforestation, transforming parts of the Amazon into sources of carbon emissions as shown in the MAAP data, are directly tied to highways allowing loggers, farmers and land speculators easier access to the forest, Fearnside said.

This situation could worsen under a plan by some Brazilian lawmakers, backed by Bolsonaro, to build another highway through the Amazon connecting Brazil to the Pacific coast via Peru, Fearnside said. The proposal calls for downgrading the protected status of Serra do Divisor National Park, a protected area on the Brazil-Peru border, allowing the motorway to cut through the park’s territory.

“That is a huge block of forest that is basically untouched,” Fearnside said of the park and surrounding forest, an important carbon sink. If the highway is built, the area could easily switch into becoming another part of the Amazon that’s a CO2 emitter, he added.

Finer said the Amazon faces two potential “tipping points” for irreparable degradation. The first, which has been well documented in previous studies, involves deforestation and changing rain patterns transforming swaths of the rainforest into a drier, sparser savanna, he said. The second, interconnected, tipping point is the Amazon’s shift from carbon sink to carbon source.

Passing these tipping points will have major impacts on climate systems beyond South America, Harris said. “The planet’s systems are all connected; what happens in one area of the world impacts other areas, based on how water and energy flow,” she said. “If we are removing rainforest ecosystems in the Amazon, that is going to impact climate conditions in the central breadbasket in the U.S.”

Protected areas and Indigenous reserves “are still the critical piece holding this all together,” Finer said. “They represent the short-, medium- and long-term best bet in keeping the Amazon as a carbon sink.”

Banner image: Recent fires in the Brazilian Amazon, along with logging and other human activities, have intensified the forest’s transformation to a carbon source, according several scientific studies. Image courtesy by Sergio Vale/Acre state.