In Brazil’s different biomes, each environment offers a distinct experience. An unspoiled natural landscape is not only a precious reservoir of biodiversity, it can also be a feast for the senses.

In the superlative Amazon rainforest, sounds radiate on all levels and life abounds, from the carpet of fungi and organic matter in the soil up to the tops of the tallest trees. In the Atlantic Forest, bromeliads, orchids and ferns drip from the humidity of the rainforest that is filled with waterfalls and known for its high degree of endemism. Occupying a vast territory between the two forests, the Cerrado is the richest savanna on the planet, where the unique blue of the sky adorns the natural paths of buriti palm trees – immortalized in the books of Guimarães Rosa. And the Caatinga, the only exclusively Brazilian biome, which surprises scientists on a daily basis for its ability to conceal forms of life, even in places where drought can last virtually year round, such as the Raso da Catarina region of Bahia.

Brazilian biomes are exuberant displays of the planet’s biodiversity. When combined with other tropical ecosystems around the world, they are home to the overwhelming majority of the Earth’s biodiversity.

On the platform Hiperdiversidade, an international team of researchers associated with the Sustainable Amazon Network (RAS), along with journalists from Ambiental Media, analyzes the most biodiverse portion of the planet and points to the need for coordinated strategies from various social actors and governmental agencies in the quest for policies and projects capable of preventing the collapse of the natural heritage.

When browsing the site, one gets a notion of the dimensions of Brazil’s biological wealth and its role in this scenario. “The project emerged out of the desire to offer a didactic, visual experience of the proportions and relevance of the richness of Brazil’s biodiversity. The idea is to share with the public a clear vision of what’s at risk of being destroyed. The tropics are the heart of life on the planet and Brazil is the epicenter of this drive zone,” explains journalist Thiago Medaglia, the project’s editorial coordinator. 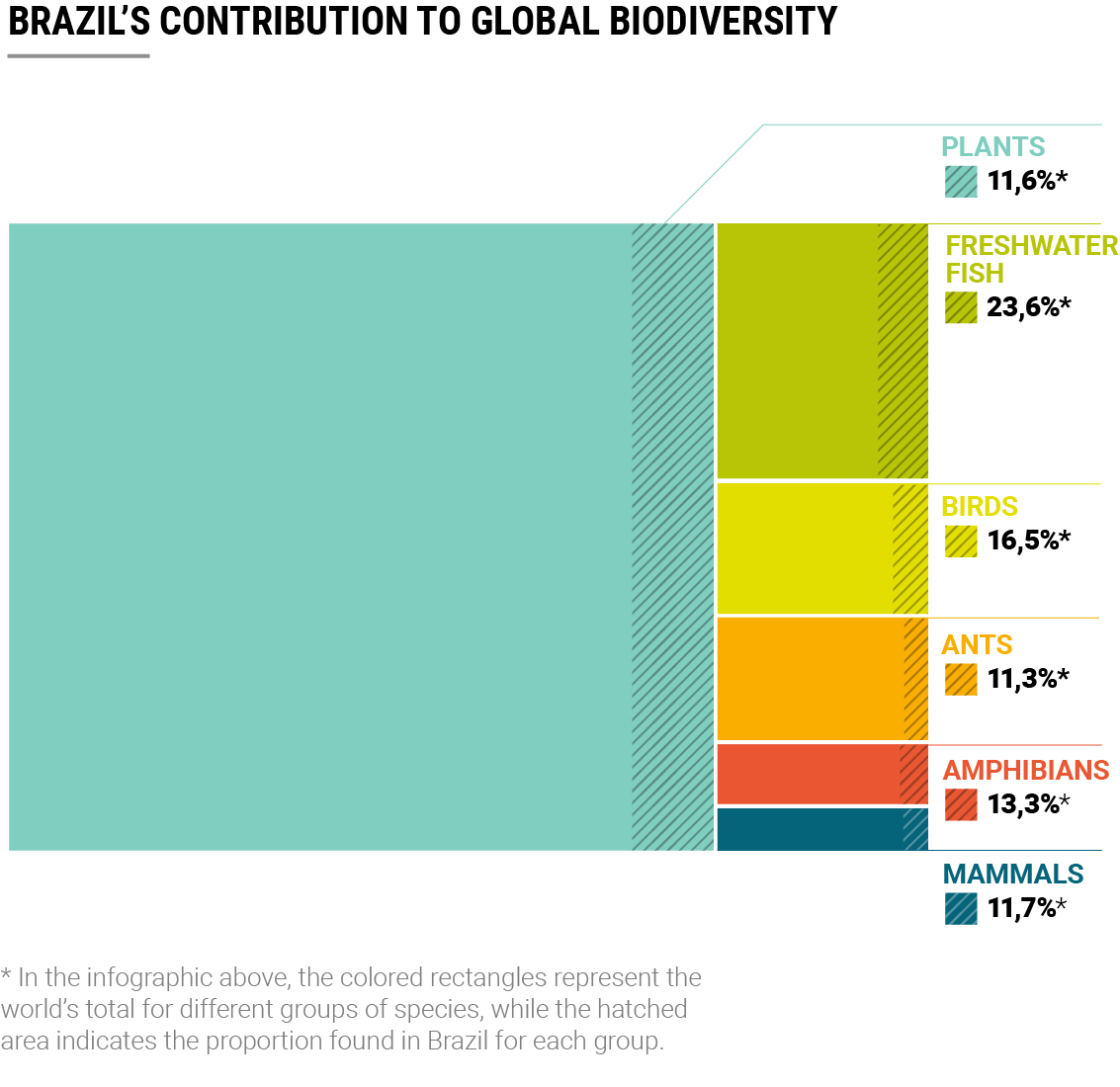 But what is the secret that leads to the profusion of life forms in the tropics?

Biodiversity increases as we move from the poles towards the equator – an effect known as the latitudinal biodiversity gradient. Heat and humidity stimulate the development of countless forms of life: the tropical zone occupies 40% of the planet’s surface and it extends across forests (the Amazon is the largest of all), savannas (like the Brazilian Cerrado), bodies of freshwater (which receive half of the world’s rain) and shallow-water coral reefs, bursting with colorful lifeforms.

Remarkably, these environments are home, at least seasonally, to over 90% of all terrestrial birds, 85% of all species of insects and over 75% of amphibians, land mammals, freshwater fish, flowering plants (known as angiosperms) and marine fish. The tropical latitudes are also home to almost all zooxanthellate corals – corals that have a kind of algae in their tissues. Furthermore, a disproportionate number of species are exclusive to the tropics; for instance, endemism of terrestrial birds is six times higher than in temperate regions.

Between 15,000 and 19,000 species are discovered every year, most of them in the tropics. “For example, even though 500 spiders are described each year, this is only a small fraction of the estimated 150,000 tropical species,” says Jos Barlow of the University of Lavras in Brazil and Lancaster University in England. Barlow has been researching in the Brazilian Amazon for over two decades and he coordinated the study “The future of hyperdiverse tropical ecosystems,” published in the renowned scientific journal Nature in 2018.

Brazil alone accounts for 17% of the entire terrestrial territory of the tropics, an area equivalent to that of Oceania. And it is home to colossal wealth: the diversity documented there is more plentiful than entire continents. Over 20% of the freshwater fish on the planet (3,600 species) and 17% of all birds (1,900 species) are found in the country. 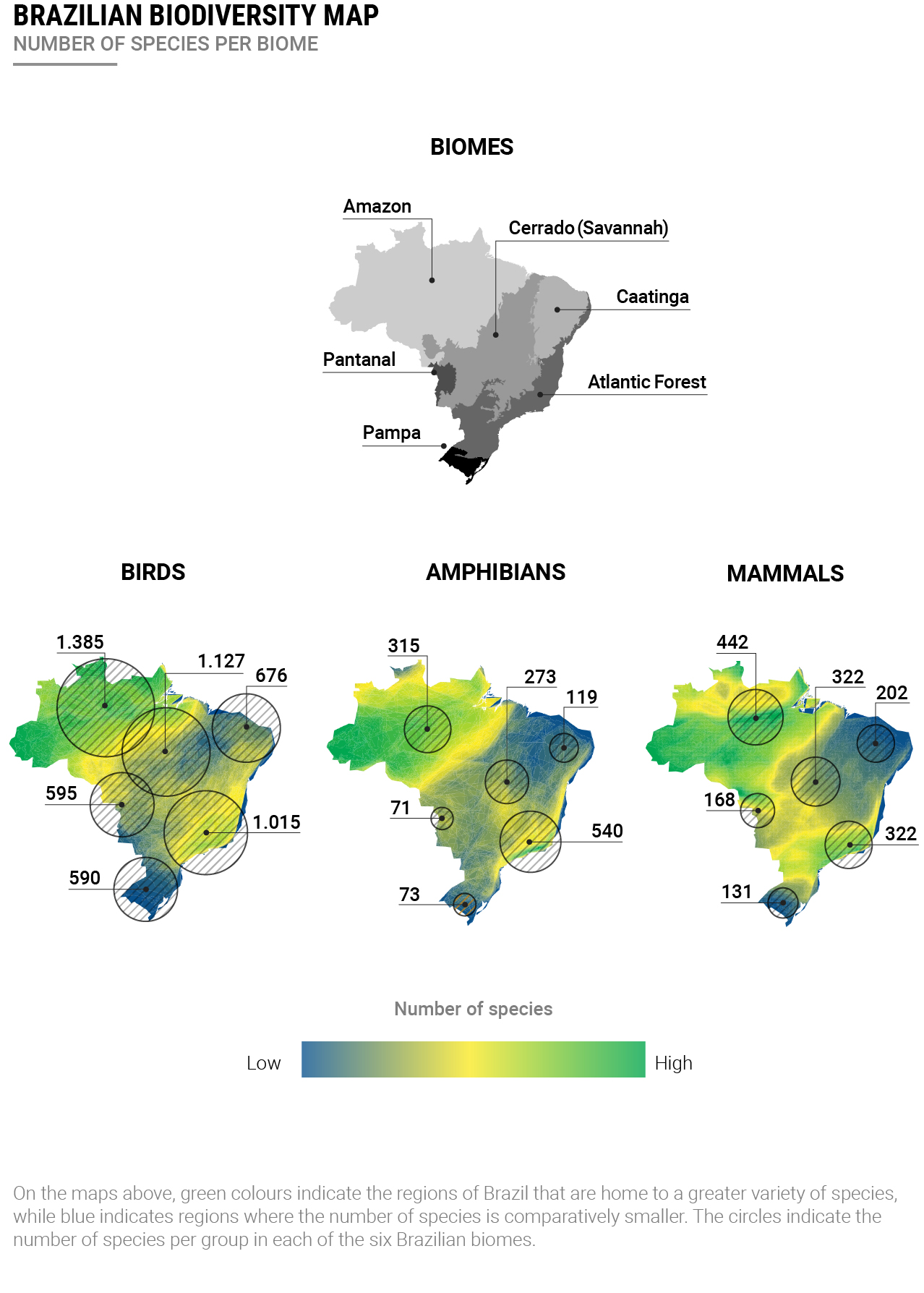 The riches of the Amazon

It is estimated that the biomass of the Amazon rainforest currently retains 100 billion tons of carbon, the equivalent of more than ten years of global emissions from the burning of fossil fuels.

Wild in its depths, the Amazon rainforest is such a vast natural heritage that, centuries after the first naturalist expeditions, the secrets it continues to keep from scientists are infinite. The documentation of its life forms has only just begun.

“When scientists discover a new species, they open the gates to a world of other related data,” says Barlow. For example, 20 new primate species were described in the Amazon in the last two decades, including the Parecis titi, (Plecturocebus parecis) discovered on the Chapada dos Parecis, a plateau in southern Rondônia, in 2016.

“Even places close to human communities hide life forms that are still unknown, hence the importance of field studies,” says Filipe França, senior researcher at the Lancaster University in the UK.

In 2019, researchers identified a new species of marmoset in an area that had been altered for decades by intense human presence in southeastern Pará, on the banks of the Tapajós River, inside the so-called “arc of deforestation.” Christened the Mico munduruku, in reference to the Munduruku indigenous people, it is distinguished from the Amazon’s other small primates by its white tail. Projects for new hydroelectric plants further limit the restricted habitat of species observed thus far.

New descriptions in groups of lesser known species are much more common. “We must keep in mind that ‘new’ species are often already known to the local populations – they’re only new to scientists,” emphasizes Erika Berenguer, senior research associate at Lancaster and Oxford Universities in the UK.

In 2018, a new family of fish was registered in the Amazon, the Tarumaniidae, whose specimens have the habit of hiding in deep mudflats filled with leaves. It was the first description of a South American fish family in 40 years. And the most surprising part: in the biome that is home to the most extensive and complex river system on Earth, specimens of the only species in the family, tarumania (Tarumania walkerae), were collected by the banks of the Tarumã-Mirim River, on the left bank of the Rio Negro, just kilometers from Manaus, a city with one of the highest population densities in the Amazon.

Extending far beyond its own physical limits, the ecological processes driven by the largest tropical forest on the planet are responsible for maintaining the balance of different natural systems on a local, regional and global scale. One good example of this are the so-called “flying rivers,” the huge volumes of water vapor that the vegetation releases into the atmosphere.

According to data from INPA, the National Institute for Research in the Amazon, a tree with a crown diameter of 10 meters is capable of releasing into the atmosphere 300 liters of water captured in the soil on a daily basis. As much as 8 trillion tons of water circulate over the Amazon in the evapotranspiration system every year. This tremendous humidity is returned to the ground in the form of rain, over the forest itself or carried by the air currents to the glaciers and springs of the Andes.

In the other direction, the flying rivers guarantee the maintenance of the rains and supply the river basins of Brazil’s Midwest, Southeast and Southern regions, as well as neighboring countries. “It is estimated that 70% of the rainfall in the Rio de la Plata basin, in the south of the continent, which covers an area of 3.2 million square kilometers and is shared by several countries, comes from the evaporation in the Amazon,” says Erika Berenguer.

The rains guarantee the production of Brazil’s agribusiness, directly revealing the benefits of balanced nature. In agriculture, examples of the economic value of biodiversity abound. Through pollination and biological control, insects contribute to the production of the fruits and vegetables that feed the Brazilian people. According to a calculation by BPBES (the Brazilian Platform of Biodiversity and Ecosystem Services) published in 2018, “the value of the ecosystem’s pollination services for food production is around R$43 billion per year” in the country.

The diversity around us

“Birds also play many important roles, as predators, pollinators, scavengers and seed dispersers. The ability to fly allows them to offer these services free of charge, and they are invaluable in helping to restore degraded ecosystems,” explains Alexander Lees, an ornithologist at Manchester Metropolitan University in the UK.

However, if an ecosystem loses its primordial characteristics, the conditions of the habitat drastically worsen for the species, sometimes trapping animals in veritable niches of survival – like the golden lion tamarin (Leontopithecus rosalia), restricted to a fragmented forest area in the state of Rio de Janeiro.

To make matters worse, “there is an equation that is difficult to solve in the country: the capacity to invest in basic research to inventory and survey biodiversity is inferior to the speed of changes in ecosystems,” says Gustavo Martinelli of the Rio de Janeiro Botanical Garden. In other words, animals and plants are in danger of disappearing before our scientists can get to know them.

“The loss of species is worrying,” says Filipe França. “When they disappear, the benefits they represent for nature and for people go with them.”

The International Union for Conservation of Nature (IUCN) has assessed the conservation status of more than 134,000 species of animals so far, and it aims to reach 160,000. IUCN researchers consider over 28,000 species to be at risk of extinction. They comprise the dreaded Red List. For each of the five groups of vertebrates that have been comprehensively assessed by the IUCN and for which spatial occurrence data is available, species classified as vulnerable, threatened or critically threatened are more dependent on tropical environments than those classified in the “least concern” category.

“The combination of influences from local factors, such as deforestation, and global agents, such as climate change, will determine whether or not the endangered species survive,” explains Alexander Lees, a former member of the Red List collaborators panel. As shown in the study published in Nature, “more than half of all species in the tropics are susceptible to the dual influence of these factors,” he says.

“Extinctions have always existed and they will continue to exist. The issue of concern is that the disappearance rates today are much higher than in the past,” Erika Berenguer emphasizes. “A world with fewer species is not only poorer, it’s also less beautiful. With every species lost, we also lose part of the enchantment that the natural world can provoke in us.”