For Malagasy trapped in poverty, threatened lemurs and fossas are fair game

by Malavika Vyawahare on 4 August 2021

In Madagascar’s jungles, the fossa (Cryptoprocta ferox) is king. A cousin of the mongoose, this cat-like creature is the island’s top predator, able to hunt Madagascar’s other unique offering to the world: lemurs.

Humans feed on both. The problem: lemurs and fossas are threatened and endemic species protected under Malagasy law. About half of the households surveyed in a recent study reported eating lemur meat and a quarter had consumed fossa meat.

Consumption of wild meat is considered a major threat to conservation efforts by protected area managers in other parts of Africa too. To design an intervention to reduce hunting pressure, researchers from the Wildlife Conservation Society (WCS) interviewed people living in and around Makira Natural Park (MNP). They wanted to gauge the significance of lemur and fossa meat in local diets.

These hunters don’t seek to deliberately break laws; they’re mostly villagers falling back on survival tactics that have existed in their communities for millennia. Bushmeat is important in their diet, which is otherwise rice-heavy and lacks protein. Lemurs and fossas, Madagascar’s largest mammal, are hefty meat sources.

They also hunt the indri (Indri Indri), the biggest lemur in existence today. This long-limbed primate sports panda colors and grows to up to 72 centimeters (28 inches). Despite its gangly appearance, it’s quite acrobatic, bounding from tree to tree.

MNP is one of the last remaining refuges of the indri, and is also home to 16 other kinds of lemurs. At least three of them are critically endangered: the indri, the silky sifaka (Propithecus candidus), and the black-and-white ruffed lemur (Varecia variegata subcincta).

The criminality of the practice makes broaching the subject of eating these animals difficult. It’s not always a question of legality, though; in Madagascar, there are often social conventions that prohibit the consumption of certain animals. Hunting the indri, also called babakoto, meaning “ancestor of man,” is considered taboo in parts of the island.

The research team relied on the unmatched count technique (UCT), a kind of a picture game, to glean information about dietary preferences. Surveyors use two display cards, each with a set of photos depicting locally consumed meat. One of the cards, called a treatment card, carries an additional photo of the animal that is of interest to the researchers. Interviewees are not directly asked which types of meat they eat. They are asked the number of items on each card they consumed over the past year. Investigators look out for a mismatch in the number quoted.

The surveys were conducted over five months from the end of 2019 to early 2020. Surveyors fanned out to cover 16 villages adjacent to MNP and four inside the park.

These interviews revealed that 53% of 659 households had eaten lemur meat in the past year and 24% of them had eaten fossa meat. The study authors also conducted surveys in another group where they asked point-blank about meat consumption. There was significant underreporting when the questions were posed directly, according to their data. For fossa meat, the direct-questioning-based estimates were 12 times lower than those obtained from the UCT method.

“It is a huge difference between the UCT estimates and direct questions, but they designed the study well, piloted the survey instrument thoroughly to ensure it was working, and validated results by collecting data via direct questions from separate respondents,” said Harriet Ibbett, a conservation scientist at Bangor University, U.K., who was not part of the study.

The researchers noted that their results regarding lemur meat intake were consistent with a comprehensive study published in 2009 by Christopher Golden at Harvard University, who has worked in the region for more than two decades. Golden’s team used direct questioning to determine that 52% of the households around MNP eat lemur meat. However, the WCS researchers’ estimate for fossa meat consumption was much higher than what Golden’s team found.

“This could be due to real differences in fossa consumption patterns around Makira Natural Park and to the use of different survey methods,” the study authors wrote. The discrepancy raises questions about which is the more reliable method of collecting information on taboo subjects.

Ibbett also said the question on lemur meat in the WCS study was “very broad, rather than species specific, which may also be another reason for the high prevalence.” To find out real consumption levels would require more information about how often hunting took place and what quantity of meat was secured this way. Such information is easier to dig out with direct questioning.

Whether captured directly or indirectly, the data show that bushmeat consumption is a significant threat to the species in question. How big a danger depends on where it’s happening and to which species. In the case of lemurs, nearly all 108 known species face extinction, with 33 species being just one step away from extinction in the wild.

Neither lemurs nor fossas reproduce quickly. Indri females, for example, give birth to an offspring every two to three years, and pregnancies last four to five months. Like most primates, lemur families spend years nurturing their young ones, and the loss of each individual is a jolt to their shrinking populations.

While in extreme cases it is possible to eat a species out of existence, research in Makira suggests that population decline leaves them more vulnerable to other threats. These other dangers abound in Madagascar. In MNP itself, rapid deforestation has gnawed away at lemur habitat. The park is one of the most expansive protected areas in Madagascar, with 372,470 hectares (920,393 acres) of low- and mid-altitude rainforest — one of the last remaining blocs of intact rainforests on the island.

Makira was declared a national park in 2012 and is jointly managed by WCS, a U.S.-based international NGO working in the country since 1993, and neighboring communities. The NGO also conducts conservation activities in some of the villages surveyed for this study. 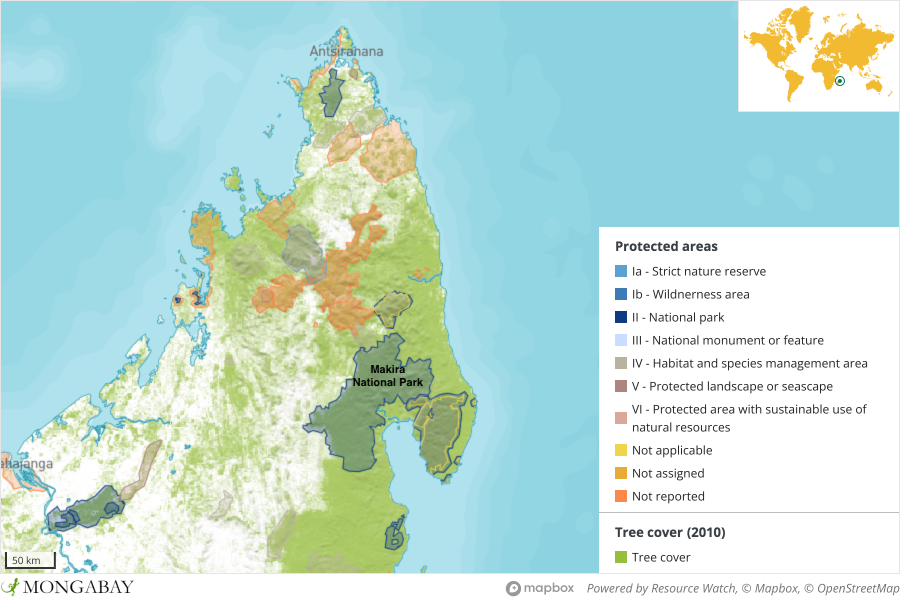 Around 90,000 people in the area depend on the forests for timber and firewood. Green cover is also lost to slash-and-burn agriculture. Hunting pressure along with shrinking habitats could lead to the local extinction of the indri, along with four other lemur species, a 2018 paper warned.

Slingshots, spears and nets are commonly used for hunting lemurs. Hunters also place snares on paths frequented by animals, a knowledge that is passed down through generations. Because lemurs love to hang out in forest canopies, another traditional hunting method involves luring them onto deliberately isolated wood bridges that connect forest fragments or lead to a favored fruit tree. Snares are placed on these overground passages to entrap them.

Like in many other parts of Madagascar, curbs on traditional activities here that arise from conservation initiatives are not always welcome. “The increased attention and management under state law transformed community members’ relationship with their environment by imposing a sense of crime and malfeasance on traditions and customs to which they felt entitled,” a 2015 study centered on MNP noted.

WCS’s current research will feed into a “behavior change campaign” to promote alternatives to hunting: poultry farming, fish farming, and harvesting of edible insects. “Evidence that bushmeat species are not generally preferred meats suggest that projects which increase the availability of domestic meat and fish may have success at reducing demand,” Pierre Walter, who coordinates WCS’s Sustainable Wildlife Management (SWM) program in Makira, said in an emailed response.

The NGO is trying to help people switch from eating highly threatened species to more “resilient wild and domestic species,” like chicken and fish.

The project falls under a broader SWM initiative launched in 2018 with the dual aim of promoting wildlife conservation and food security. It is being implemented in 15 African, Caribbean and Pacific countries, including Madagascar, and is largely funded by the European Union.

(Editor’s note: The story has been updated to correct the number of countries where Sustainable Wildlife Management program is currently being implemented.)