Stretching along the narrow spit of land that connects the Malay peninsula to the rest of mainland Southeast Asia, Myanmar’s Tanintharyi region is home to a confluence of animals and plants from north and south – as well as many that exist nowhere else. From endangered Malay tapirs (Tapirus indicus) and lar gibbons (Hylobates lar) to secretive geckos only recently discovered by scientists and tiny Gurney’s pittas perching on the brink of extinction, Tanintharyi’s forests are a refuge for many.

While Tanintharyi is no stranger to deforestation, its remoteness and history of human conflict has meant it has experienced less habitat loss than many other parts of Myanmar. However, this comparative respite appears to have come to end. Satellite data from the University of Maryland (UMD) visualized on Global Forest Watch show deforestation is ramping up in many parts of the region, particularly in Mergui and Kawthoung districts, which encompass the southern two-thirds of Tanintharyi. 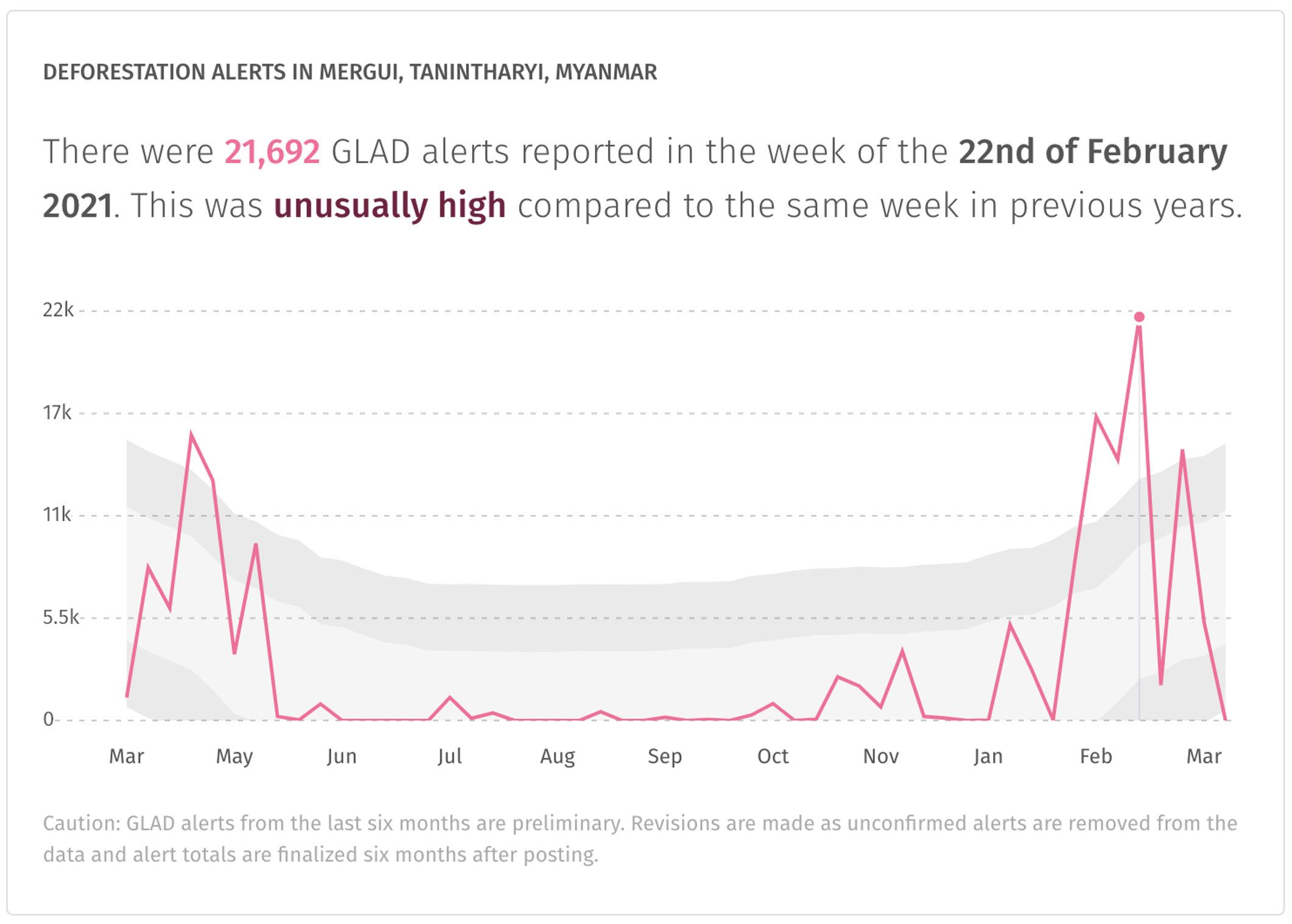 One of the parts of Tanintharyi that appears to be getting hit the hardest is an area of forest straddling the border between Kawthoung and Mergi. Here live the last known Gurney’s pittas, a small round bird with a stubby tail that was presumed extinct until the species was rediscovered in the 1980s. Recently, the species has experienced a swift decline, from an estimated 10,300 to 17,100 individuals in 2004 to between 1,000 and 2,500 in 2019, prompting the IUCN to list the species as critically endangered.

Researchers who published a survey study in Oryx in 2019 attribute the pitta’s plummet to habitat loss. Study co-author Nay Myo Shwe told Mongabay in 2020 that “the remaining suitable habitat for the Gurney’s Pitta is in serious decline” and that this should “sound the alarm …. [to] conservationists, organisations, government officials and key stakeholders.”

Things appear to only have gotten worse for the pittas in 2021. Satellite data show deforestation eating up vital habitat in the few places where Nay Myo Shwe and their colleagues were able to find Gurney’s pittas. Several of these areas occur in Ngawun Reserved Forest, which, together with an area to the south, has been proposed as a new national park called Lenya. However, the rollout of Lenya National Park has been stymied in controversy, with critics saying the park, together with other proposed and established protected areas in Tanintharyi, violate the rights of Indigenous communities. 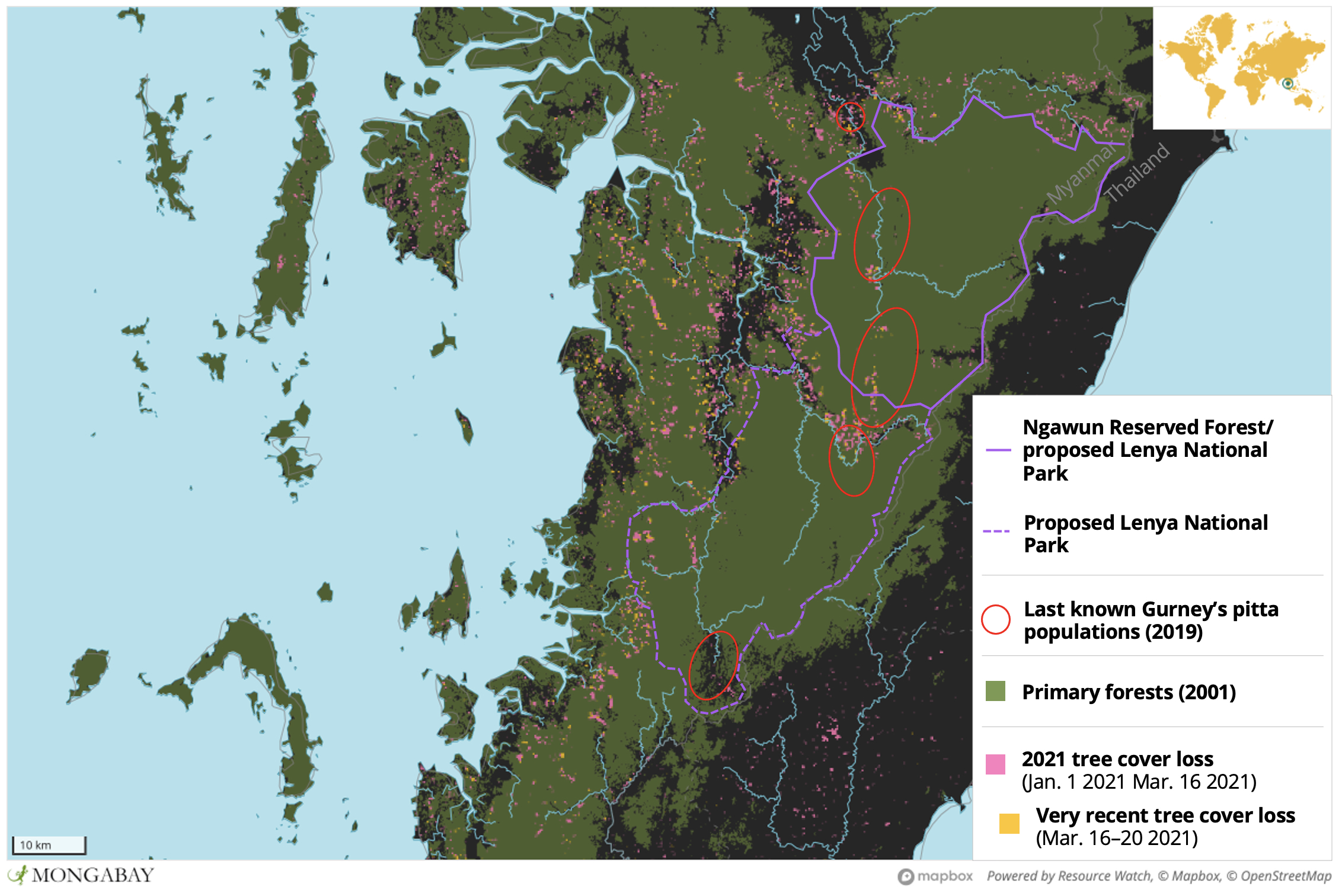 Much of the forest here is underlain by limestone, which through time has been eroded into fissures and gullies and isolated microhabitats, making it ripe for the evolution of unique species. In 2015 and 2016, researchers uncovered two new-to-science species of bent-toed geckoes (genus Cyrtodactylus), which they described in a study published in PLOS ONE in 2017. In 2019, another group of researchers described another new gecko in Biotaxa, this one an Asian rock gecko (Cnemaspis tanintharyi).

“A key take-home message from our research is that scientists still have a lot to learn about the biodiversity of southern Tanintharyi,” PLOS ONE study co-author Grant Connette told Mongabay in 2020. “The two gecko species we described in our paper, as well as several others described later, are not known to occur anywhere else in the world.”

Connette lamented that continued deforestation could mean species could become extinct before the word even gets a chance to even know about them.

“It is possible that this habitat loss could mean the loss of species that scientists never even knew existed,” Connette said.

Justin Lee, a researcher at the National Museum of Natural History at the Smithsonian Institute in the U.S. who also uncovered a new gecko species in Tanintharyi, told Mongabay in 2020 that losing undiscovered species is “a sad and unfortunate reality that many scientists in the field face. It’s hard to fathom how much biodiversity has been lost because of deforestation across the tropics.”

This part of Tanintharyi is under pressure from several fronts. A study published in Applied Geography in early 2021 and led by Marc Schmid of the University of Bern in Switzerland found deforestation between 2002 and 2016 was driven by small-scale agriculture and the expansion of commercial oil palm and rubber plantations (which researchers say are often guises that allow companies to legally log native forest for the timber market). But, the authors caution, deforestation by smallholder farmers may often be a side-effect of commercial plantation expansion: as plantation companies gobble up land where a small farm once was, that farmer may have little choice but to reestablish their crops in the forest.

Further complicating habitat protection is the region’s history of conflict. Myanmar has the dubious distinction of holding the world’s longest civil war, which has been ongoing for more than 70 years. Schmid and his coauthors write that people who have been internally displaced by war are trying to eke out a living by farming in Tanintharyi’s forest – particularly in the area comprising the proposed Lenya National Park.

Portions of the region’s forests are also under control of the Karen National Union (KNU), a separatist group that has been vying for independence since the war began. Schmid and his colleagues caution that KNU policy differs from that of the Myanmar government and that conservation efforts need to reflect the requirements of both or else risk further upsetting the 2012 ceasefire agreement between the two.

However, the ceasefire may already have been broken as tensions have surged with the ousting of Myanmar’s civilian government by the military in February. In Tanintharyi, military incursions have reportedly killed several and forced 8,000 to flee their homes over the past several months – the largest displacement in the region in 10 years. With no other options, many of those displaced are seeking refuge in the surrounding forests, according to the Karen Women’s Organization.

In their study, Schmid and his coauthors write that conservation action should address the needs of both people and wildlife, and be careful not to worsen an already volatile situation.

“Sustainable development in this global biodiversity hotspot requires careful land use planning to support nature and people and to avoid the resurgence of smouldering conflicts,” they write.