by Malavika Vyawahare on 23 September 2020

The Aldabra coral atoll is a place of mythical beauty, uninhabited and so lost to the world that chartered flights and boats are the only way to get there. But humans have still found a way to leave their mark.

Flip-flops from all over the planet are piling up on the atoll. During a five-week cleanup campaign in 2019, volunteers removed 60,000 plastic slippers. An estimated 370,200 are still strewn on Aldabra’s four islands that enclose a vast lagoon.

“That was one of the biggest shocks when we actually started cleaning the beaches and the coastline,” said April Burt, a marine biologist at the University of Oxford who led the efforts. “[Y]ou get these big piles, meters high, of just flip flops.”

Lockdowns and border closures have not affected the traffic of trash that rides ocean currents to reach this sunny sector of the southwest Indian Ocean.

Aldabra is one of 155 isles that make up Seychelles, a small island nation with fewer than a million people that is facing a big plastic waste problem. According to research published by Burt and her team in Scientific Reports recently, the atoll has more plastic trash per square meter than any other island. 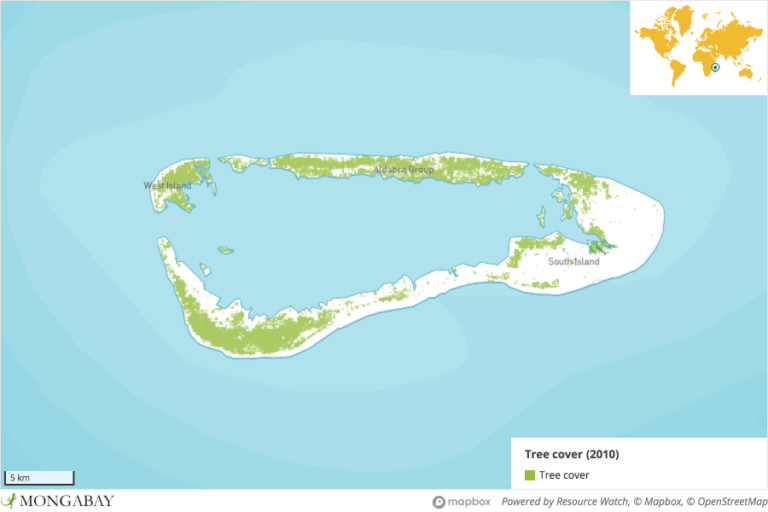 Spanning 155 square kilometers (60 square miles), Aldabra is the second-largest atoll in the world; the lagoon itself is more than three times the size of Manhattan. With the clear blue lagoon on one side of the raised coral rim and the ocean on the other, it is easy to forget that biodiversity is under siege all over the world. Its lagoon, mangroves, corals reefs, and seagrass beds brim with life.

While the dodo of Mauritius, also located in the southwest Indian Ocean, is emblematic of the extinction crisis, the Indian Ocean’s natural riches are well preserved on this remote outpost of Seychelles. It’s home to the only remaining flightless bird from the Indian Ocean — the white-throated rail (Dryolimnas cuvieri) — and one of the planet’s two oceanic flamingo populations.

It’s also a haven for giant tortoises (Aldabrachelys gigantea), famed for outliving the scientists who study them; the tortoises can easily clock 100 years or more. These sizeable tortoises are the last of the Indian Ocean’s giant tortoises; their counterparts were hunted to extinction in the neighboring islands of Mauritius and La Réunion. A carefully guarded population of more than 150,000 now lives among the litter of human civilization in Aldabra.

Located more than 1,000 km (620 mi) from the central cluster of Seychellois islands, the atoll is also an important nesting site for endangered green turtles (Chelonia mydas). Guided by an still-undeciphered instinct, these turtles return every year, often swimming thousands of kilometers, to the site of their births. On Aldabra’s sandy shores, they dig nests and lay their eggs.

Researchers noticed that the plastic mounds could become an insurmountable hurdle for some female turtles at the end of their long journeys as they undertake a laborious crawl from the sea to the most secure nesting spots on the beach. Newly hatched baby turtles, too, can get entangled in plastic debris as they scramble out from underground nests in droves and dash for the security of the sea.

Burt and her team also documented birds like the Malagasy sacred ibis (Threskiornis bernieri) struggling with beaks clamped shut by bottle caps. Though no systematic evaluation of the impacts has been done yet, scientists like Burt fear hard-fought conservation gains could be undone by plastic trash that will outlive even the sturdy tortoises.

Aldabra was declared a UNESCO World Heritage Site in 1983. It’s managed by the Seychelles Islands Foundation (SIF), which organized the trash collection campaign last year. A group of 12 volunteers from Oxford University and Seychelles camped out on the island and spent eight hours a day gathering the junk. They were astonished to discover that almost a quarter of the waste they collected was flimsy footwear.

Flips-flops are ubiquitous; they’re cheap and widely used in the countries that fringe the Indian Ocean. Low-quality slippers are replaced frequently, and in the absence of proper waste management systems, these discards end up in the ocean.

The volunteers also picked up substantial amounts of fishing gear like nets, buoys and fish-aggregating devices, which are contraptions laid out to attract fish. When the researchers crunched the numbers to estimate total waste on the island, the fishing industry turned out to be the biggest culprit, responsible for 83% of the total waste by weight.

Until last year, there were no regulations stopping fishing vessels from dumping waste in Seychellois waters. In 2019, Seychelles signed Annex V of MARPOL, the global convention that regulates ship pollution. This annex specifically prohibits garbage dumping by fishing boats.

MARPOL came into force in 1983, after a spate of tanker accidents. Annex V was incorporated into the convention in 1988, and a total ban on plastic waste dumping was central to it.

Humans have produced more than 6.3 billion tons of plastic waste to date, enough to outweigh nearly 1,000 Giza pyramids. In 2016, about 20 million tons ended up in aquatic systems, a new study in Science found. Without any substantial efforts to reduce this footprint, it could swell to 90 million tons by 2030.

The authors of the Science paper warn that even ambitious efforts to curb plastic pollution will not outpace plastic waste generation.

On Aldabra, the cleanup recovered 25 tons of plastic rubbish, but more than 500 tons still remain. Its remoteness has sheltered Aldabra for centuries, but it also makes cleanup operations particularly challenging and costly.

The study authors are calling for garbage removal operations to be an integral part of efforts to combat plastic pollution, especially in small countries like Seychelles, which struggle to deal with their own plastic. Most of the country’s waste is sent to landfills; it does not have any plastic recycling facilities. What complicates matters is that plastic waste in water requires more sophisticated recycling.

In a SIF video about the garbage collection exercise, Seychelles President Danny Faure said, “Aldabra atoll must be protected at all costs.” It turns out the cost of just ridding the place of plastic could be as much as $7.3 million. That’s about the cost of 243,000 pairs of flips-flops at $30 a pair.

Scientists say humans will not hit “peak waste” until 2100. The thought of trash continuing to pile up on Aldabra for another eight decades is unthinkable for Burt. “It is unacceptable at this iconic site, as it would be if the same amount of plastic rubbish had been allowed to accumulate in one of the world’s great museums or art galleries,” the authors write.