Note: CIMB has issued a response to this piece.

It’s that time of the year: Indonesia is burning once again. Miles and miles of primeval forest are being lost to illegal fires amplifying the catastrophic loss of biodiversity and resulting in colossal carbon emissions.

Most of the land is deforested to make way for that one ubiquitous commodity — palm oil; also involved are rubber, timber, pulp & paper sectors. Companies responsible for illegal clearing have been linked to dozens of listed corporations, repeat offenders, across Indonesia, Malaysia and Singapore.

Increasingly, financial institutions are being brought into the spotlight for their role in financing deforestation. Malaysian banks, despite being the largest financiers of palm oil and other forest-risk sector businesses in the region, are the worst performers on environmental, social and governance (ESG) risk assessment and mitigation.

CIMB Group though is starting to stand out in view of the recent uptick in sustainability initiatives. However, its vision remains deliberately narrow, for it disregards the breadth of issues stemming from forest risk sectors (which, aside from deforestation and its climate effects, include peat development, land rights violations, labor abuses and corruption).

As a major lender to forest-risk companies in Malaysia and Indonesia (through its IDX-listed subsidiary PT Bank CIMB Niaga), CIMB doled out more than USD4 billion in forest-risk credit between 2014 and 2019 (August), 88% of it to the palm oil sector. (This number is anything but a very rough estimate of the true total that is much higher; plus, it does not contain the bank’s possible shareholdings in the same companies and participation in a multitude of syndicated loans.) Its client list includes companies, such as Asia Pulp and Paper and Wilmar International, implicated in recurring fires and toxic haze in the region as well as local community issues. 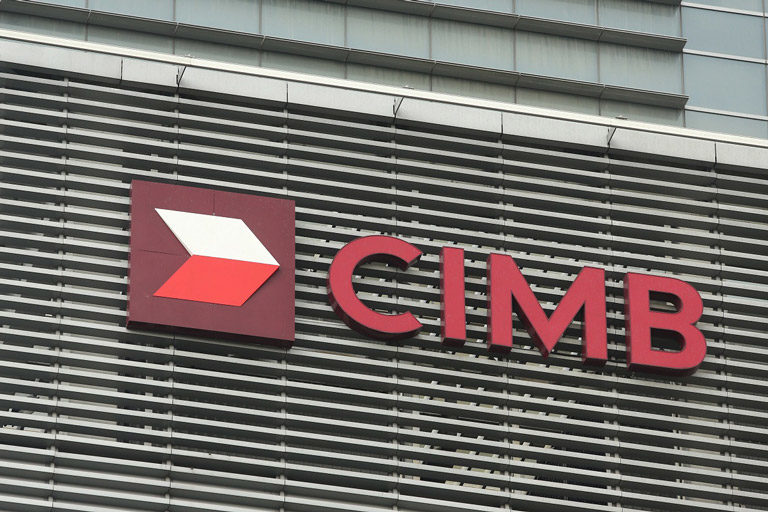 Over the past couple of years, CIMB — Malaysia’s second largest bank — has made considerable effort to revamp itself as a regional sustainability champion. Fortunately for CIMB, there aren’t too many contestants vying for the title.

In 2018, it was the only founding signatory from Southeast Asia to the Principles for Responsible Banking (PRB) that signify commitment to Sustainable Development Goals (SDG). Last year, CIMB published its first comprehensive Sustainability Roadmap to 2023 and held the inaugural Cooler Earth Sustainability Summit. In January 2020, it announced an allocation of MYR3 billion (USD700 million) for corporate sustainability-linked loans.

Still, these initiatives appear misplaced and inadequate in the absence of clear financing policies for forest-risk sectors. While an emphasis on sustainable finance does come through, the bank’s approach is too restrained to yield significant positive changes.

In a 2018 policy assessment study by Forest & Finance, CIMB, along with Maybank and RHB Bank of Malaysia, scored zero points due to their non-commitment to international standards specific to forest-risk commodities. None of the Malaysian banks are members of the Roundtable on Sustainable Palm Oil (RSPO) either.

The following year, CIMB rolled out a major revamp of its sustainability profile. But rather than responding to the criticism by adopting a full range of explicit ESG requirements for forest-risk companies — following existing checklists such as one developed by the Zoological Society of London — the bank tried to fill the gaps by strewing reports with voguish buzzwords on sustainability.

For one, as part of its sustainable financing policy, CIMB has introduced Enhanced Sustainability Due Diligence that is prescribed for clients engaged in palm oil and forestry. However, the purported financing guides have not been disclosed anywhere.

The promise of engagement holds little practical value without exclusionary criteria. Neither does it preclude recurrent infractions from being treated as separate client cases.

This means that, despite massive exposure to forest-risk sectors — eight plantation operators that the group has previously lent to manage almost 2 million ha of land in aggregate, and each has had to deal with issues ranging from deforestation to peat development to community rights — CIMB, among other Malaysian banks, willfully overlooks its impact on SDG 15 ‘Life on Land’ through financing activities. Local communities who bear the brunt of impaired land use and environment are thus effectively dismissed as stakeholders in materiality assessments.

Instead, CIMB expends pages covering changes to its direct operations — small feats like green printing practices and a new set of standards for third-party vendors. Ironically, the bank sounds more concerned about eliminating deforestation within its own supply chain (than in that of forest-risk companies it provides financial services to): vendors have been given a stern warning against engaging in “illegal logging or uncontrolled [emphasis added] use of fire for clearing forest lands, destruction of natural carbon sinks, habitat and ecosystems”.

In response to this specifically: firstly, CIMB would do well to learn that any use of fire to clear land — including the persisting practice of slash-and-burn among smallholders — is by definition uncontrollable and therefore illegal under most jurisdictions. Secondly, vendors constitute a tiny part (<0.1%) of the bank’s business. Last year, the group spent MYR945 million (USD223 million) on supplies, of which only 40% were expected to satisfy the bank’s new green policies; meanwhile, total loans issued by CIMB amounted to MYR369 billion (USD87 billion).

At this point, one environmental theme that CIMB seems more keen on funding is renewable energy. In October 2019, during its own Cooler Earth Sustainability Summit, it unveiled a renewable energy-based financing program worth MYR100 million (USD24 million) targeted at small and medium-sized enterprises (SME). Although the allocation itself was rather paltry (seeing that it was part of the larger MYR15 billion SME fund for 2019-2020), it is an indication nonetheless of the bank’s discernible priority areas in sustainability. What the bank does not realize, or more likely does not deign to acknowledge, is the fact that sustainably managed palm oil and forestry are as vital to a healthy climate on the planet as clean energy.

From CIMB’s perspective, it is not difficult to appreciate why the bank is reluctant to draw attention to palm oil and other forest-related sectors. The group is government-linked, and the Malaysian government is a fierce protector of the palm oil industry, one of the country’s leading export commodities, especially in the face of the European Union’s problem with the use of palm oil in biofuels. Recognizing palm oil as a material risk and covering this focus in any substantial manner would be equivalent to admitting to systemic faults in the industry — something that the government would rather blot out than discuss in the open.

This, of course, is anything but an excuse for CIMB, particularly given its financing of palm oil (and other forestry businesses) in Indonesia, the world’s largest producer of the controversial commodity. The Indonesian government has less leeway in hiding the issues, not in the least because of massive forest fires the world is witness to on an annual basis. Although some measures are being taken, their execution is execrable due to rampant corruption at multiple governance levels. In this situation, banks — as entities liable for keeping forest-risk businesses afloat — have a definite role to play and responsibility to fulfill.

It is important that CIMB follows internationally set standards in its assessment of agricultural and forestry businesses. As such, it should require that every borrower imposes strict No Deforestation, No Peatland, No Exploitation (NDPE) policies in all development areas at group level (and across their supply chains, investments and partnerships) and implement the same through the High Carbon Stock Approach (HCSA).

In turn, the correct implementation of this methodology can only be affirmed if full information is regularly disclosed. Hence, it is imperative that CIMB requires proof of the practical application of public commitments — for example, through the clients’ publishing of maps showing their forest footprint and conducting of participatory mapping involving local communities.

Any failure to comply ought to prompt an immediate exclusion and definancing. On the other hand, the bank can encourage good practices among borrowers by offering preferential credit conditions to companies with a clean record and progressive practices that are in line with independent global standards.

Even with the new sustainability blueprint published in 2019, CIMB still fails to satisfy the essential criteria that socially responsible forest-risk financiers must abide by: 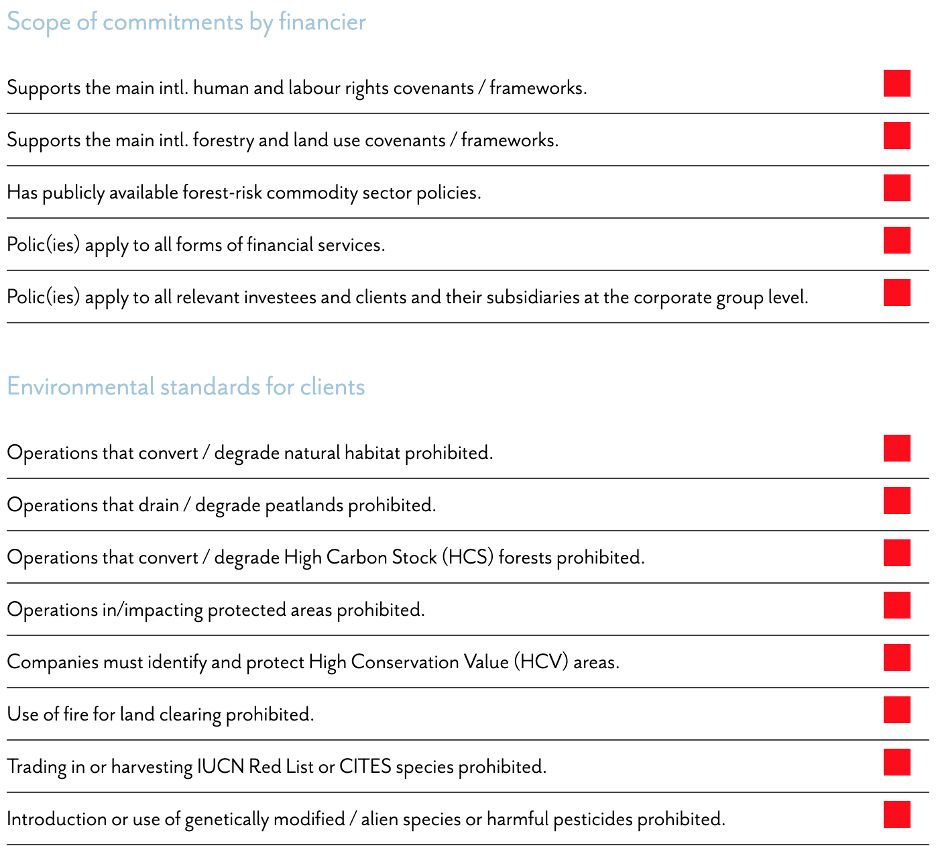 In its latest sustainability publication, CIMB shares that in the mid- to long-term it hopes “to influence, shape and forward the sustainability agenda in ASEAN [the Association of Southeast Asian Nations]”. However, the bank’s initiatives in their present form, although a definite improvement, lack punch.

To avoid turning into a paper tiger and considering the large footprint it possesses in forestry and forest-linked agriculture, CIMB must recognize the all-encompassing impact of its financing activities on land, people and the environment and not be shortsighted in its sustainability strategy.

CIMB needs to enact more effectual, globally standardized policies and urgently enforce them across its forest-risk sector portfolio — in Malaysia and even more so in Indonesia. It is the duty of banks to do the right thing by definancing the destruction of rainforests, and it is our collective duty as consumers (of both bank and forest-linked products) to call any bad actors out.

Editor’s note September 6, 2020: CIMB issued a response to this commentary. The response concludes: “CIMB is committed to sustainability and will continue to roll-out stronger, more robust policies in a phased approach, while remaining action-focused and inclusive.”