For the Mediterranean, the Suez is a wormhole bringing in alien invaders

BEIRUT, Lebanon — A hidden invasion is taking place beneath the waves of the Mediterranean Sea. In recent years, scientists have recorded more than 700 alien species in Mediterranean waters, most of them entering through the Suez Canal in Egypt. More than 600 invasive species, many of them destructive, have established populations in their new environment, according to a 2019 report from the network of Mediterranean Experts on Climate and Environmental Change (MedECC). Meanwhile, Mediterranean nations, including Egypt, have done nothing to slow the influx, according to researchers.

With its construction in 1869, the Suez Canal shaved almost 10,000 kilometers (6,200 miles) and 24 days off the old trading routes between Asia and Europe. Connecting the Indo-Pacific to the Mediterranean, it allows for the quick passage of manufactured goods and grain south from Europe to the Arabian Gulf, and oil northwest from the Gulf to western Europe. But oil is far from the only thing that is now coming north.

The introduction and expansion of invasive species in the Mediterranean is “increasing at an alarming rate,” says Michel Bariche as he gestures toward a large cabinet cluttered with glass jars filled with formaldehyde and fish.

Bariche, a professor of marine biology at the American University of Beirut (AUB), is one of the world’s foremost experts on Lessepsians, a term used to describe species native to the Indo-Pacific that invade the Mediterranean through the Suez.

Bariche says what’s happening is a normal evolutionary process, but in hyperdrive: usually it would take around 200,000 years for the same impact that has occurred in the Mediterranean in less than 100 years.

“It’s unprecedented! Like being able to watch hundreds of thousands of years’ worth of evolution live!” he exclaims.

Despite this, Egypt is not actively controlling the movement of species across the canal, imperilling the ecosystems of the Mediterranean.

“Any prevention measures to reduce new Lessepsian immigrants have to be implemented by Egypt, as Egypt solely manages the Canal,” says Stelios Katsanevakis, a professor of marine ecology at the University of the Aegean in Greece.

Invasion speeding up, taking over

Scientists say the negative impacts of the Lessepsian invasion are currently most significant in the Levantine Basin, an area of the far eastern Mediterranean bordered by Egypt, Palestine, Israel, Lebanon, Syria and Turkey.

“Levantine Marine Protected Areas [MPAs] are already dominated by invasive populations,” says marine biologist Bella Galil, who has been researching marine species in the Levantine Basin for over 30 years and works with Tel Aviv University’s Steinhardt Museum of Natural History. “These species prove to be impervious to efforts of containment and their impacts are likely irreversible.”

She describes the current state of Levantine MPAs as “epicenters for invasion,” highlighting how the seabed communities she studied in the 1970s simply don’t exist anymore, having been replaced by invasive species via the Suez Canal.

But even as invasive species have made a home in the Levantine Basin, they are now on the move to new areas.

“With warming of the Mediterranean, the species that were restricted here [in the east] are moving and now they are in Italy, Greece, Tunisia, and some of them [have] reached France,” Bariche says.

As they move, so too does the worry that they will negatively impact European fisheries.

Two factors appear to be speeding up the arrival and spread of species: climate change, and expansion of the Suez Canal. Opened in 2015, a new 35-km (22-mi) channel and 37-km (23-mi) enlargement of existing channels increased the Suez Canal by 500 million cubic meters (132 billion gallons). This expansion and an increase in shipping capacity, from 49 to 97 ships daily, are exacerbating the invasion, scientists say.

Worries that the project might be detrimental to Mediterranean ecology prompted experts to call on the Suez Canal Authority to publish an environmental impact assessment. They never did, despite Egypt’s ratification of the 1993 Convention on Biological Diversity. The legally binding treaty specifically addresses transboundary invasions, explicitly requiring “the introduction of environmental impact assessment procedures where there is the likelihood of environmental damage from development.”

Katsanevakis says the impacts aren’t just on fisheries, but also on recreation, health, and the regional economy. For example, massive swarms of the venomous and invasive nomad jellyfish (Rhopilema nomadica) disrupt coastal trawling and purse-seine fishing as they clog nets and prevent fishers from sorting their catch. The swarms, which can be 100 km (60 mi) across, also hurt recreation and tourism: swimmers can’t enter the water at these times due to the jellyfish’s painful sting.

The nomad jellyfish is one of 10 venomous and poisonous invasive species identified by researchers.

“Forget about snorkelling — we may come to a situation when entering the sea at all will be forbidden at certain periods,” Galil says.

Nomad jellies eat everything they can reach, including the larvae of shrimps, lobster and fish. Bariche says this is likely to impact fisheries in the long term; because there is a time lag for larvae to grow into commercially sought mature fish — around three to four years — the problem won’t become evident immediately.

The nomad jellyfish isn’t the only alien disrupter. Fishers across the eastern Mediterranean complain of extensive damage to their nets and lines caused by the powerful teeth of the silver-cheeked toadfish (Lagocephalus sceleratus), according to the regional office of the Food and Agriculture Organization of the United Nations (FAO). This Lessepsian species from the family of puffer fishes also carries tetrodotoxin, a potent chemical more toxic than cyanide, which can cause death as soon as 17 minutes after ingestion, according to an article published in Undersea and Hyperbaric Medicine in 1999. Catching and selling it has been banned in some countries.

Scientists also point to the dusky and marbled spinefoot rabbitfish (Siganus luridus and Siganus rivulatus) as two of the most damaging Lessepsian species.

“They are so competitive for food they eat everything. Like locusts,” Bariche says, pointing to pictures of two small, nondescript, brownish fish in a reference book on his desk.

“[They] have caused, through overgrazing, the gradual transformation of the eastern Mediterranean shallow reef habitats,” Katsanevakis says. “From ones dominated by lush and diverse brown algal forests — essential habitat for many commercial species — to ones dominated by bare rock or algal turf.”

These two species are single-finnedly removing the entire flora of the eastern Mediterranean, and Bariche worries this could cause a bottom-up trophic cascade: when an entire ecosystem is impacted by removal of a primary producer species, in this case seaweed.

“[It’s] affecting all kinds of other organisms linked to these seaweeds. Including those who … use it as nurseries, as habitat,” Bariche says. “It’s very hard to quantify something that important.”

Bariche has become the eyes and ears of the influx.

“While I’m sitting here I have two or three thousand [people] who are getting me information,” he says from his desk at AUB. “A fisherman has been fishing for 30 years, and then he gets a fish he doesn’t know … And then he contacts me.”

Despite the impacts of some particularly disruptive species, experts don’t believe all immigrants are problematic. Many Lessepsian species are edible and have come to make up a significant proportion of commercial catches.

“The balance between positive and negative impacts is difficult to assess and in many regions some Lessepsian species are considered a boon for fisheries,” Katsanevakis says.

Even the spinefoot rabbitfish species now have a high market value in many eastern Mediterranean countries and are found in the majority of fish markets.

Some Lessepsian species may have positive impacts on the marine environment as well as the economy, says Katsanevakis. They can act as new food sources for endemic fish, as well as the other way around. Some create novel habitats. The reefs, macroalgal beds, and seagrass beds built by invasive species can support rich biodiversity.

“Especially in land-locked basins affected by climate change, such as the eastern Mediterranean, temperature-sensitive native species are declining or going locally extinct,” Katsanevakis says. Species that evolved in warmer climates, like Lessepsian invaders, may be able to fill some lost ecological roles.

But Galil cautions that the commercial value of introduced and invasive species may be “an economic success at a great and irreversible environmental cost.”

While scientists have been monitoring the invasion, governments have done little to stop or even mitigate it.

The Suez Canal has been around for more than 150 years, but the impacts of the invasion only began to be felt more recently. Scientists believe fewer species used to make it through the canal due to a salty dead zone that has since disappeared naturally.

Given this, Galil recommends “[r]eintroducing the salinity barrier that used to be present in the Canal’s early days, and that we know was efficacious in stopping at least some of the invaders.”

Egypt is currently constructing large-scale desalination plants in the area. Galil suggests their high-salinity effluent could be used to increase salt levels, effectively creating a new barrier. She also references three pairs of locks on the Panama Canal as an example of effective management.

Galil also calls for neighboring European countries to “face the truth” and engage more with the issue to avoid dire future consequences as species continue to spread through the Suez Canal.

Egypt is a signatory to the 1976 Barcelona Convention, for the protection of the marine environment and coastal region of the Mediterranean, amended in 1995 to include protection of marine biodiversity. The country pledged to protect marine and coastal habitats and threatened species and monitor the spread of invasive species.

“Above all we should acknowledge that policy, legislation and regulatory actions are late, reactive, and largely ineffective,” Galil says, adding that Egypt must step up its management of the canal.

Those with the most knowledge of the region are watching it evolve in real time. Sea lovers are facing a more personal truth: that the beauty and thrill of a snorkel adventure in many once thriving places is simply not there anymore.

“As a teenager, I used to snorkel along the coastline of Crete and enjoy the rich and flourishing sea-life. Now the same areas are like deserts,” Katsanevakis says, adding it’s “quite depressing.” 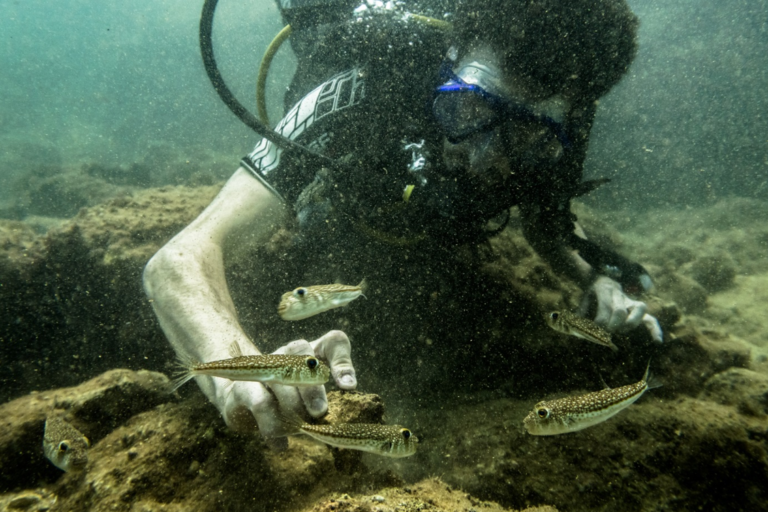 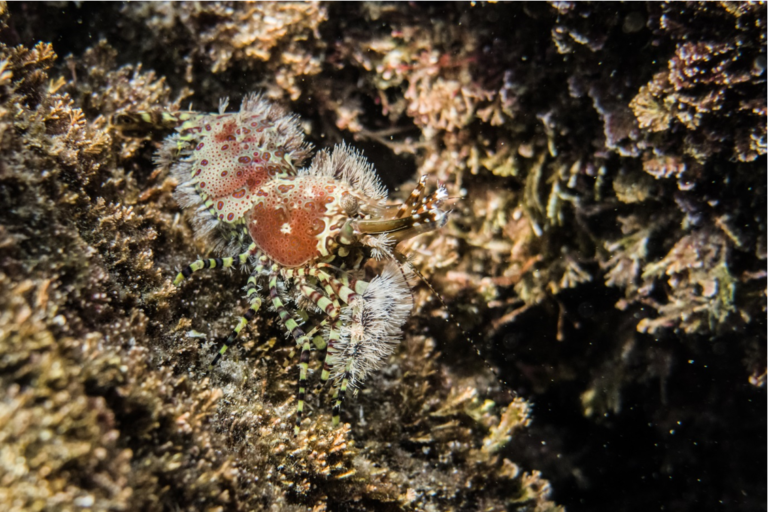 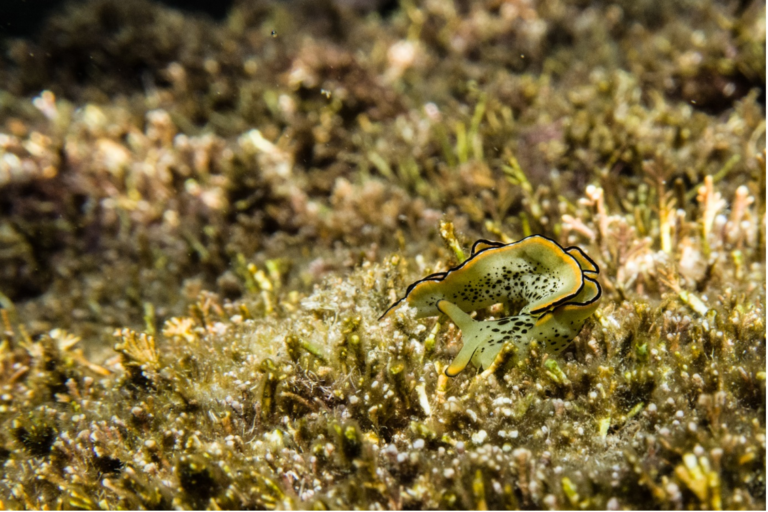 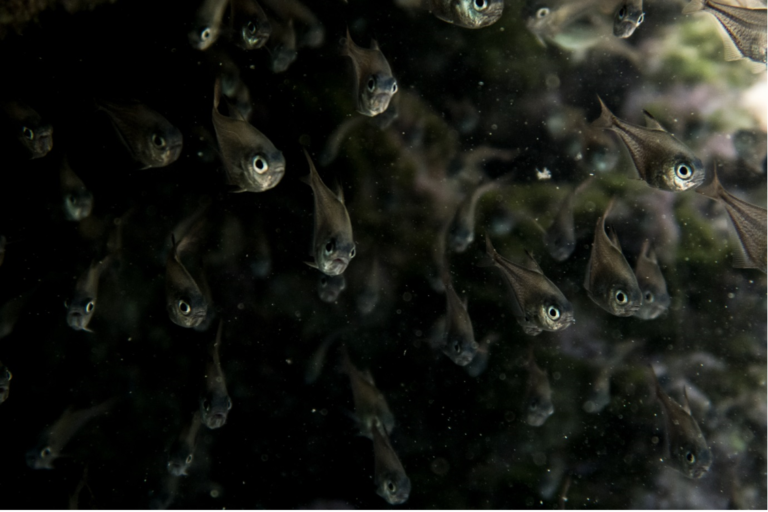 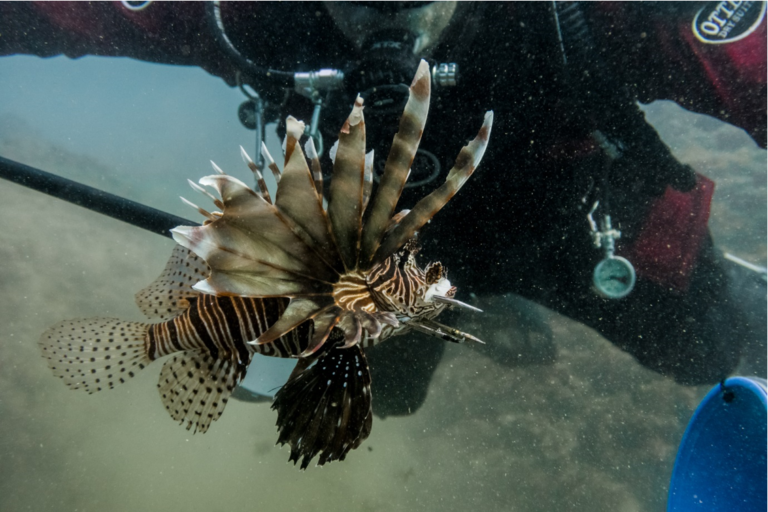 Banner image: The first officially recorded lionfish, an invasive species to the Mediterranean Sea from the Indo-Pacific, discovered in Lebanese waters in 2012. The specimen was found, preserved and reported by Michel Bariche and is now part of his extensive collection of alien species at the American University of Beirut. Image by Elizabeth Fitt.