In race for a sustainable alternative to plastic, Indonesia bets on seaweed

Edible cups made from seaweed. Shopping bags from cassava starch. Food containers from sugarcane fiber. These are some of the bioplastic alternatives being tried out in Indonesia, the world’s No. 2 producer of seaweed. Words by Johan Augustin; Images by Jonas Gratzer. by Johan Augustin on 25 March 2020

BALI, Indonesia — It’s just after sunrise here in Bali, and a group of locals are preparing to sail their wooden boats out to a bay off Nusa Lembongan, a small island southeast of the tourism hotspot.

They’re neither fishermen nor tour guides. They’re farmers, cultivating a watery crop that promises to be part of the solution to the increasingly urgent problem of marine plastic waste that’s become woven into the Bali experience for the millions of people who visit the island each year.

“Algae cover a very broad area,” says Rama. “I am optimistic. We can develop ecotourism and use the algae in many ways — for example in our spa, where we scrub tourists with seaweed.”

Rama, 17, is part of a new generation of Balinese hoping to carry on an age-old tradition of harvesting algae, or seaweed. He looks out at the calm and still waters of Lembongan Bay. The inlet is protected by reefs that absorb the waves some 100 meters (330 feet) off the shore. The water temperature hovers at 28° Celsius (82° Fahrenheit), salinity is at 30%, and the current flows in just the right direction. It’s the perfect place for what grows beneath the surface: Eucheuma cottonii, also known as macroalgae or red seaweed. (Despite its name, it comes in shades of red, brown and green.) The seaweed grows in straight lines, attached to ropes stretched between iron rods that run over the sandy bottom.

Rama’s father, Wayan Suarbawa, is one of Nusa Lembongan’s five seaweed farmers — the last remnants of an industry that employed most of the island’s 5,000 inhabitants during its heyday in the 1980s. The big blow came in 2014-2016, when the farms were hit by a bacterial infestation that hardened and whitened the seaweed. The disease was triggered by a rise in water temperature and changes in salinity and light conditions — the hallmarks of a changing climate. With their livelihoods devastated, most of the farmers sought out jobs in the tourism industry.

Indonesia was the world leader in the production of E. cottonii before 2014, churning out more than 8 million tons a year. Today it’s No. 2, after China, but still supplies 38% of the global seaweed market.

But the tide is turning once again in Nusa Lembongan. The local government wants to employ an additional 100 seaweed farmers in Lembongan Bay through a program that hands out 0.8 hectares (2 acres) per farmer to grow seaweed. The waters around Nusa Lembongan could potentially host up to 500 seaweed farmers. Prices are up, along with prospects for Eucheuma seaweed, which is used to make carrageenan, a thickener and stabilizer used in foods, cosmetics and industrial products. In countries like Indonesia and the Philippines, the macroalgae is also consumed as food.

Suarbawa says he makes about 15 million rupiah (about $1,000) a month — six times the minimum wage in Bali — just from selling seaweed to visitors coming from the capital, Jakarta. Suarbawa is also involved in plans for an ecotourism initiative in Nusa Lembongan that will bring tourists to snorkel among the algae.

A seaweed farmer harvests his crop in Lembongan Bay, Indonesia. Image by Jonas Gratzer for Mongabay.

But the threat of climate change and the potential for another bacterial outbreak still linger over Lembongan Bay. This part of Bali has also lost a number of seaweed farms to tourism developments, clearing of wetlands, and pollution. To ensure a more resilient seaweed-farming industry this time around, the farmers will have to develop more resistant varieties of algae, experts say.

“Climate change and the accompanying El Niño will significantly destroy seaweed farming in Indonesia,” says Ketut Sudiarta, a scientist in the fisheries department at Bali’s Warmadewa University. “This has happened now. Almost all of Indonesia has failed and most of [the farms] have been abandoned by farmers.”

But if the industry succeeds, it could become a weapon in the fight against climate change. The algae grow quickly — 30 to 60 times faster than land-based plants — and absorb carbon dioxide from the water and atmosphere. If cultivated at scale, that makes it an important carbon sink, which can then be harvested and used as a biofuel in place of fossil fuels. 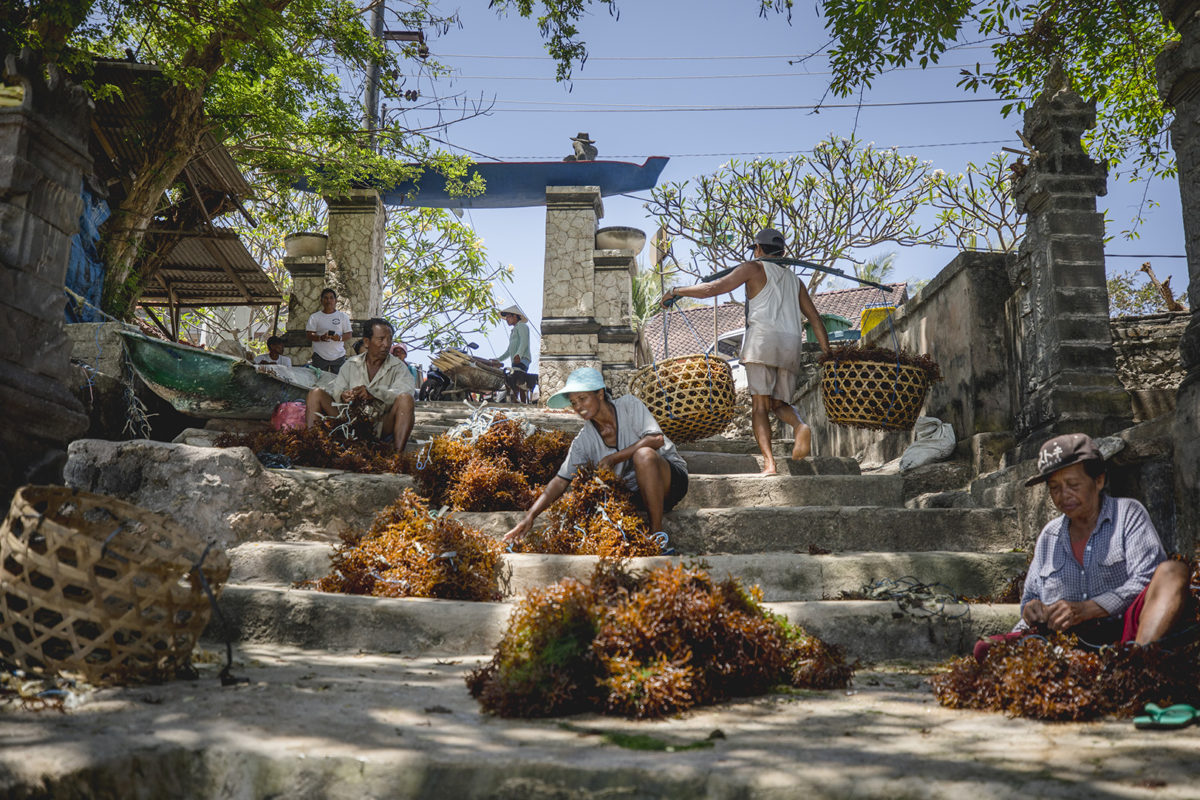 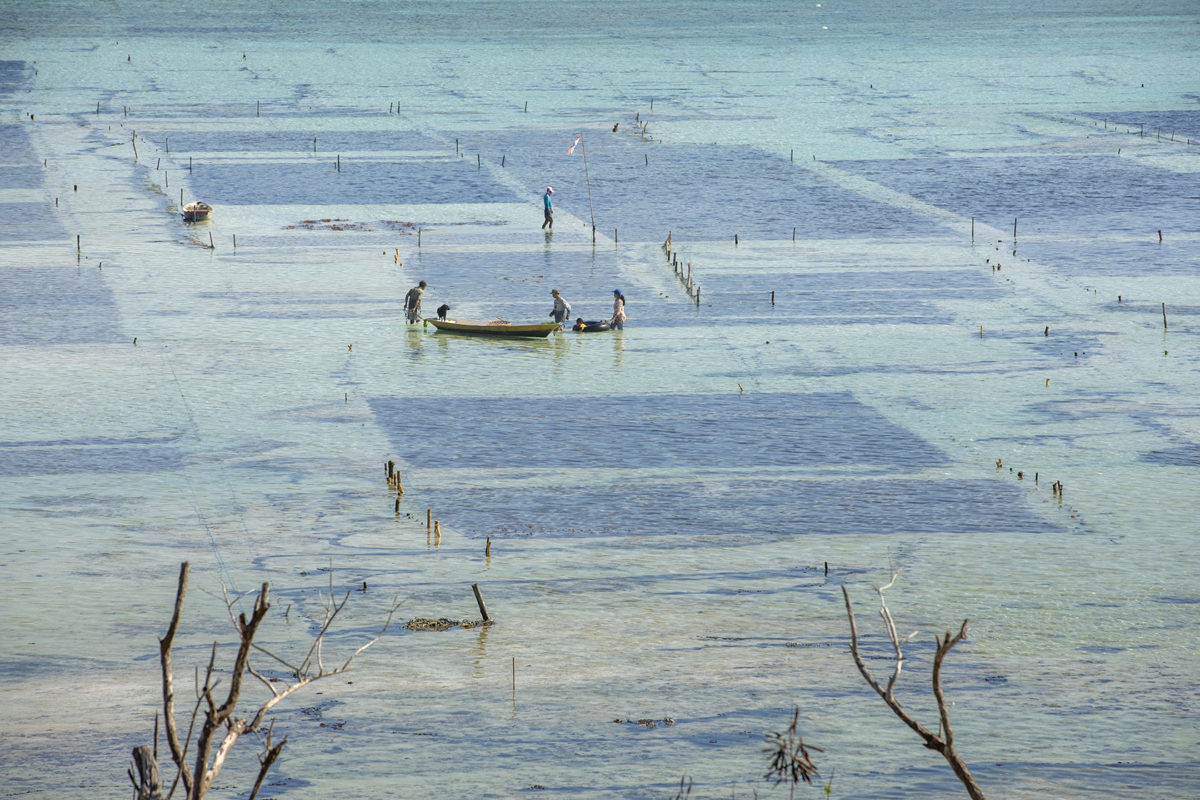 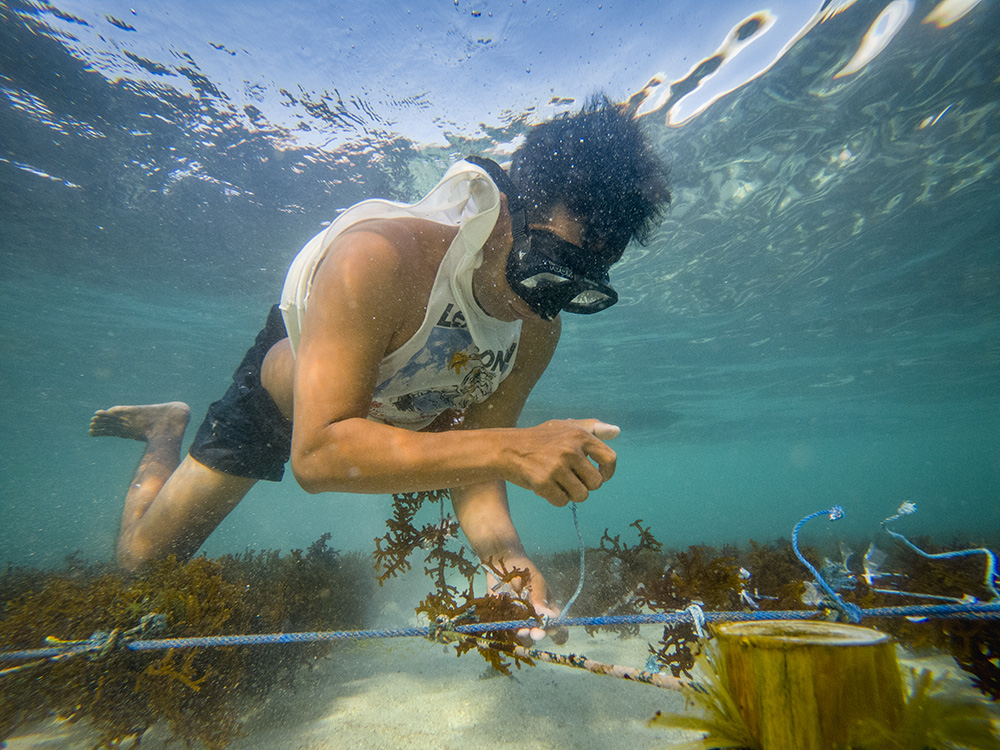 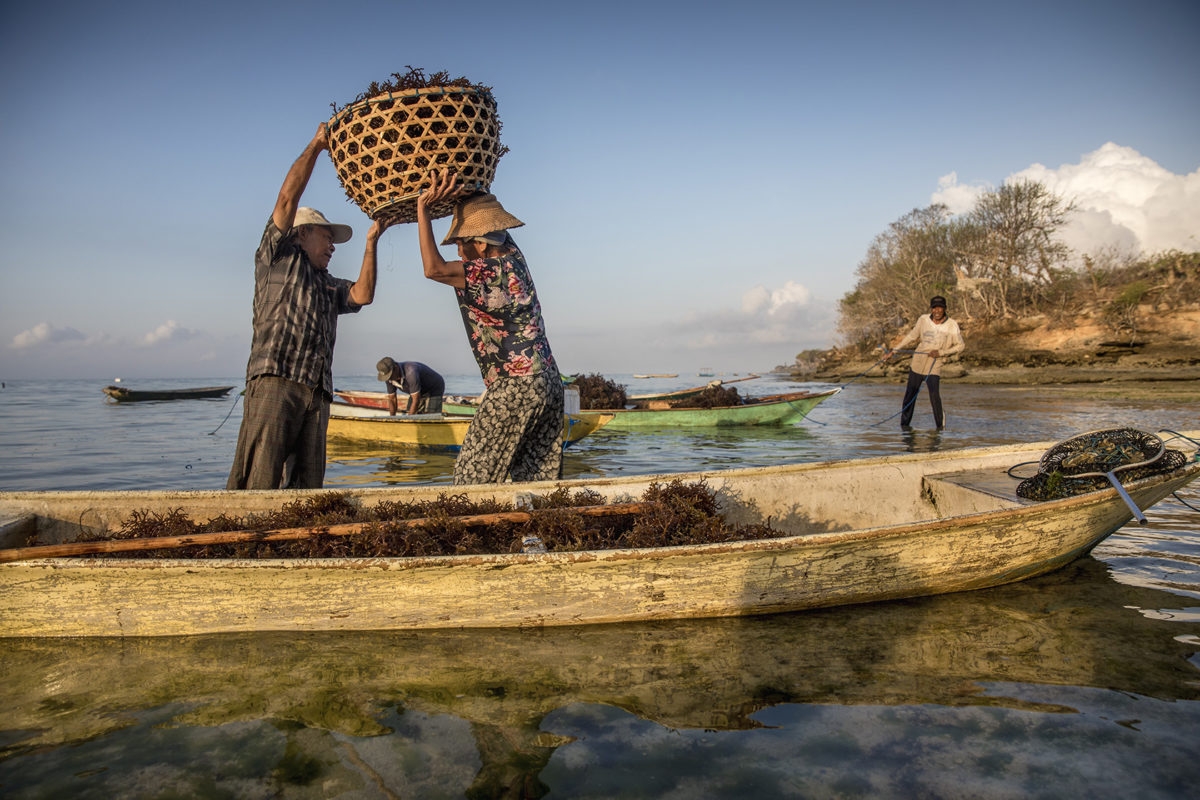 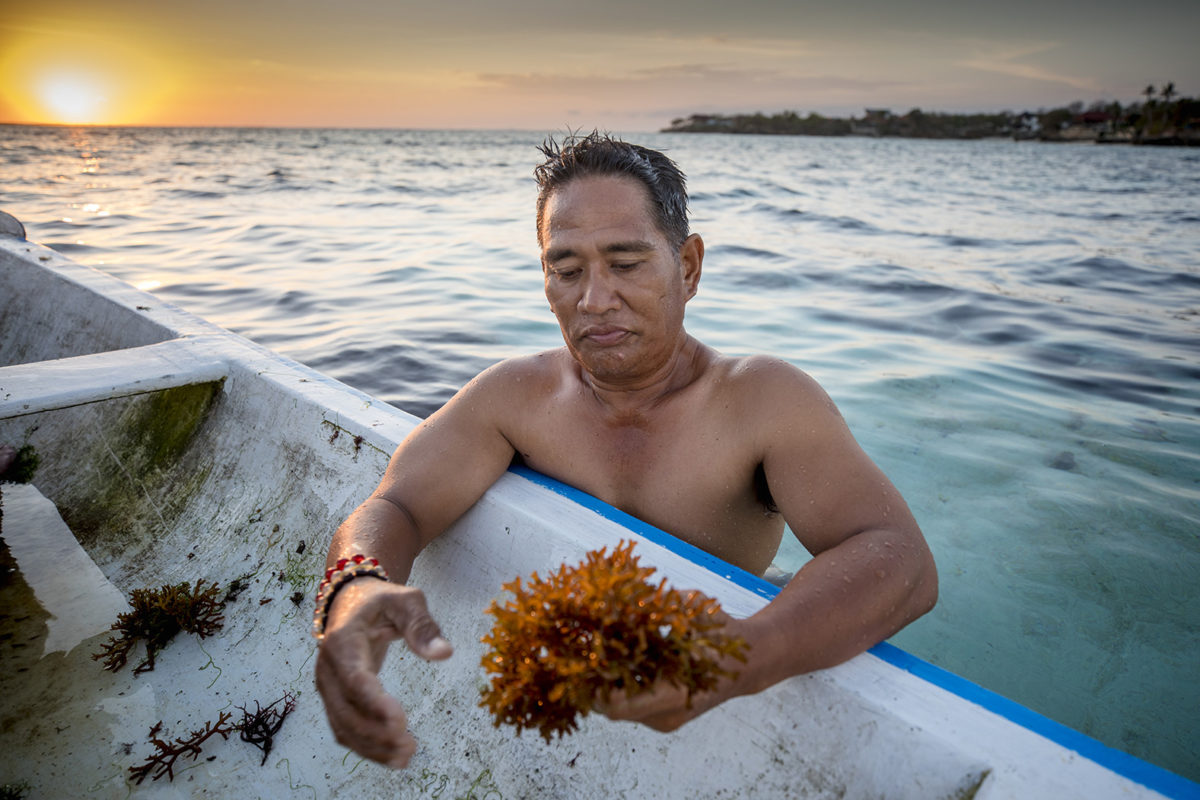 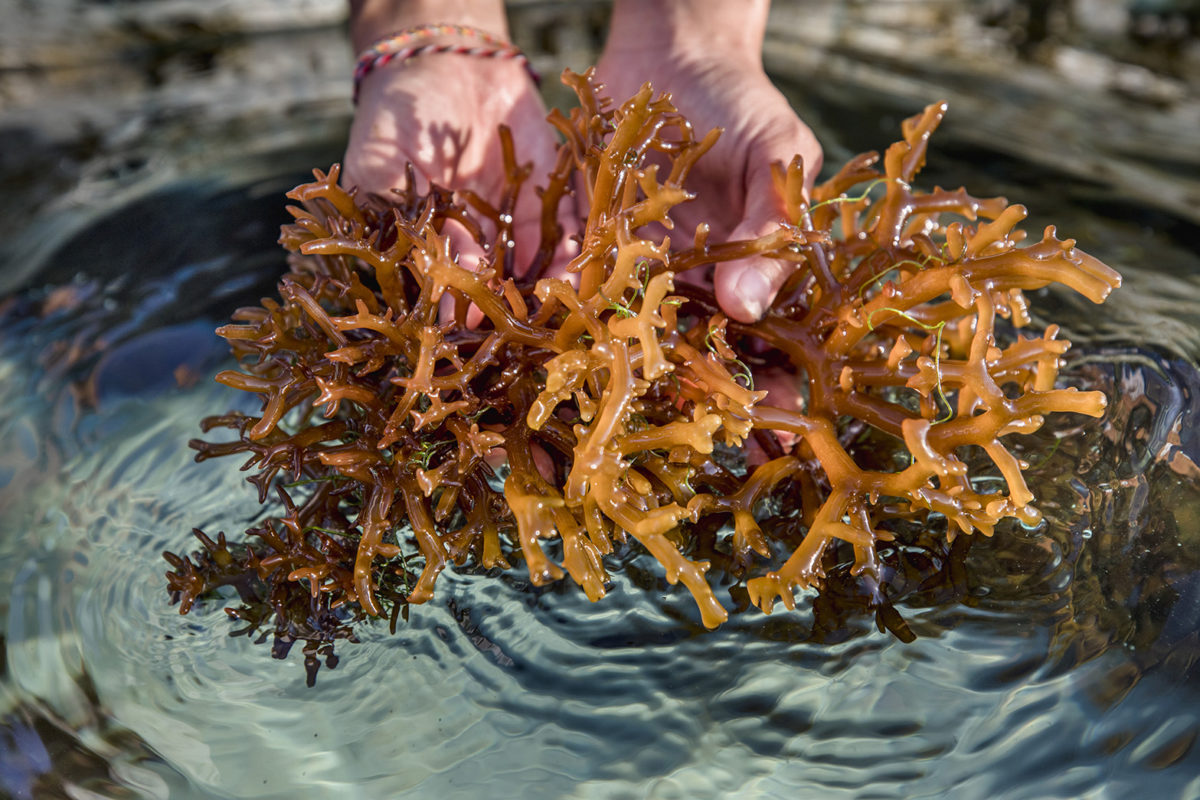 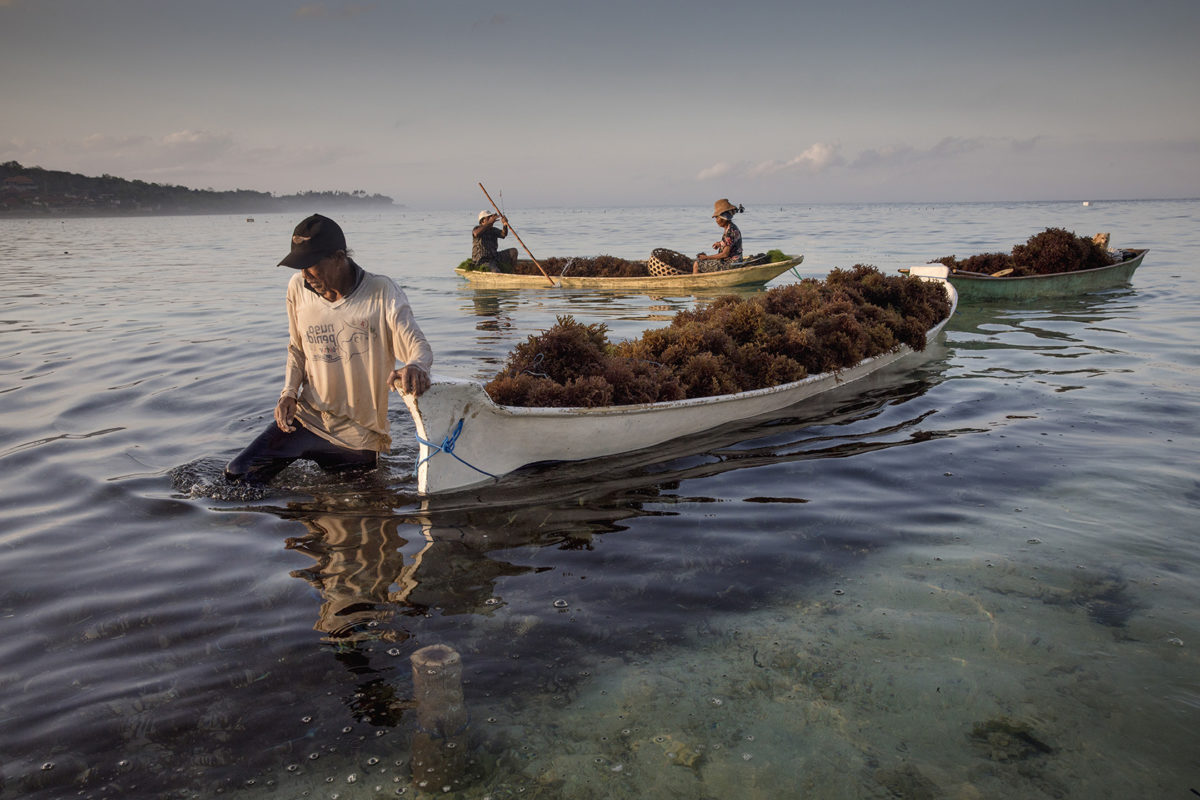 It could also be the solution to that other environmental bane in Bali: plastic waste, of which Indonesia is the world’s second-biggest contributor, after China. Seaweed can be processed to make food containers — biodegradable, edible even — that could replace the conventional single-use plastic containers that account for much of the trash fouling Bali’s beaches and seas.

According to Sudiarta, “it’s very possible, especially for the big brands,” to make the switch from plastic containers to seaweed-based packaging. For now, though, a host of small companies are pioneering that effort.

David Christian started his company, Evoware, in 2016, in response to the plastic waste crisis in his hometown of Jakarta. He makes edible seaweed cups under the Ello Jello brand that come in various colors and flavors, from orange to green tea. The company also produces edible food wrapping and single-use sachets, typically used for instant coffee or food condiments.

At a restaurant in central Jakarta that serves ice cream in Evoware cups, Christian explains how his initiative is more than just a corporate venture.

“We want to support the farmers in making a living from a sustainable source,” he says, dressed in a T-shirt with the slogan “Seaweed over plastic.”

“Seaweed does not take up land, it doesn’t lead to deforestation, and no fertilizers are used,” he adds.

Christian is involved in a 4Rs campaign — reduce, reuse, recycle, replace — that aims to reach a million people with its sustainable goals. Evoware’s social involvement sees youths at orphanages in Jakarta, Bali and Malaysia produce and sell Ello Jello cups and keep the profit. Production is limited at present, about 500 per day, and testing is still going on. But orders have come from 900 companies in 52 countries, and Christian says full-scale industrial production of containers and cups should happen later this year.

“The demand for these products will only increase, and the cost of production will decrease,” he says, adding that reactions have been positive and that he welcomes other companies exploring similar solutions.

“We all have the same goal of beating the conventional plastics,” Christian says. “The market is enormous and we need many players, so why compete with one another?”

One such company is Avani Eco, based in Bali and producing shopping bags (printed with “I am not plastic”) from cassava fiber since 2014. It also makes drinking straws from paper and cornstarch, as well as food boxes from bagasse, the dry, fibrous residue from sugarcane processing. The company garnered widespread attention when co-founder Kevin Kumala dissolved one of his bags in lukewarm water and drank it, to emphasize that it was non-toxic and entirely biodegradable. 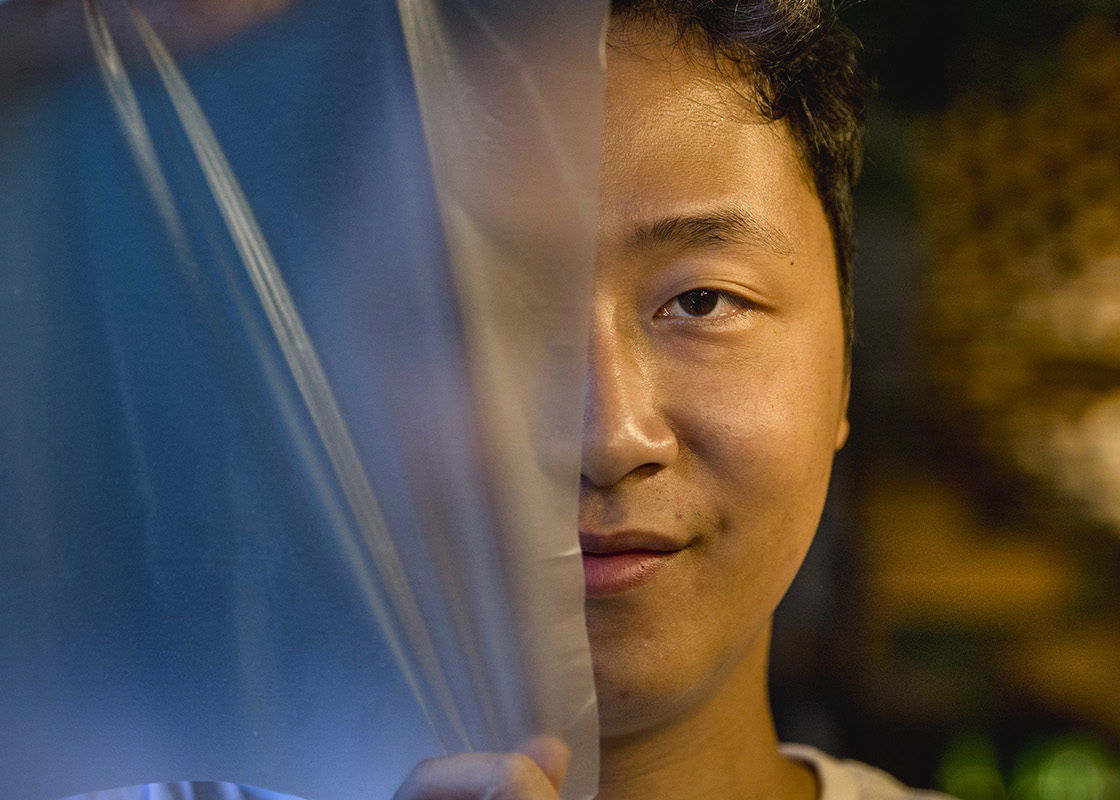 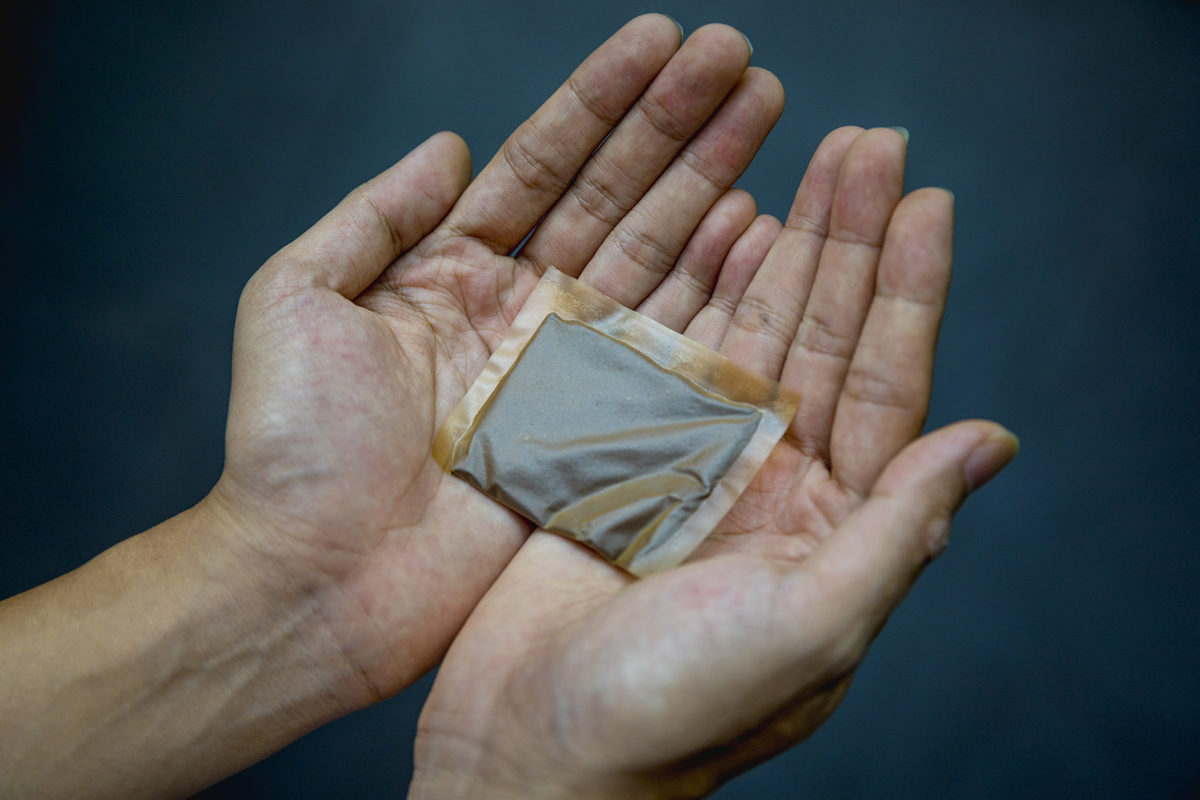 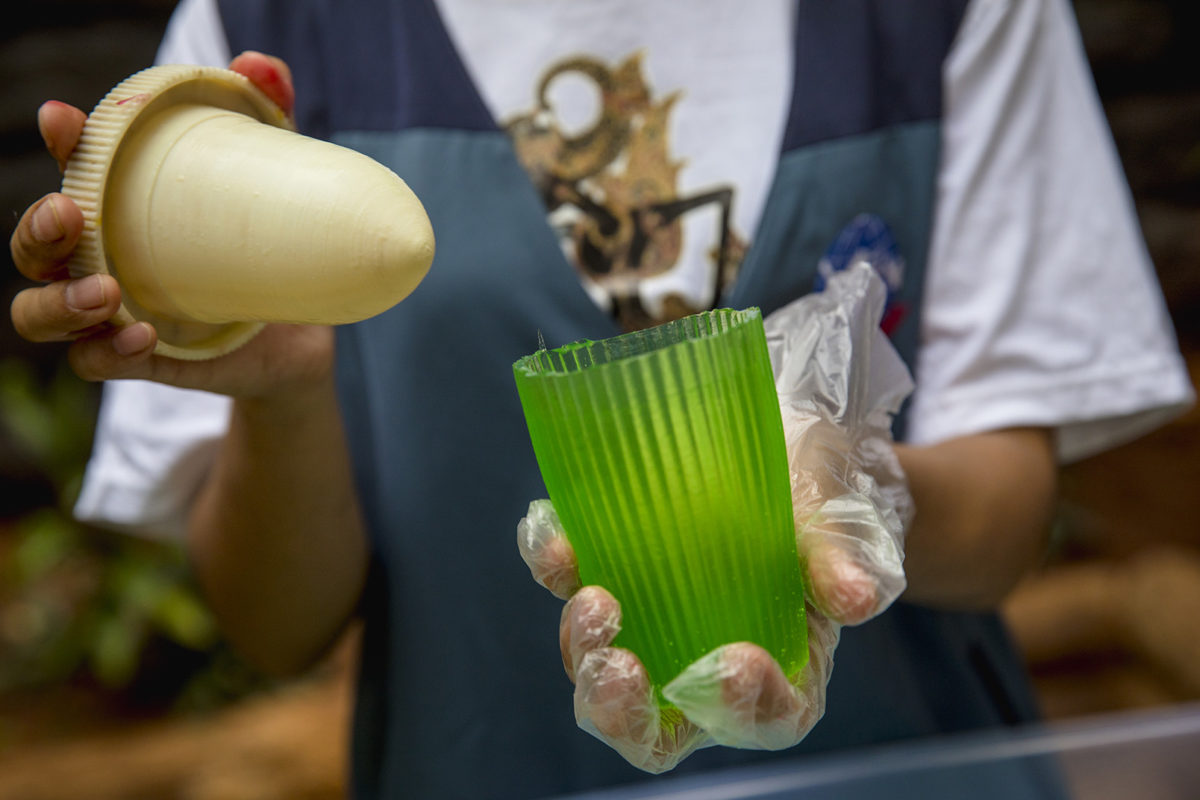 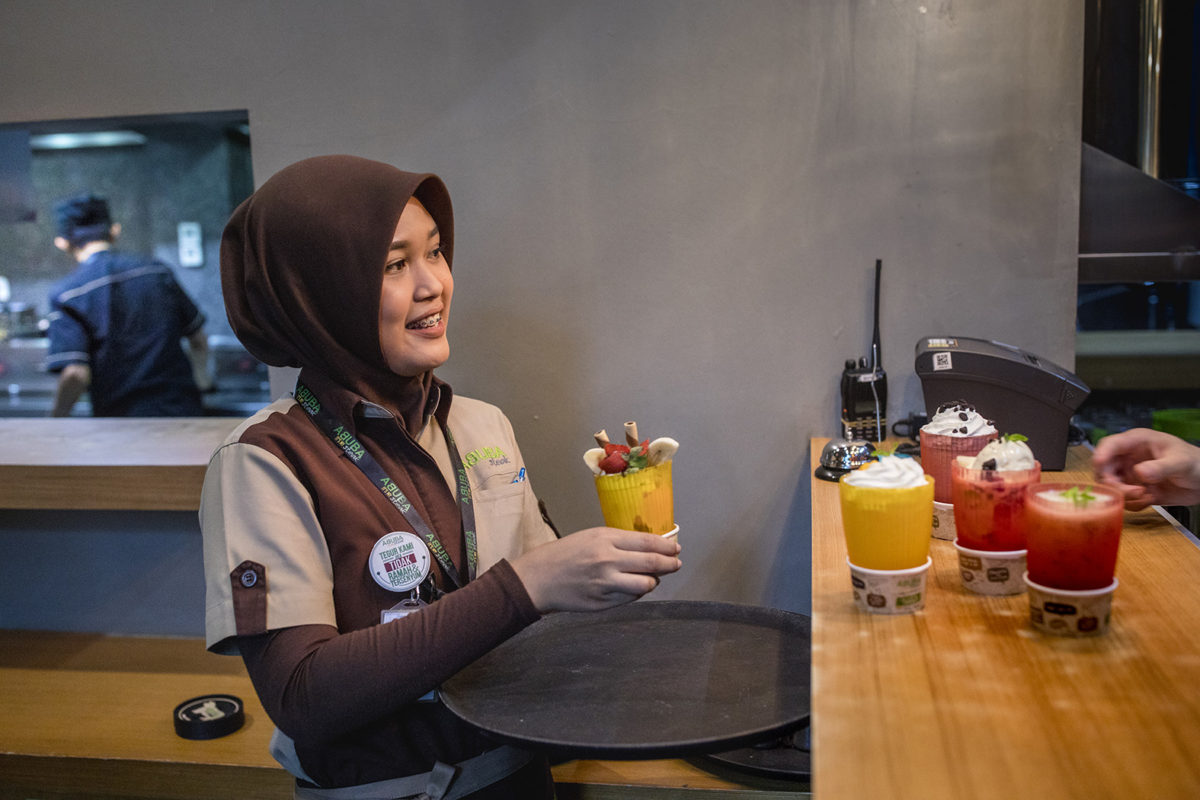 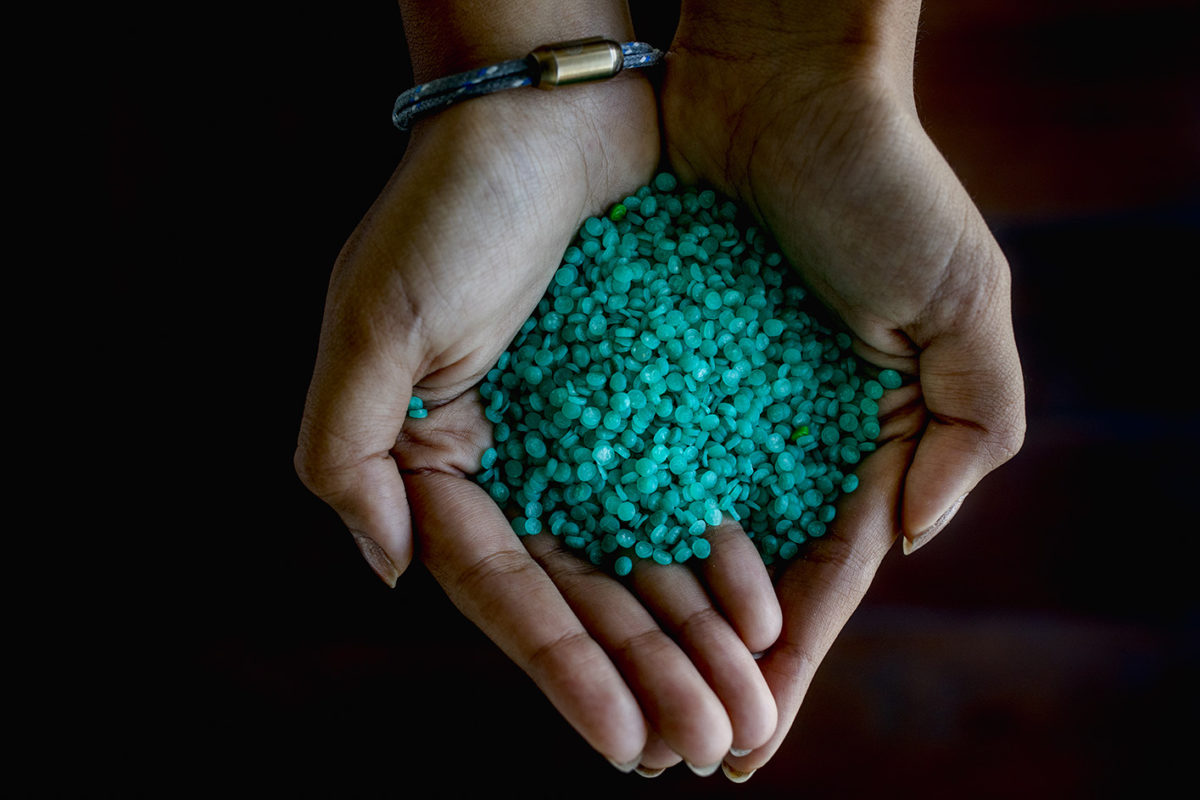 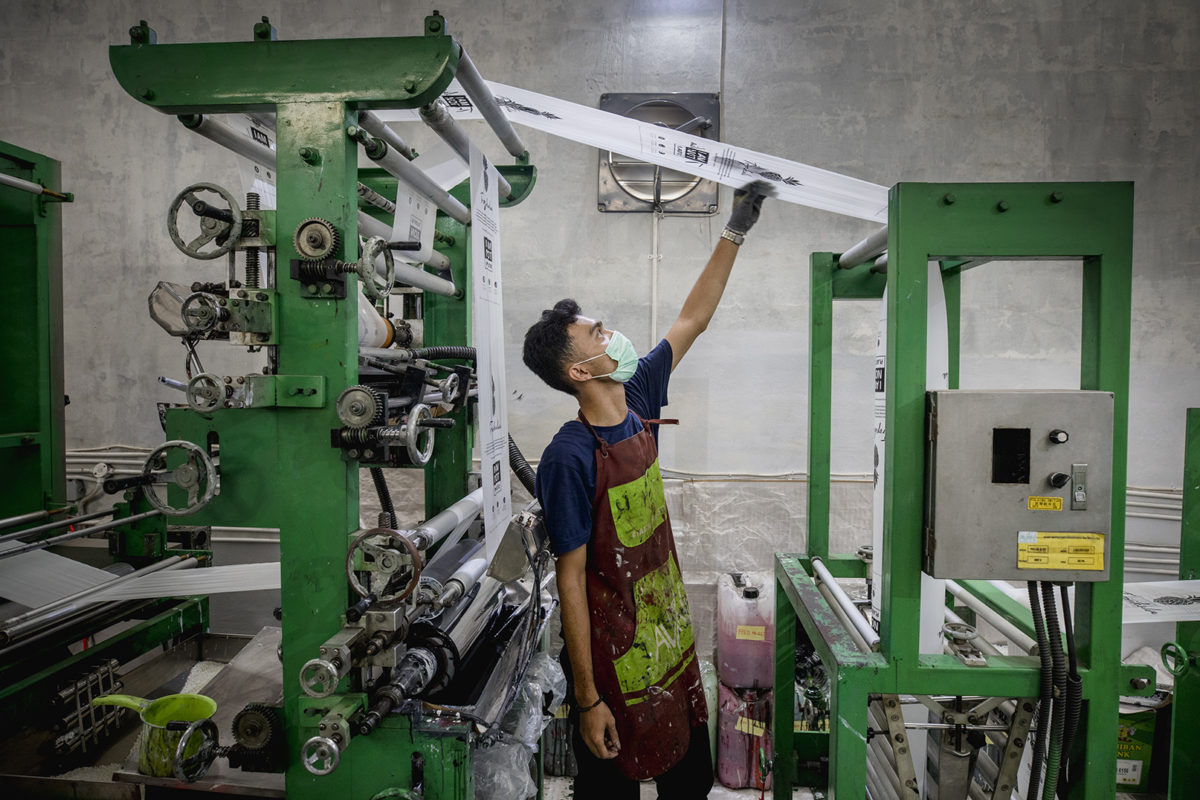 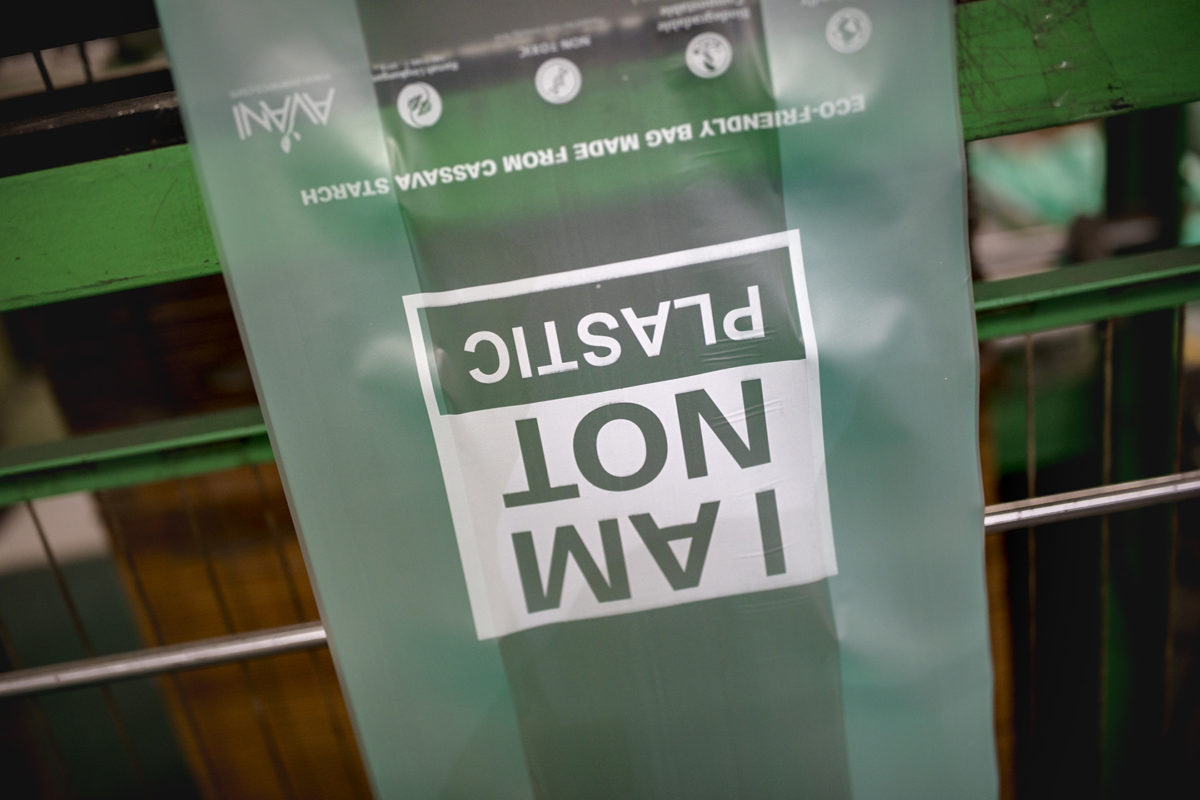 While new technological advances have blown the field of bioplastics wide open, seaweed holds the most promise due to its versatility and the sheer scale of current production. The global seaweed market was valued at more than $4 billion in 2017 and is estimated to pass $9 billion by 2024, about 90% of it E. cottonii. Food production is still the main destination for the crop, and expected to keep growing, but alternative uses are being explored. These include seaweed as biomass for fuel, as well as for use in fertilizers, animal feed, and wastewater treatment.

Back in Nusa Lembongan, seaweed is being put in service to the area’s predominant industry: tourism. Komang Astawa, 33, is one of the island’s three newly trained seaweed farmers, the recipient of a 2-acre patch in the bay with 400 lines of seaweed. He plans this year to start taking tourists on snorkeling trips on his seaweed farm.

“I want to show tourists how we grow the seaweed, and how we harvest it,” Astawa says. “Seaweed is a big business. There are many ways to make money in it.”