In Bali, young people lead the fight as a plastic plague threatens paradise

Bali has long grappled with plastic pollution both on land and in its seas. With the problem growing more acute, local organizations and youths are spearheading the fight against plastic waste. Words by Johan Augustin; Images by Jonas Gratzer. by Johan Augustin on 19 February 2020

BALI, Indonesia — Waves roll in over the black volcanic sand on Sogsogan, a beach in southern Bali. Further out, surfers prepare to master the swell. Bali has long been a tropical paradise destination, but the waves, long beaches, palm trees and party lifestyle associated with the island are overshadowed by an intruder disrupting the idyll.

Plastic bottles, single-use containers, and plastic straws are scattered across the beach.

“I paddle through waste when I’m on my board in the water, and on land there are piles of garbage,” says French tourist Lula Marie Seureolu, a regular visitor to Bali since she was a child.

Some days she goes to the beach just to join cleanup activities.

“There is plastic everywhere,” she says.

The problem peaks during the rainy season, between December and February, when rivers heaving with waste spew it out into estuaries and the ocean. Bali and other Indonesian islands lack sufficient waste disposal plants and collection systems, which means that half the generated trash ends up polluting the land, waterways and sea. Indonesia is the world’s second-largest ocean plastic polluter, after China.

‘We get nowhere by pointing fingers’

Although the outlook is dire, there have been some recent positive changes. Civil society groups and the private sector are on the front lines of the fight. A number of organizations hold daily beach cleanups. The effect is temporary, though, because the next tide will bring in more plastic trash. Any long-term solution will require greater involvement from the government, and that’s what local sisters Melati and Isabel Wijsen are trying to get.

Inspired by a lesson at school seven years ago, when they were 12 and 10, respectively, they started the organization Bye Bye Plastic Bags. It has since grown to become a global movement of predominantly adolescents, who not only want to prohibit plastic bags but have also started a number of other environmental projects.

Getting the government of Bali to take action required appealing to its bottom line: the island’s all-important tourism industry. Tourists drawn here in search of pristine seas and colorful fish were instead encountering schools of plastic trash — and uploading photos of filthy beaches to social media. The Wijsen sisters, together with a number of organizations, held discussions with the local government, leading to a ban on plastic bags, Styrofoam containers and single-use plastic straws, which took effect in July 2019.

“Together we want to make a change,” says Isabel Wijsen, now 17. “It’s all about changing people’s attitudes, to think outside the box.”

That mind-set is spreading to other areas, including beyond Bali. Since 2013, the Bye Bye Plastic Bags network has grown across 29 countries. Melati and Isabel have become famous young motivators, and they want to continue to inspire young people globally.

“We get nowhere by pointing fingers,” Isabel says. “We must take slow, transparent steps to bring change.”

A man burns trash under a bridge in Bali. Image by Jonas Gratzer for Mongabay.

Less than half of Bali’s generated garbage is disposed of properly — either recycled or sent to landfills — while the rest is burned or dumped in nature. This results in 33,000 tons of plastic waste entering the ocean each year.

As the numbers of tourists has steadily grown (up 10% in 2018 from the previous year), so has the amount of trash; tourists produce 3.5 times the waste of locals, accounting for 13% of the total trash output. The government is trying to find a balance between increasing visitor numbers and combating the contamination. It recently entered into a collaboration with The Bali Partnership, an organization that supports President Joko Widodo’s national initiative to reduce ocean plastic waste by 70 percent by 2025.

Recent polls show that Bali residents are ready for change, where a majority want to recycle and reduce their waste.

More than 400  cultural and religious organizations, the private sector and members of the local government will work together in Bali’s 15 most highly prioritized areas, which have the most acute lack of proper garbage disposal. The five-year goal is to cut the 33,000 tons that end up in the ocean by half.

Indonesia, a G20 nation that’s home to more than 260 million people, is growing rapidly, both in terms of its population and its economy. Its waste management infrastructure has failed to keep pace, however, with only 39% of waste collected for processing, recycling or dumping at a landfill.

The result is 40 million tons of waste being either burned — and releasing dioxins, heavy metals and greenhouse gases — or dumped directly in nature — contaminating the soil, groundwater, rivers, and the sea — every year. 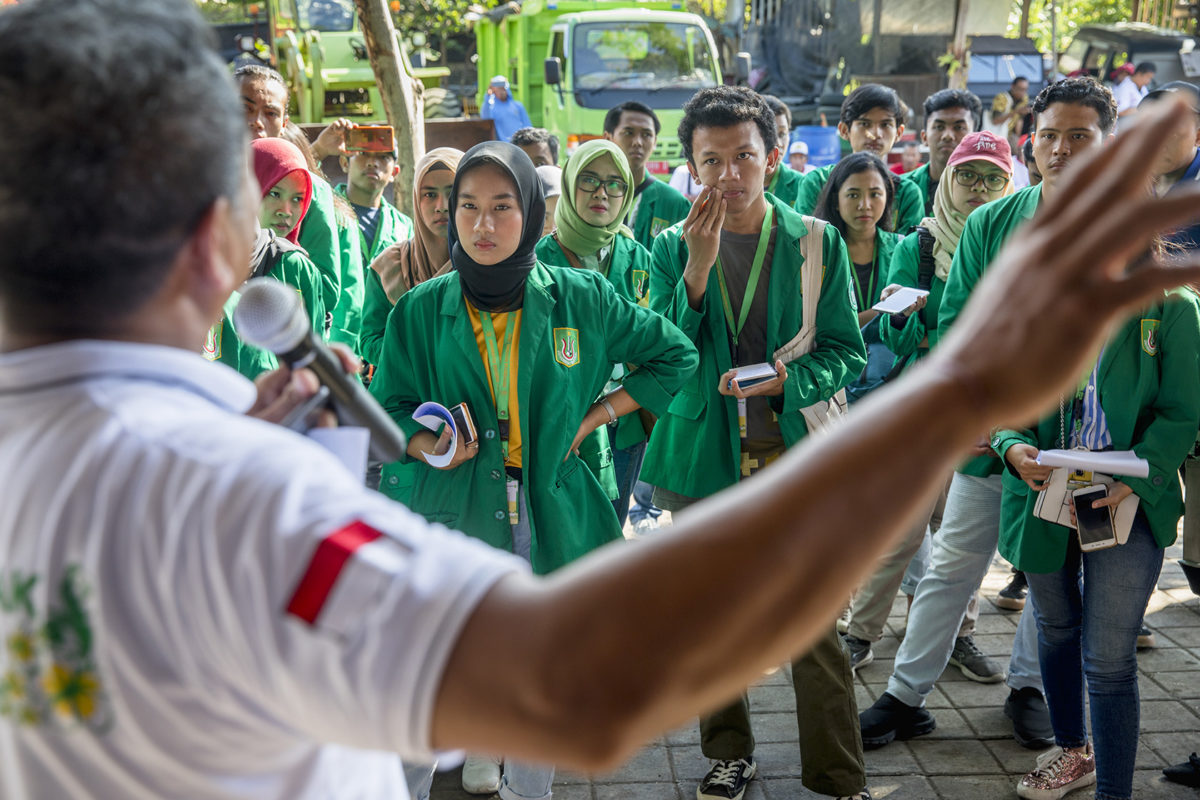 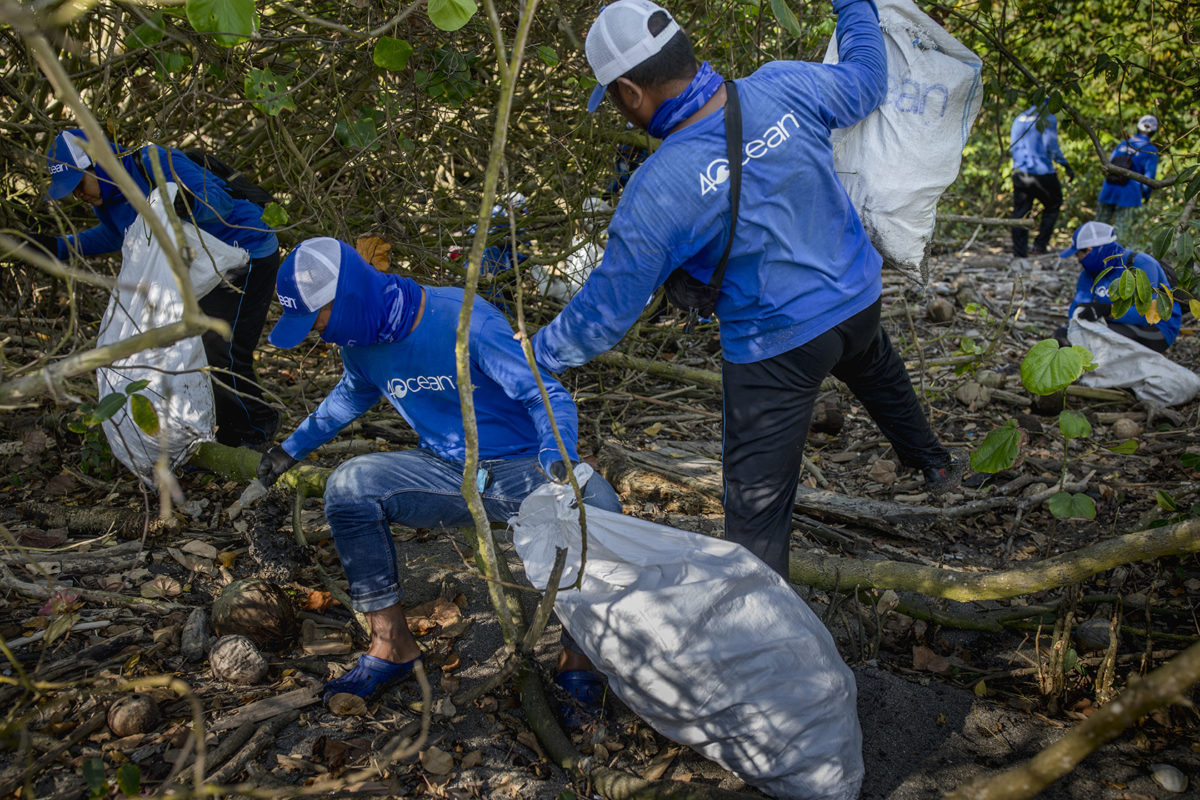 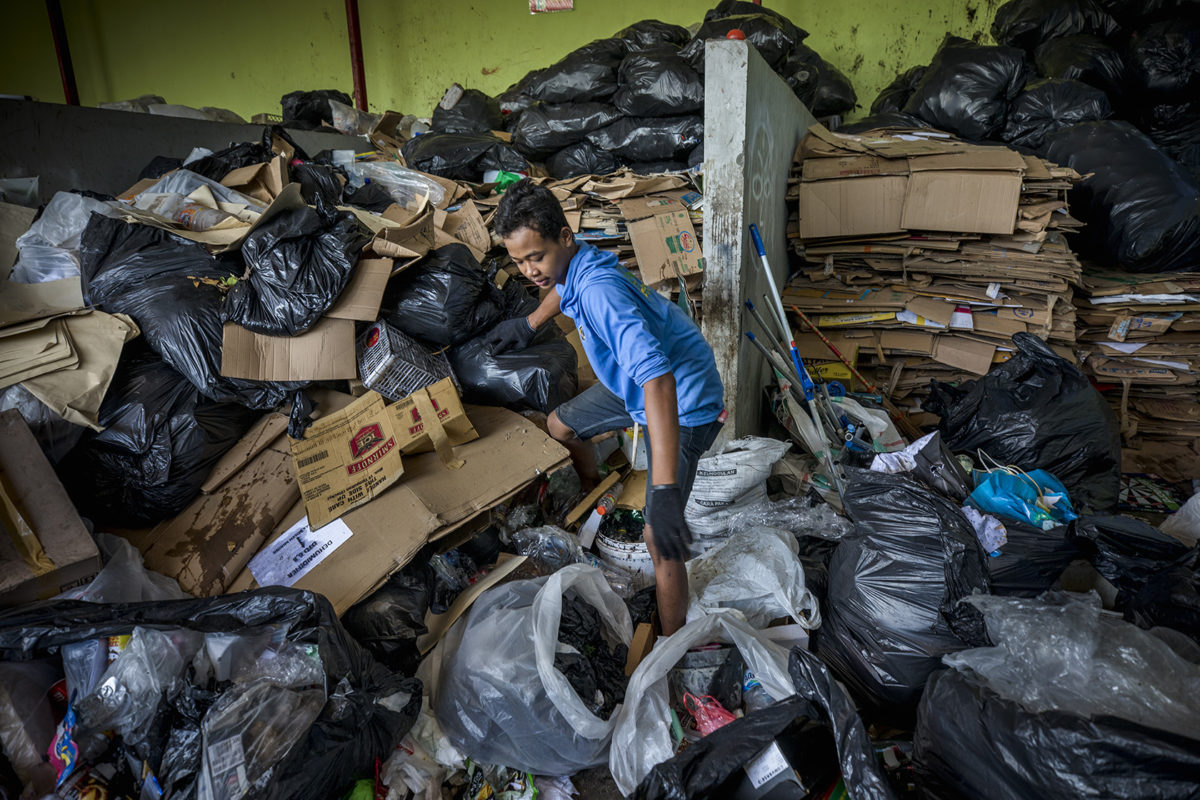 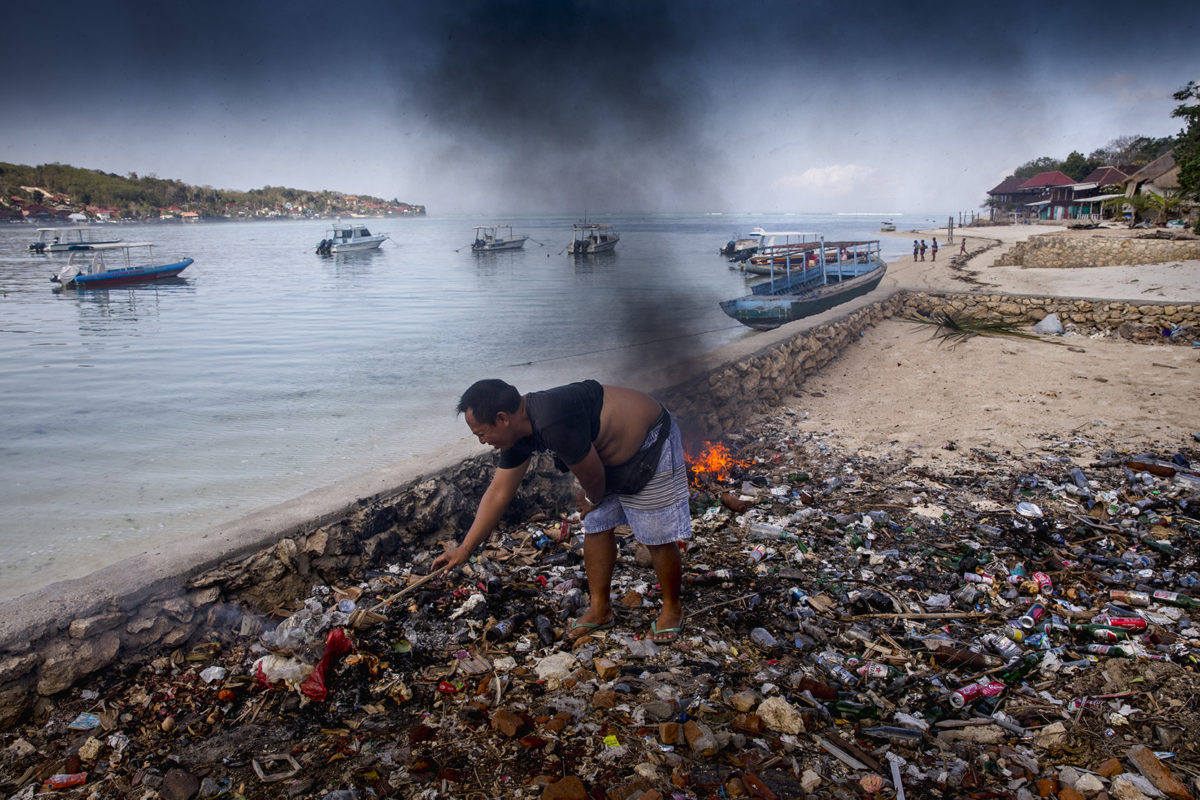 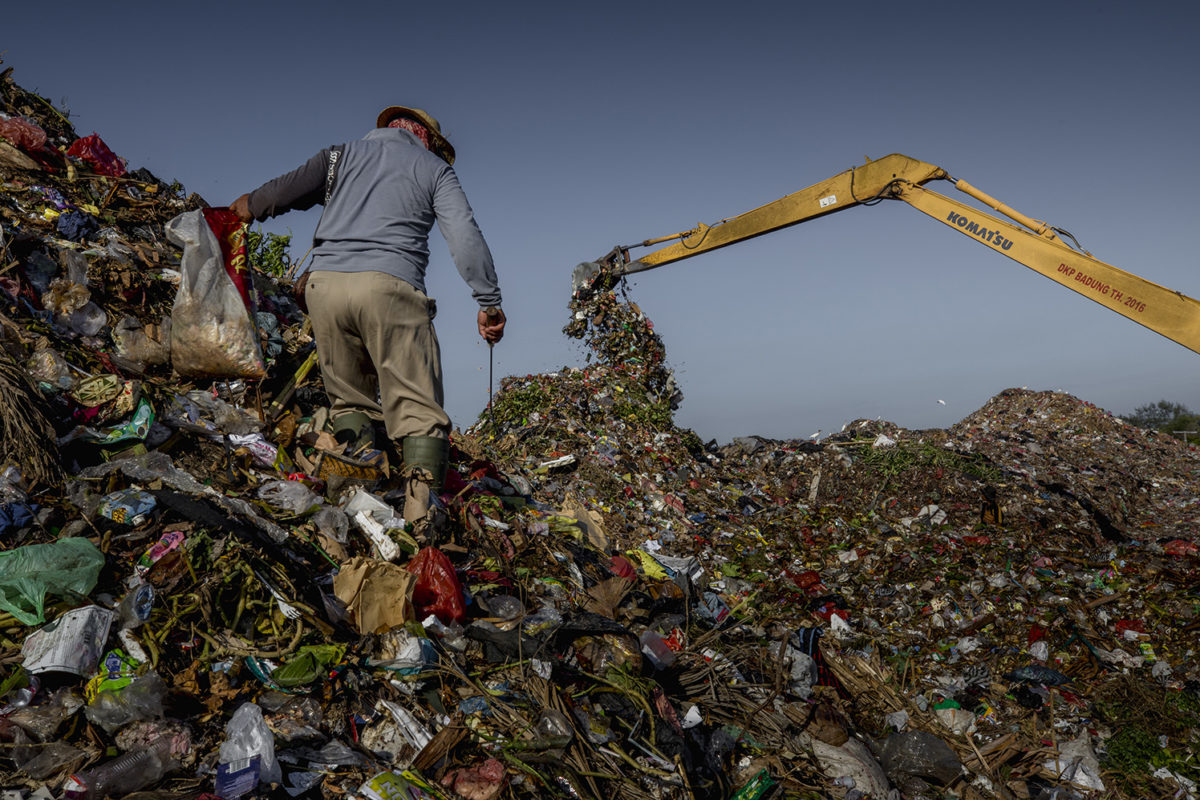 A factor for the waste disposal problem is the decentralization of the management system. In Indonesia, communities are generally responsible for collecting waste from each household and sending it to local transfer stations or temporary disposal sites. Local governmental waste-collection agencies are usually responsible only for gathering the waste in larger trucks from these aggregation points, as well as from main roadways, markets and other public facilities, and transporting it to dedicated landfills. Other countries in the region, such as Malaysia and the Philippines, have centralized waste-collection systems that function better in terms of gathering and sorting the waste.

“There are more than 80,000 villages across Indonesia,” says Joi Danielson, program director for ocean plastics at SYSTEMIQ, a founding organization of The Bali Partnership. “Expecting each one to have the technical ability, interest and funding available to set up and operate its own local waste-collection system has not worked, nor is it an operationally efficient approach.

“Even when there is a passionate village leader willing to work through these constraints, political elections shake the permanence of any waste system built,” she adds. “To dump and burn the waste is free.”

To address this issue, Bali has started construction of recycling facilities. In the western district of Jembrana, one of the worst affected areas, a number of these facilities are expected to come online this year through the STOP project, one of many aimed at reducing plastic waste in 15 prioritized areas in Bali. The project’s administrators plan to work with the local and national governments to provide options for composting organic waste at both the community/home level and at large scale at integrated waste disposal sites, known as TPST. Under STOP, they will also build a TPST to sort inorganic waste and send it off for recycling. The project aims to establish 100% waste collection for all households and businesses in Jembrana and create a sustainable business model that is ultimately community-led. It will not only help with waste management at a local level, but is also expected to create jobs within the waste sector.

While The Bali Partnership tackles the existing waste, it’s also looking to prevent future waste output. One way is through outreach to local schools to educate children in environmental science. One such school is Sekolah Taman Tirta. Here, students are taught about the importance of not using plastics and of recycling. The school has an area where all the waste is recycled, with the organic waste composted for use on an adjacent patch of banana trees. The students also take the school’s “zero plastics” message home to their parents.

“I tell my mother not to use plastics, and we have started recycling at home,” says 12-year-old Agung Mahagangga.

If Indonesia wants to better manage its waste and reach the goal of reducing its ocean plastic output by 70% over the next five years, the country has to extensively track its waste collection, according to Gede Hendrawan, an expert on oceanic plastics and marine science at Bali’s Udayana University.

“It’s an ambitious target from the government — and we need to support it to accelerate the marine resources rehabilitation,” he says. “Each province and district in Indonesia must have baseline data related to waste generation, mismanaged waste, and plastics leaking into the ocean.”

It’s important to have that basic data in order to set a meaningful reduction target, he says.

“Without the baseline data, then we will not be able to know the efforts and achievements that have been made,” Hendrawan says. “Then the number will be only on the paper report, not the actual achievements.”

In the case of Bali, this means building more waste banks where trash is sorted, as well as composting facilities, which will reduce the total amount of waste going to the island’s 10 landfills. Stricter law enforcement also needs to be in place to tackle the dumping of waste, and rivers will have to be cleaned up.

“Installation of trash traps in the river will also help to reduce the waste dumped into the ocean. But we not only need the trash traps downstream, but also several trash traps along the rivers, say at each village border,” Hendrawan says.

He welcomes the ban on plastic bags, but cautions that it won’t be enough without proper waste management: “The government needs to build a good waste management [system] as soon as possible.” Without that, he says, “banning other single-use plastics will not solve the main problem.”

Danielson says the information is there for policymakers to act; the government just needs to implement the set-out targets, she says, including by exercising its power to remove the structural constraints in the country’s current waste management systems. She adds that empowering projects like STOP is an important tool for achieving national goals on waste handling, reduction and ocean plastics.

Isabel Wijsen started the Bye Bye Plastic Bags movement in Bali seven years ago with her sister, when she was just 10. Since then, the Bali government has issued a ban on single-use plastics and Styrofoam. Image by Jonas Gratzer for Mongabay.

Banner image of a trash picker looking for recyclable plastics at a waste dump in Bali, by Jonas Gratzer for Mongabay.