Averting an agricultural and ecological crisis in the Philippines’ salad bowl

BENGUET, Philippines — Every day, at least 1,500 metric tons of semi-temperate vegetables are trucked down from Benguet, a mountainous province in the northern Philippines, to depots called bagsakan in the country’s capital, Manila.

The volume of deliveries can triple around holidays like Christmas and Easter, when demand surges. From Manila, crops are shipped across the archipelago, meeting 80 percent of the country’s demand for semi-temperate vegetables like potato, cabbage, radish, chayote, carrot, lettuce, and broccoli.

Seated atop the Cordillera mountain range, the province of Benguet’s high altitude favors the production of such crops, also referred to as highland vegetables. Its annual production is at least 1.1 million metric tons, earning it the moniker of the “Salad Bowl of the Philippines.”

However, half a century of toiling the land to feed millions across the country is leading to the slow decimation of forest cover and the soil’s inevitable deterioration as farmers resort to chemical-heavy fertilizers to boost yields.

The growing number of farmers and farmland in the region, all planting upland vegetables, has also resulted in fluctuating vegetable prices and oversupply, which often leads to spoilage and losses for farmers.

To ease these problems, the government has started introducing agricultural strategies, among them providing farmers with data-driven planting schedules to optimize profits while minimizing environmental damage; and agroforestry, an efficient use of land to combine trees with shade-loving shrubs and crops. 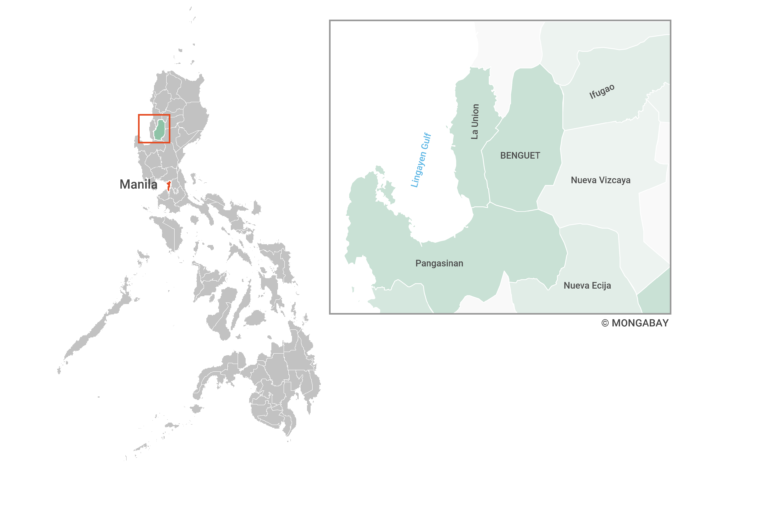 The high demand for highland vegetables has driven deforestation in the mountains as farms encroach even into protected areas.

Around 70% of the 5,513-hectare (13,620-acre) Mount Data National Park has been converted into vegetable gardens and residential areas, even though it has been designated a protected area since the 1940s, says Ralph Pablo of the region’s Department of Environment and Natural Resources (DENR).

The degraded status of Mount Data compelled the Protected Management Area Board (PAMB) to downgrade the park’s status in 2016, a proposal the environment department rejected. Instead, the latter opted to protect the remaining 90 ha (222 acres) of mossy forests against expanding vegetable farms.

In the town of Buguias, at the foot of Mount Data, farms have sprawled across almost 9,500 ha (23,500 acres), more than half of its 17,588-ha (43,500-acre) land area. Much of that falls within Mount Data’s protected area, but the environment department is unable to provide figures for how much encroachment has occurred.

In nearby Mount Pulag National Park — home to hundreds of endemic plants and animals, including the greater dwarf cloud rat (Carpomys melanurus), thought to be extinct since 1896 until it was rediscovered in 2008 — farms expand almost by the week, says park superintendent Emerita Albas. Farms and settlements have taken over around 25% of the park, and local indigenous communities have taken the initiative to form management zones to halt the spread of vegetable gardens.

Water systems have also been affected by the destruction of forests. The Benguet Provincial Environment and Natural Resources Office (PENRO) has found that small water systems like creeks and springs have dried up over the years.

As farm expansions aggravate the need for more water sources, water levels have gone down in several tributaries of the Agno River Basin, one of the largest basins in the country, which drains out into the West Philippine Sea, near settlements and vast agricultural lands.

The decrease of water levels is largely due to deforested watersheds and resulting siltation from erosion, but PENRO says the problem is exacerbated by redirection of streams for irrigation or farm reservoirs.

Years of intensive commercial farming have forced farmers to use chemical-heavy practices that are taking a toll on the land. Extensive testing conducted by Benguet State University (BSU) and the provincial government since 2008 showed increasing soil acidity in Benguet’s farmlands, with most areas falling below the 5.5 to 6.5 pH range, the optimum soil level to grow vegetables. Below this range, plants are unable to absorb certain key nutrients from the soil.

Provincial agriculturist Lolita Bentres says the poor condition of the soil is due to prolonged heavy use of synthetic inputs and unprocessed chicken manure, the fertilizer of choice for most farmers as it is cheaper than commercial ones. The widespread practice of directly applying chicken manure without composting, which breaks down its high nitrogen content, acidifies the soil and can transmit harmful pathogens.

Damaged soil leads to greater reliance on synthetic inputs to increase produce, which in turn, gradually destroys the natural state of the soil. Some farmers have turned to mixing powdered limestone to neutralize the soil’s acidity, but repetitive use leads to hardening of the ground, eventually rendering it unworkable. With depleting yields, farmers resort to illegally clearing out watersheds in search of richer grounds, which reduces forest cover and harms wildlife.

Because Benguet is a mountainous province, the chemical inputs also pose direct hazards to forest and water areas — including nearby Mount Pulag National Park, the highest peak in the Philippines’ central archipelago of Luzon — and affect more biodiversity, according to PENRO.

Should these problems persist, Benguet will not only stand to lose its vegetable industry but will significantly scar its natural resources, says Cameron Odsey, director of the Department of Agriculture for the Cordillera region.

To avert the looming agricultural crisis and ensure sustainability, the agriculture department has suggested two solutions: crop programming and agroforestry.

In crop programming, the department of agriculture provides municipal offices with information that can guide their planting decisions. This data factors in consumer demand as well as production across the province.

Odsey says this database has been compiled by the department to prevent farmers from planting the same types of produce. Farmers subscribe to the agriculture department’s data, which is available at its local offices.

This ensures that there will be no oversupply and that market prices stabilize. It also aims to ensure local produce is competitive against global imports.

Simultaneously, the department recommends shifting to “good agricultural practices,” or organic farming. Consumer demand for chemical-free vegetables is increasing, says Bentres, but many farmers are resistant to adapting to organic methods.

Shifting to organic farming means farmers have to sacrifice high vegetable yields for a period of time to allow the soil to rejuvenate and get rid of the chemicals, Bentres says. Traditional farmers are cold to the idea but it’s a choice they will eventually need to make, she says.

“They need to adapt and change because the land is not expanding and growing,” Bentres says. “With the growing public awareness on climate change, forest protection is now everybody’s concern.”

Farming intercropped leguminous vegetables like peas and beans, which host a symbiotic nitrogen-fixing bacteria called rhizobia, has also been pushed forward, along with introducing mokusaku, an organic-based Japanese multi-functional liquid concoction that can rejuvenate the soil while acting as an insect repellent and fungicide. “But barely one-fourth of the estimated 100,000 farmers patronized these approaches,” Bentres says.

Recently, the environment department introduced the concepts of agroforestry and agritourism as alternatives to the intensive agriculture practiced in the region, to balance both the community’s needs for livelihood and environmental protection.

In agroforestry, trees are planted alongside shade-loving shrubs and crops like coffee to balance food supply, biodiversity conservation, and sequestering carbon. In other parts of Benguet, intercropping Arabica coffee under pine and alnus trees is rapidly getting headway after Oliver Odiem, a coffee farmer in the town of Atok, received the highest distinction in the 2018 Philippine Coffee Quality Competition. Those two trees provide the best shade for Arabica, he says, inspiring legions of Benguet coffee farmers to replicate his efforts.

Farmers have begun experimenting with intercropping flowers after prices of vegetables dipped in the early 2000s due to buyers growing wary of heavy pesticide use in Benguet vegetables, says Apolinario Celo, a vegetable and flower farmer in Atok.

“Although seasonal, there is good profit derived from it. Without areas left to expand, it is a dependable alternative,” Celo adds. A few local farmers have totally shifted to flower production using greenhouses to ensure year-long harvest, he says.

Amid an upswing in local tourism and an increased desire by urbanites to experience rural life, upland farms have also become tourist attractions, giving birth to another mode of livelihood for farmers in the north: agritourism, where guests either lodge at homestays to sleep in the rice terraces or pick their produce themselves.

Enterprising farmers have opened homestays for thrill-seekers wanting to experience the cold weather that causes frost on the vegetables during the peak monsoon months from November to February. In the towns of La Trinidad, Tublay and Atok, several farms offering vegetable picking and tours have started to gain popularity.

“Farmers are starting to realize that there are livelihood alternatives which are sustainable and long term by using the forest rather than clearing them,” says Myrna Pablo of the Department of Trade and Industry for the Cordillera region.

With intensive grassroots education, Bentres says she believes farmers will be capable of redirecting the highland vegetable industry toward safe and sustainable agriculture. “Vegetable farming is deeply rooted in Benguet and farmers need to change and adapt to changes in time, else risk losing their livelihood and home,” she says.