On July 31, Brazil’s Environment Minister Ricardo Salles tried to explain the data showing a huge deforestation outbreak detected in June this year, but his success was essentially zero. The following day, on August 1, he held a press conference with President Jair Bolsonaro, the Minister of Foreign Affairs (Ernesto Araújo), and the head of the Institutional Security Office (General Augusto Heleno). Minister Salles made a presentation questioning the data produced by INPE (National Institute for Space Research) from its DETER (Deforestation Detection in Real Time) system. These data pointed to an 88% increase in the deforestation detected in June 2019, compared to the same month in 2018. The minister alleged that INPE’s data contained two flaws that supposedly rendered the numbers “untrue”: 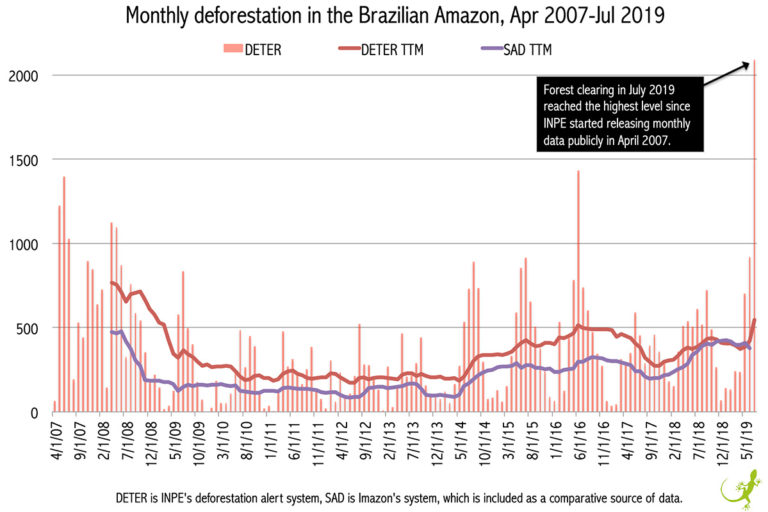 Deforestation carried out in previous months

The first criticism was that some of the 3250 polygons (the outlines on satellite imagery around deforestation areas) that were detected in June contained deforestation that had “started” in the months prior to June without being registered by the DETER system. He highlighted some of these polygons where deforestation had begun before January 1, 2019, when Jair Bolsonaro took office as president. Some polygons contained deforestation that had occurred between August and December 2018 and one polygon had started in 2017. The minister argued that the area of these polygons should be subtracted from the 978 km2 clearcut that had been reported in June 2019, which would reduce the percentage increase from June 2018.

The monthly data produced by DETER do not record deforestation performed in the nominal month (as Minister Salles assumed), but rather deforestation that was detected in that month. Of course, polygons detected on the first day of the month will be entirely composed of deforestation done in previous months, while those detected on the last day of the month will have a larger proportion cleared within the nominal month itself. Even if the deforestation that had occurred before the Bolsonaro presidency were subtracted, it is unlikely that the result for June 2019 would be anything other than a large increase. The basic fact is that deforestation erupted explosively in the Bolsonaro presidential administration, and the data confirm this. It is also good to remember that the deforestation detected in June 2019 that was carried out in 2018 had an important contribution from the effect of Bolsonaro as a candidate and later as president-elect. Between June and September 2018, which were the last months of the election campaign when it was evident that candidate Bolsonaro was going to win, deforestation increased by 36% over the same months in 2017, which is believed to be a result of the presumption of impunity generated by the candidate’s rhetoric.

The way DETER works is a necessity because each clearing needs to reach a relatively large size before it is detected, making it only natural for each clearing to take some time to grow to the minimum detection size. This does not mean that deforestation prior to the month of polygon detection should be discarded, much less that the entire polygon should be discarded as suggested by the minister. The same methodology that DETER applied in June 2019 was used to generate estimates for June 2018, and the 2018 number should contain a similar percentage of detected deforestation that began in previous months, as would be the case for all monthly data. Minister Salles only spoke of subtracting the polygons where deforestation began in previous months in the case of June 2019. However, to have a valid comparison the same would have to be done for the polygons detected in June 2018. With the June values for both years lowered by a similar percentage, the increase from the new value for June 2018 to the new value for June 2019 would be similar to the 88% shown by the current data.

The second alleged failure pointed out by Salles was that there were some partial overlaps between polygons detected in June 2019 and polygons that had already been detected and accounted for and in previous months, according to high-definition images being sold by Planet. Minister Salles wants to hire this company (or a potential competitor) to monitor deforestation for the Ministry of the Environment, a move that has been interpreted as having the purpose of removing INPE’s autonomy with regard to deforestation studies. Polygon overlays on the Planet imagery indicate that there was double counting of the overlapping parts. The inaccuracy of the locations in the DETER system that this reflects should, in fact, lead to some (small) overestimation of the deforested area. However, this does not invalidate the estimated 88% increase in deforestation that DETER detected in June 2019 compared with June 2018 — the increase percentage would have no systematic bias because a similar overlap percentage should also exist in the 2018 data. Of course, as with any estimate, there is a range of uncertainty both below and above the calculated value, but this does not mean that the estimate is invalid. In the case of DETER, the sum of the areas detected from August of one year to July of the next year is almost always smaller than the deforestation recorded every year for this same interval by INPE’s most precise monitoring system: PRODES (Monitoring Program for Deforestation in the Amazon). This means that the net effect of bias in DETER is downward, not upward.

President Bolsonaro commented that he believes the high number for deforestation detected in June is the result of “bad faith” on the part of someone inside INPE, and implied that such a person must be producing false data to undermine Brazil’s image abroad. The president has been attacking INPE for several weeks because of bad news about deforestation. At the August 1 news conference, the president said there would be “summary dismissal” of the person or persons if bad faith were confirmed. However, nothing that was presented indicates any kind of bad faith.

General Heleno commented that letting data into the public domain indicating a large increase in deforestation indicates a lack of “love for the fatherland,” and that even if the numbers were true, the numbers should be “treated internally”. Unfortunately, what the data indicate is that there really is a big deforestation surge in the first dry season of the Bolsonaro government. The following day, on August 2, the director of INPE was informed of his removal from office.