Under the sea: Life is the bubbles in newly described deep-reef zone

Scientists have described a new zone in the Caribbean’s deep ocean, shining a light on a little-known world that’s home to numerous previously unidentified reef-fish species.

The area in question lies at a depth of between 130 and 309 meters (427 and 1,014 feet). Scientists have proposed calling it the “rariphotic” (“scarce light”), in a recently published study in the journal Scientific Reports.

The rariphotic joins two previously defined “faunal zones,” or layers of the ocean that host marine life: shallow areas and the mesophotic. The shallow zone refers to the band of ocean running from the surface down to a depth of about 40 meters (131 feet), where reef corals abound and SCUBA divers can normally go. The mesophotic (“middle light”) falls below this, down to 150 meters (492 feet), where some corals can still survive.

Below these and the rariphotic lies the aphotic region, where there is effectively no light and relatively fewer marine species, including anglerfish, lanternfish, segmented worms and siphonophores.

The classification of the rariphotic came about after surveys between 2011 and 2016 in the waters off southern Curaçao by marine scientists from the Smithsonian’s National Museum of Natural History. As warming surface waters sparked a decline in the health of shallow reefs, the scientists looked at the deep-reef ecosystems.

This region, sometimes known as the “coral reef twilight zone,” has long been thought of as a refuge for shallow-water organisms. Indeed, the Smithsonian team’s findings corroborated previous research showing that assemblages of the kinds of reef-fishes that inhabit shallow water have double the depth range they were previously thought to have as their coral homes deteriorate.

“[T]ropical deep reefs are not barren landscapes on the deep ocean floor: they are highly diverse ecosystems that warrant further study,” Carole Baldwin, curator of fishes at the Smithsonian and lead author of the report, said in a statement.

“It’s estimated that 95 percent of the livable space on our planet is in the ocean. Yet only a fraction of that space has been explored,” she added.

The scientists said their research had “resulted in the most extensive database to date on the diversity and depth distributions of reef fishes” between depths of 40 to 309 meters below the surface, “at a single location anywhere in the tropics.”

During the underwater surveys, carried out with a manned submersible vehicle, the researchers observed nearly 4,500 fish thought to belong to 71 species. Within just one 20-hectare (49-acre) area of reef, they identified 30 new species.

Using techniques such as DNA barcoding, they analyzed the fish to determine which species were previously documented and which were entirely new. The analyses “clearly point to the existence of a faunal zone immediately below the mesophotic that extends down to at least 309 meters and that is home to a unique reef-fish fauna.”

The image below shows families of reef-fish species observed in the study, with the predominant depth category to which each can be assigned. 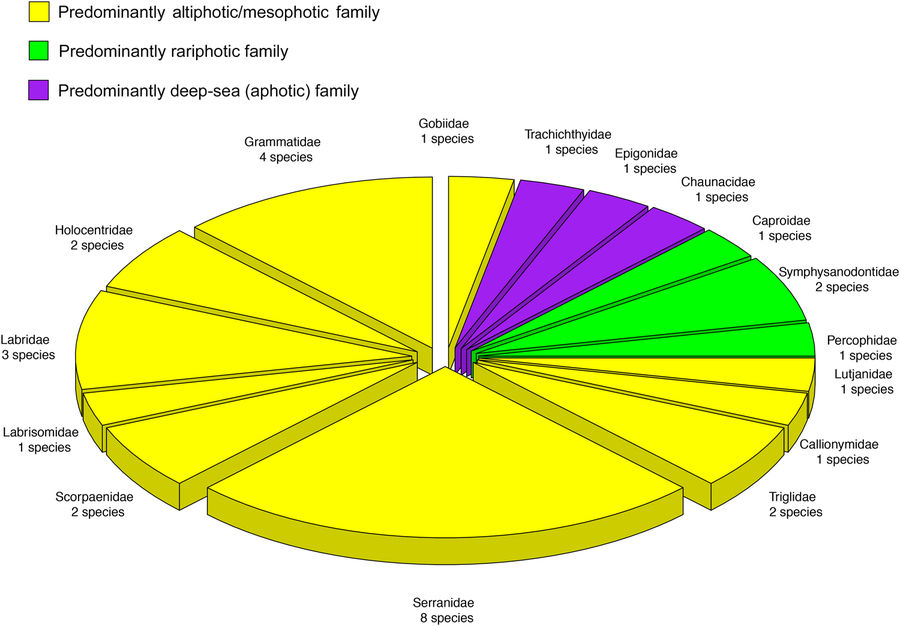 “About one in every five fish we’re finding in the rariphotic of the Caribbean is a new species,” said Ross Robertson, marine biologist at the Smithsonian Tropical Research Institute and a co-author of the paper.

Most of the fish in the rariphotic zone look similar and are more closely related to true deep-ocean fish, which belong to quite different branches of the evolutionary tree, the researchers said.

In addition to the describing a new faunal zone, the Smithsonian researchers also suggested changing the name of the band of shallow water to “altiphotic,” or high light.

“We hope that by naming the deep-reef rariphotic zone, we’ll draw attention to the need to continue to explore deep reefs,” Baldwin said.