Fluorescence — the ability to absorb high-energy or short-wavelength light of one color and emit light of a longer wavelength and different color — has been recorded in many marine animals including fishes, sharks and sea turtles. But fluorescence in land animals is rare, known only in parrots and some scorpions.

The polka dot tree frog is the first known fluorescent amphibian, researchers report in a new study published in the Proceedings of the National Academy of Sciences.

When herpetologists first collected specimens of the frog from the outskirts of the city of Santa Fe in Argentina, they expected the frogs to emit a faint red fluorescence due to high concentrations of biliverdin in the animals’ lymph and tissues. Biliverdin is a breakdown product of hemoglobin, and some previous studies have shown that complexes of some proteins and biliverdin glow a fluorescent red under UV light.

But the frogs were glowing a bright blue-green.

“It was really amazing,” study co-author Norberto Peporine Lopes of the University of Sao Paulo, Brazil, told Mongabay. “We could see the frogs glowing, giving a very green/blue contrast with respect to the plants in which they were standing. 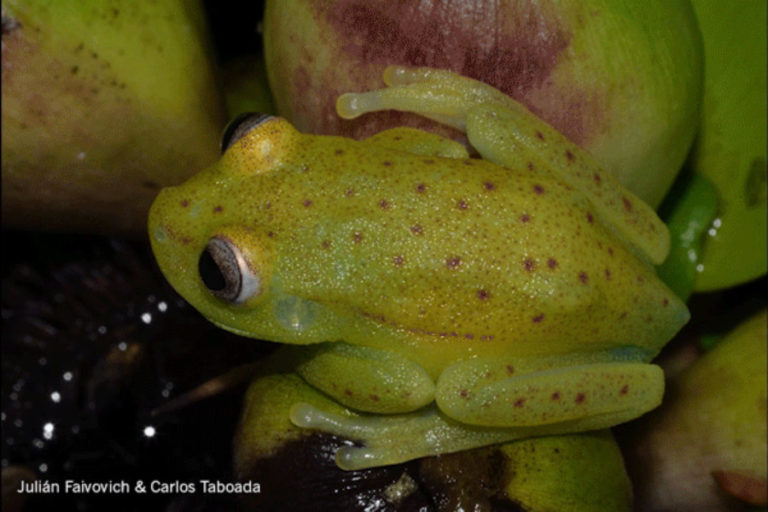 Surprised by their findings, the researchers attempted to identify the source of the fluorescence, and traced it to a new group of molecules, which they named hyloins. These molecules occur in the frog’s lymph tissue, skin and glandular secretions, and are unique among known fluorescent molecules in animals, Lopes told Nature.

The researchers are still investigating the purpose of fluorescence in the polka dot tree frog. But it most likely “enhances brightness and visual detection among individuals under conditions of moonlight or twilight,” study co-author María Gabriela Lagorio of the City University of Buenos Aires, Argentina, told Mongabay.

They add that several other frog species have similar characteristics as the polka dot tree frog, such as a translucent skin and a high concentration of biliverdin in lymph and tissues. These species must be tested for fluorescence, they write.

“I’m really hoping that other colleagues will be very interested in this phenomenon, and they will start carrying a UV flashlight to the field,” study co-author Faivovich, a herpetologist at the University of Buenos Aires, told Nature.