Halting deforestation is such a critical part of combating climate change that it was enshrined in the Paris Climate Agreement as a standalone article — yet few countries systematically monitor the drivers of deforestation within their borders.

In an attempt to at least partially remedy this state of affairs, Veronique De Sy, a scientist at Wageningen University in the Netherlands who also works with the Center for International Forestry Research (CIFOR), led a team of researchers who studied satellite imagery to quantify the drivers of deforestation in South America between 1990 and 2005. The results have just been published in the journal Environmental Research Letters.

De Sy and team first determined areas of deforestation based on the 2010 global remote sensing survey of the Food and Agricultural Organisation Forest Resource Assessment. In order to assess what drove that forest destruction, De Sy visually inspected high-resolution satellite imagery in order to ascertain to what use the land was put to after the forest was razed.

“It was quite labor-intensive,” De Sy said in a blog post on the CIFOR website. “The task of visually confirming every data point of deforestation took me about a year, but I got a really nice result, so it was worth it.”

The results are not terribly surprising: Pasture was responsible for the vast majority, or 71.2 percent, of deforestation in South America, as well as 71.6 percent of related carbon loss. The chief hotspots where forests were replaced by pastureland were Northern Argentina, along the arc of deforestation in Brazil, and Western Paraguay, according to the study. 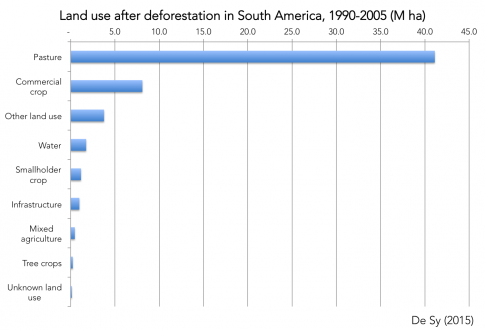 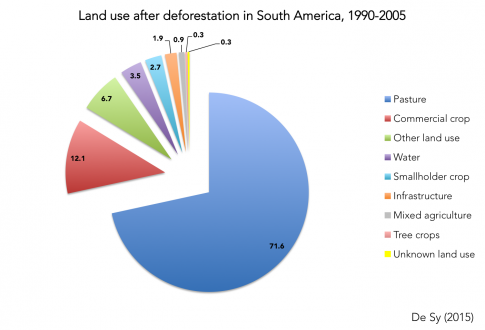 “We know that these were some of the worst years for deforestation in South America, particularly in Brazil,” De Sy said. Of course, beginning around 2004, the deforestation rate in Brazil dropped sharply, and despite inching back up again last year, remains historically low today.

But the findings in Brazil from 1990 to 2005 are especially troubling because deforestation gradually moved deeper into higher biomass forests, causing additional carbon emissions, De Sy added. Brazil was responsible for nearly two-thirds of the South American deforestation that occurred in that time period, and pastureland was the culprit 81.8 percent of the time.

After pastureland, the second most common driver was found to be commercial cropland, responsible for 14 percent of deforestation and 12.1 percent of emissions. Hotspots included Northern Argentina, Brazil’s Mato Grosso State, Central Bolivia, and Eastern Paraguay.

“For policymaking, this information is quite important because you can be informed not only of the areas to focus on, but also of the agents responsible for the deforestation,” De Sy said. “For most South American countries, large agri-businesses are the agents of change. And although pasture was clearly dominant, commercial cropping was also highly significant in some countries, like Bolivia and Argentina. Only in one country — Peru — was smallholder cropping a dominant driver of forest clearing.”

A July 2015 study found that fully 54 percent of global loss of natural forests — or 44 out of 77.5 million hectares (about 108 million out of 191.5 million acres) — was in Latin America, and De Sy’s results would seem to confirm previous research into the cause of that deforestation. One December 2015 study, for instance, found that Argentina, Bolivia, Brazil, and Paraguay were responsible for over 80 percent of total forest loss in Latin America in the 2000s, and that beef production was far and away the most dominant driver of that forest destruction, followed by commercial soy production. 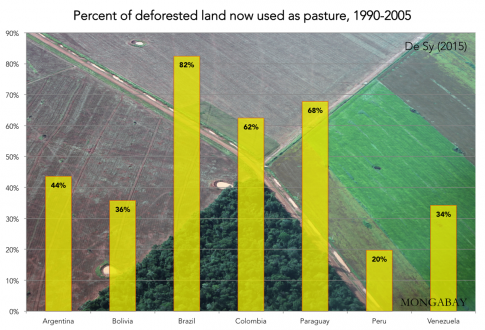 De Sy’s research not only quantified each deforestation driver, but showed how they changed throughout the course of two separate time periods, 1990 to 2000 and 2000 to 2005. “Between the two time periods covered by the study, we actually see an increase in deforestation,” De Sy said. “Commercial cropping played a larger role during the latter time period, but it was still a distant second to pasture.”

The study determined that, overall, about one million metric tons of carbon were released from South America between 1990 and 2005 as a result of deforestation. When those emissions are averaged out across the 15-year study period, forest clearing in South America would rank as the fifth highest annual carbon emission source in the world.

In light of the inclusion of the UN’s Reducing Emissions from Deforestation and forest Deagradation (REDD+) program in the Paris Climate Agreement, De Sy said that the results of her study can help countries interested in setting up their own monitoring systems to establish a baseline for deforestation, determine what drivers are most important, and what policies might be needed to address those issues.

“This paper can certainly give an indication of a baseline for countries that are setting up their own monitoring systems, including what drivers are important and what policies might be needed,” she said. “I think it’s important that countries design their own systems and their own ways of figuring out what the relevant drivers are. It all has to fit together, and that has to happen at the national scale.”