The rise, which was announced just ahead of the opening of U.N. climate talks in Paris, had been widely anticipated based on data from short-term satellite-based monitoring systems.

Climbing deforestation has been attributed to several factors, including Brazil’s flagging economy and currency, which makes forest conversion for agriculture more attractive; the government’s steep cuts in funding for programs to reduce deforestation; a renewed push for large-scale infrastructure projects in the Amazon; and relaxation of the country’s Forest Code, which governs how much forest must be preserved on private lands.

The state of Pará, which accounts for much of the agricultural expansion in the Brazilian Amazon, ranked first in terms of deforestation for the tenth straight year at 1,881 sq km. Mato Grosso, which from 1988-2005, was the Amazon’s top deforesting state, was second at 1,508 sq km. Mato Grosso (40 percent increase), Rondônia (41 percent), and Amazonas (54 percent) had the largest year-over-year increase on a percentage basis. Roraima had the biggest drop in forest loss at 71 sq km. 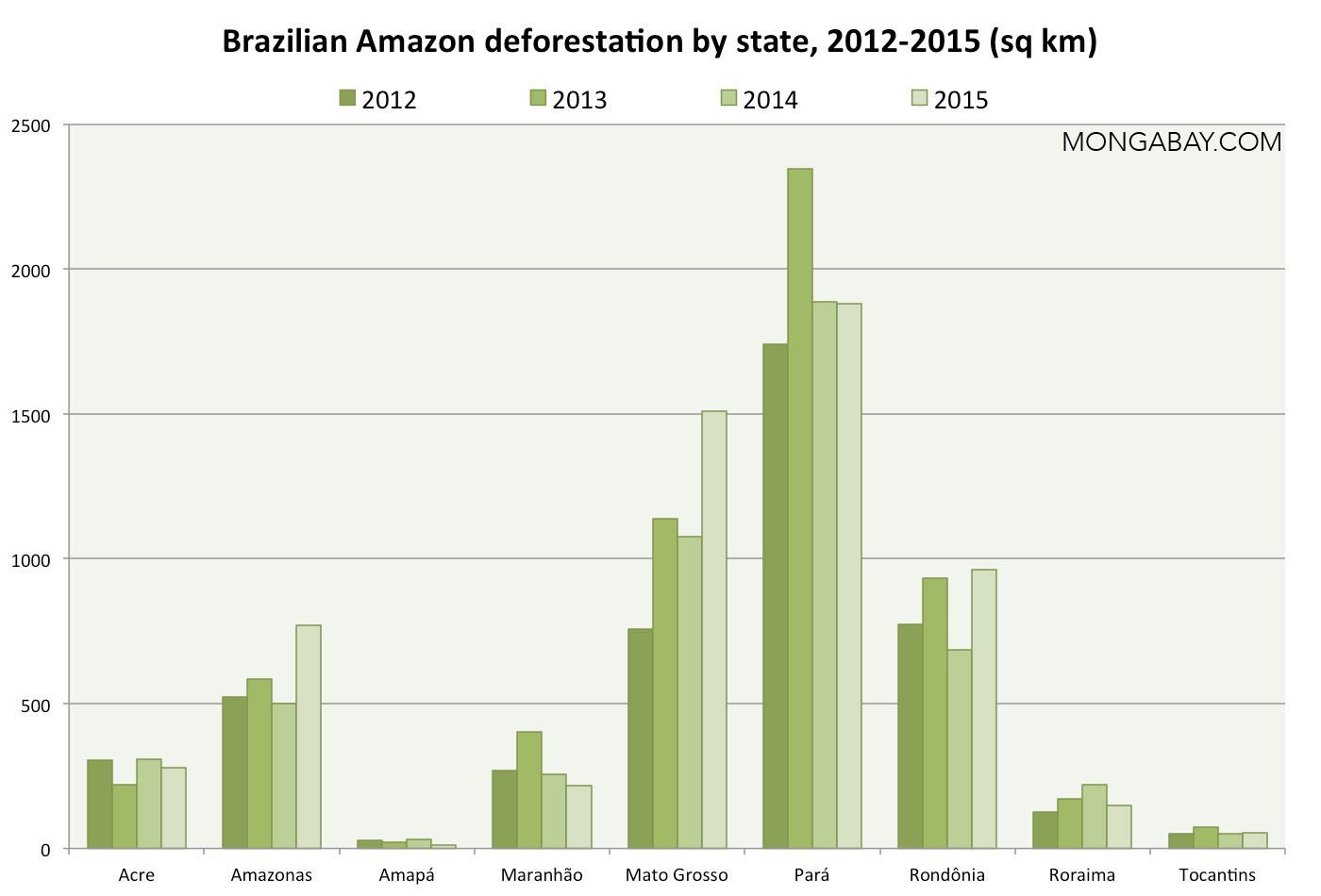 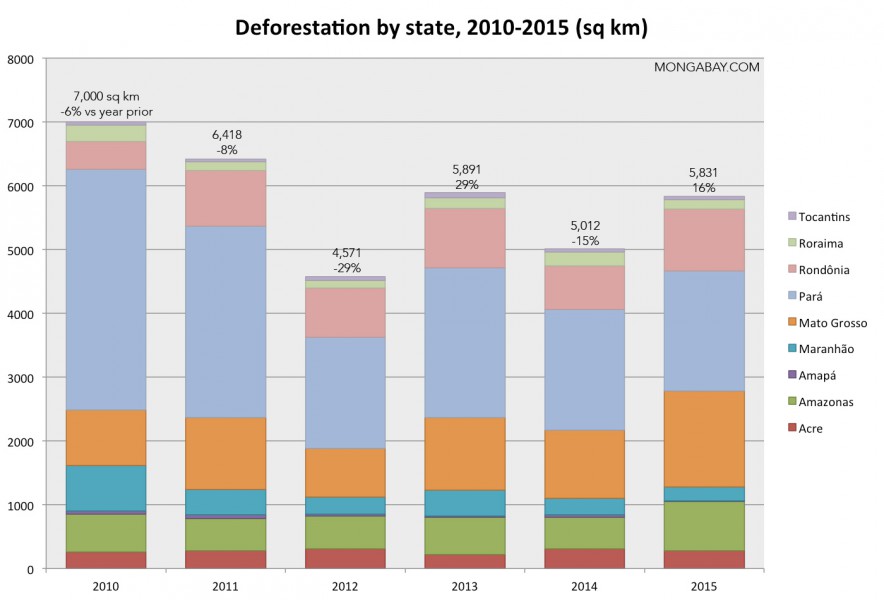 While Brazilian authorities have voiced concerns about illegal deforestation, much of the forest clearing in the Brazilian Amazon is legal. Landowners in the area classified as the Amazon rainforest biome are now required to register their properties and limit clearing to 20 percent of their land. That stipulation however is not always followed, especially in areas where governance is weak.

Despite the increase over the past year, the pace of forest destruction in Brazil continues to remain levels seen in the 1990s and 2000s, when forest loss averaged 17,000 sq km per year. Research published last year in the journal Science, estimated that the drop in forest clearing in Brazil avoided 3.2 billion tons of CO2 emissions between 2003 and 2013, a reduction equivalent to the savings that would have been achieved by taking all cars off American roads for three years. 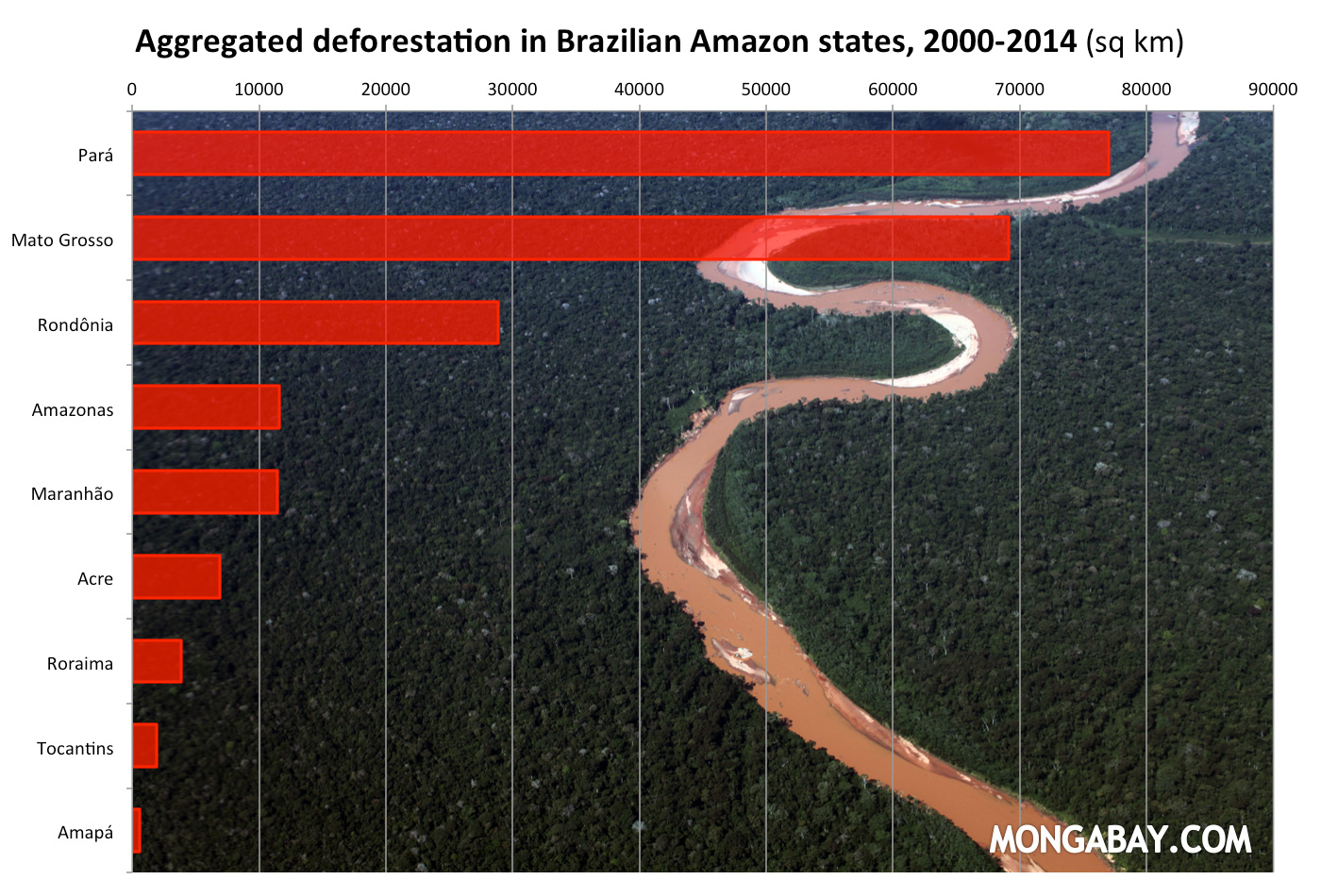 The latest INPE data are preliminary. Brazil typically releases “final” numbers in May after researchers have conducted more detailed analysis of satellite images. Imazon, a Brazilian NGO, also publishes an estimate, providing a check for the official numbers.

Over 60 percent of the Amazon rainforest — the world’s largest rainforest — lies within the borders of Brazil. Just under a fifth of the ecosystem has been destroyed since the 1970s. Most of that loss occurred in Brazil.

Scientists fear that continued destruction and degradation of the Amazon, combined with the effects of climate change, could tip the region toward a drier, more fire-prone landscape by the end of the century. Given that the Amazon rainforest provides water to regions that generate roughly two-thirds of South America’s GDP, any significant disruption to the ecological function of the biome could have substantial implications for regional economies. Already major cities in Brazil, including Rio de Janeiro and Sao Paulo, are dealing with severe water shortages that some researchers have linked to regional reduction in forest cover.