International financing for forest conservation in three key African forest countries — the Democratic Republic of Congo (DRC), Ghana, and Liberia — has increased steadily since 2009, but each country faces unique challenges going forward, according to a trio of new reports.

The Congo Basin in Central Africa is home to the second-largest tropical rainforest in the world after the Amazon. The Congo rainforest is famous for its gorillas, chimpanzees, and elephants, but is under severe threat from commercial agriculture, logging, and subsistence activities like small-scale agriculture and firewood collection.

The DRC contains more than half of the total area of Congo rainforest, so it’s no wonder that as the world has started to take climate change seriously, the DRC’s forests are receiving increased attention. International commitments to the DRC under the UN’s Reducing Emissions from Deforestation and forest Degradation (REDD+) program grew to more than a quarter-billion dollars by the end of 2014, according to a new report by Washington, D.C.-based nonprofit Forest Trends.

Of the $264.3 million committed to the country, 57 percent, or $151.3 million, had been paid out by the end of 2014, Forest Trends found. Over the six-year period between 2009 and 2014, the DRC moved from preparatory and capacity-building activities to more advanced implementation of forest conservation initiatives.

This progress culminated in the announcement of the Central African Forest Initiative (CAFI) late last year, which Forest Trends’ Brian Schaap said was a welcome sign that the governments of Norway and other European nations plan to continue supporting the DRC’s forest protection efforts into the future. 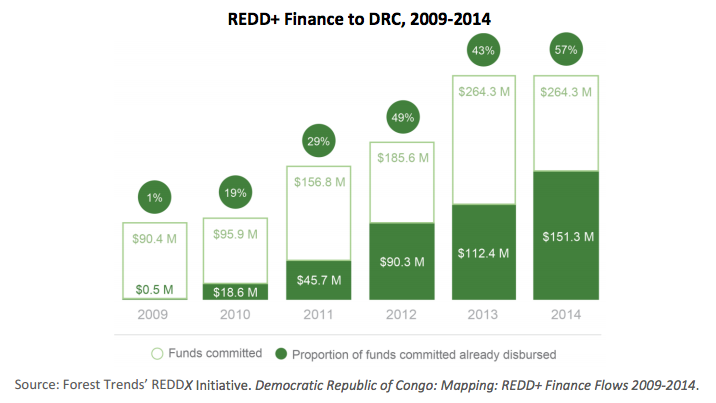 “Building on six years of experience and $150 million in funding used by DRC to build a foundation of REDD-readiness, CAFI is exactly the sort of innovative, collaborative, and results-based funding partnership needed to drive the REDD+ agenda forward in the country,” Schaap said in a statement.

Norway has pledged $240 million in financing to the DRC under CAFI, to be paid between 2016 and 2020. That’s just less than a quarter of the $1 billion the DRC government estimates it will need within that timeframe in order to fully implement its national Forest Investment Plan.

Financing to save West Africa’s Guinea Forests is flowing, too

The Guinea Forests of West Africa, the other major tract of lowland rainforest on the continent, are a biodiversity hotspot, home to more than 20 species of primates and more than a quarter of all of Africa’s mammals. But hunting, logging, mining, and human population growth are decimating the Guinea Forests and their inhabitants.

Between 2001 and 2014, Ghana lost an area of forest larger than Rhode Island — more than half a million hectares (a little over 1.2 million acres), or 9 percent of the country’s total forest cover. Ghana continues to lose two percent of its forests every year. Half of that deforestation is due to agricultural expansion, particularly for growing cocoa.

Forest Trends’ report on Ghana finds that $98.2 million in REDD+ funds were committed to the West African country between 2009 and 2014. 30 percent of that money, or $29.3 million, had been paid out by the end of 2014. A large portion of these funds are earmarked for designing and implementing Ghana’s Climate-Smart Cocoa initiative, which will cover 5.9 million hectares (about 14.6 million acres). 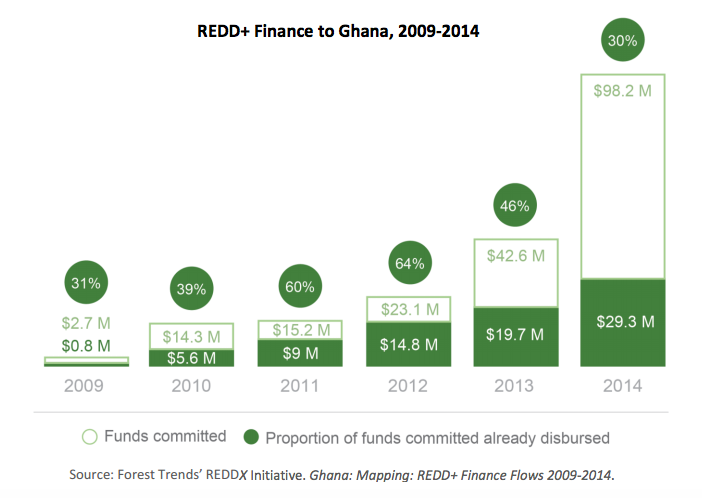 “Ghana has done a tremendous job of using its early REDD+ finance to design an ambitious program that aims to improve the livelihoods and incomes of its small-scale cocoa farmers, while also enhancing the environmental sustainability of the country’s cocoa production and reducing deforestation,” Dr. Rebecca Asare from the Nature Conservation Research Centre, a Ghanaian environmental NGO, said in a statement.

Liberia is home to about 43 percent of the Upper Guinean forest, but has experienced a sharp increase in logging since the end of its civil war in 2003. The country lost nearly 500,000 hectares (1.2 million acres) of forest between 2001 and 2012, 4.4 percent of its forest cover.

REDD+ financing to Liberia began to rise exponentially in 2014 after Norway pledged to greatly increase its funding to support Liberia’s forest conservation efforts (up to $150 million from 2015-2020, more than half to be results-based payments for verified emission reductions), according to a third Forest Trends report.

Of the $47.2 million in funding that was formally committed to Liberia by the end of 2014, 55 percent ($25.8 million) came directly from individual donor countries, led by Norway, which committed $17.6 million. Just over 30 percent ($14.5 million) of committed finance has been paid out.

“Norway’s pledge of up to $150 million to support REDD+ in Liberia through 2020 sends a strong signal to the Liberian government to take the bold actions required to protect the country’s forests,” Forest Trend’s Schaap said in a statement. 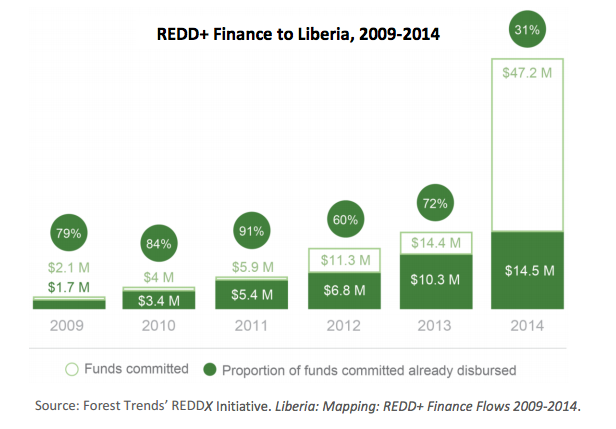