Norway and several European Nations, along with the United Nations and the World Bank, today committed to a new initiative that takes aim at the underlying causes of deforestation in Central African rainforest nations, including poverty and poor governance. And in an unprecedented step, Brazil will lend its expertise to effort.

While tens of millions of dollars have already been plowed into the six African countries to help with the development of so-called REDD+ (Reducing Emissions from Deforestation and forest Degradation) programs, CAFI goes beyond that initial stage by taking a more holistic approach that targets drivers of deforestation through national investment funds. Those funds will be distributed via a U.N.-managed trust fund that will be supported by a range of donors led by Norway, which had pledged up to $47 million a year through 2020.

“Through the Fund and parallel support, donors will be able to deliver multi-year, country-based development funding more efficiently and predictable,” said UNDP in a statement.

“Tonight Central African governments stand ready to confirm their commitment through high-level investment frameworks spanning all the sectors behind the loss of forests while development partners commit to further financial resources and the alignment of their assistance,” explained UNDP Administrator Helen Clark via the statement. “It will bridge a huge funding gap and concentrate financial assistance in a region that thus far has not benefited from the same amount of funding as other forested regions.”

Beyond financial support, the initiative is capitalizing on Brazil’s experience in dramatically curbing Amazon forest loss over the past decade. Brazil will specifically support “capacity building, knowledge sharing and expertise in the implementation of policies” in the six African nations.

CAFI comes at a critical time for Central Africa’s rainforests. According to data presented on Global Forest Watch, the rate of tree cover loss in DRC, Gabon, Cameroon, Equatorial Guinea, the Central African Republic and the Republic of Congo has sharply risen over the past decade, topping a million hectares in 2013 and 2014. Meanwhile data from the U.N. Food and Agriculture Organization (FAO) suggest that logging of old-growth rainforests in the region has accelerated since the 1990s, especially in Gabon and DRC. 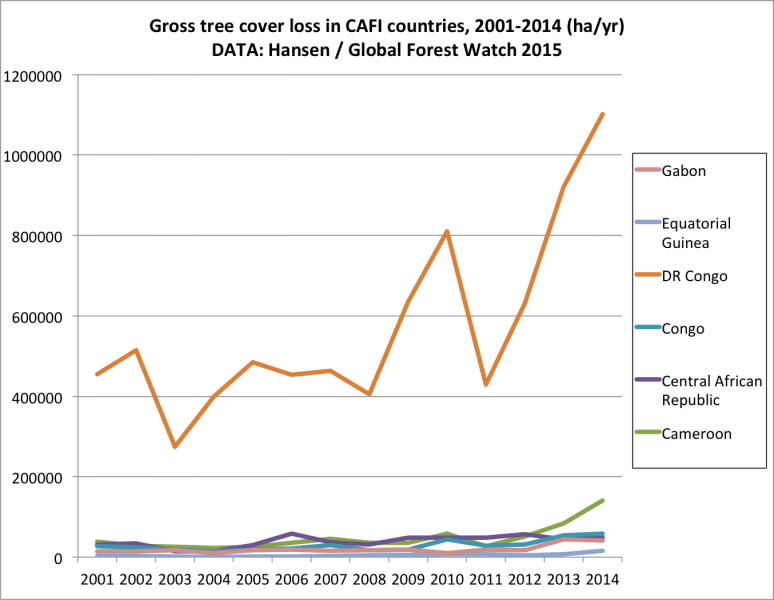 Deforestation in the region — which holds the second largest tropical forest after the Amazon — is primarily driven by subsistence agriculture, charcoal and fuelwood production, industrial agriculture, mining, and logging.