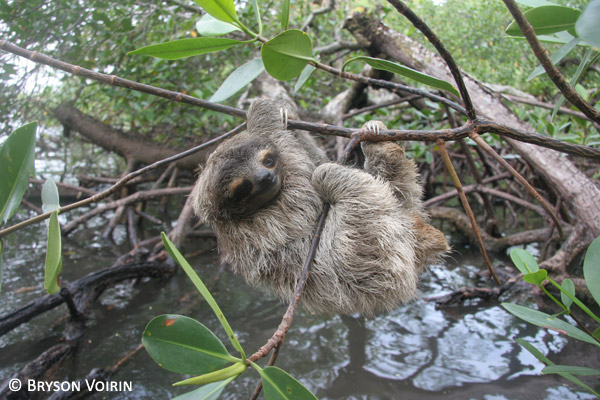 There may be more pygmy sloths than believed, according to a new paper in the Journal of Mammalogy. Scientists originally estimated a population of less than 500 pygmy sloths (Bradypus pygmaeus) on Escudo de Veraguas Island off the coast of Panama, the only place in the world where these diminutive sloths survive. But the discovery that these sloths inhabit the interior of the island—and not just the mangroves ringing the edges—means there could be as many as 3,200 sloths on the small island.

“The actual population size is most likely somewhere between these two—perhaps 500 to 1,500 individuals,” said lead author and sloth expert, Bryson Voirin with Germany’s Max Planck Institute of Ornithology. “In any case, this is extremely small number for an entire species.”

Placing radio collars on ten sloths, Voirin found that the majority roamed beyond the mangroves where they were first discovered. In fact four of the sloths ventured 200 meters inland during the time they were collared.

At only 430 hectares, Escudo de Veraguas Island is a small island and the pygmy sloths remain Critically Endangered. However, this new information means they may be slightly further from extinction than feared.

To save the sloths, Voirin said that the Panamanian government must raise the protection status of the island, which is currently a part of the indigenous area, Ngäbe-Buglé Comarca.

“Declaring the island a wildlife refuge or national park would protect not only the pygmy sloths, but also the other unique species found on the island,” he noted. The island is also home to a unique species of hummingbird and bat.

Currently, the island is largely uninhabited by people, but fishermen often camp there for the night and cut down trees for firewood, reducing sloth habitat. Moreover, there have been proposals to develop the island into a tourism destination, including an airstrip, casino, marina and hotel.