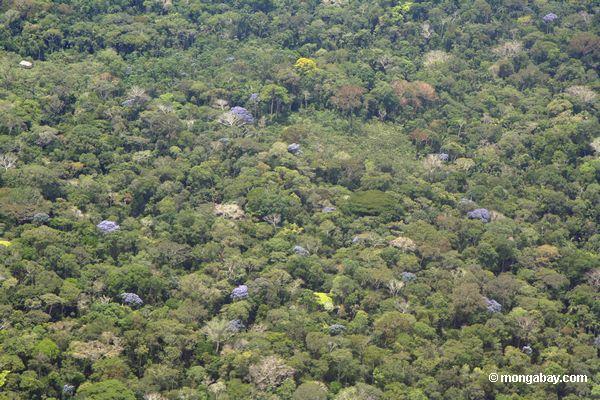 The Amazon rainforest might seem like a massive expanse of monotonous green. However, a recent study has found that within this monotony lies a kaleidoscope of chemicals unique to all the different plant species of the forest.

Every year since 2011, the Carnegie Airborne Observatory (CAO) – an airplane loaded with advanced sensors of various kinds – has flown over the vast Peruvian Amazon, picking up minute details about the forest. The sensors detect the three-dimensional structure of the forest, various chemicals contained within plant leaves, and the terrain below the thick Amazonian canopy.

By analyzing the sensors’ measurements, researchers from the Carnegie Institution for Science have found that lowland Amazonia holds a rich diversity of plants, represented by a large spatial variation in the portfolio of their chemical traits like chlorophyll, cellulose, nitrogen and many other macronutrients that plants require in large amounts.

“This is the first time that so many chemicals have been measured and mapped in any forest ecosystem on Earth,” Gregory Asner, researcher at the Carnegie Institution for Science, and lead author of the study published in Nature Geoscience, said in a press statement. “No one has done the mapping we have achieved here, which enabled a discovery that the lowland Amazon is anything but monotonous or similar everywhere.”

What do these plant chemicals tell us? Each of these chemicals have important functions within the plant – for example, some chemicals are involved in carbon-fixation and photosynthesis, while others help build cells, regulate the growth of the plant and defend it. 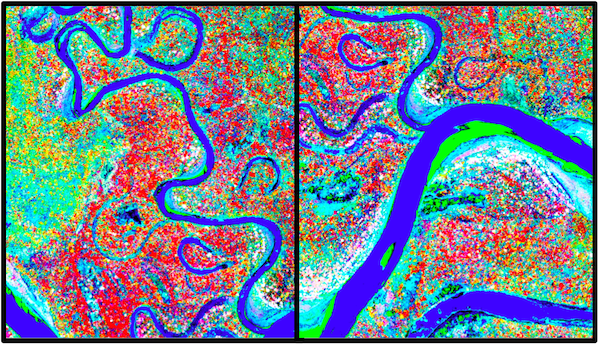 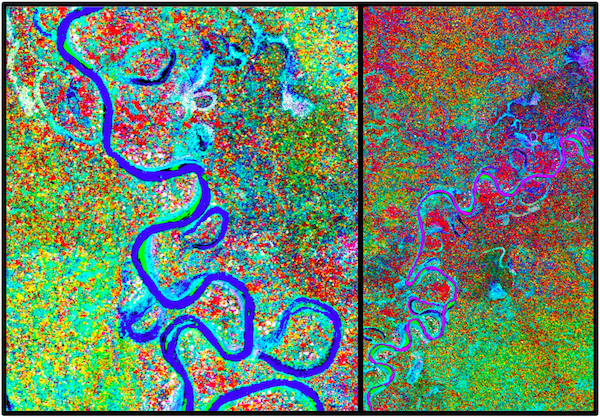 These Carnegie Airborne Observatory (CAO) images reveal Peruvian floodplain forest canopies in red that are naturally packed with growth chemicals, as compared to forest canopies on neighboring terraces in yellow-green that are outfitted with fewer growth chemicals. These images explain the geographic pattern of carbon dioxide uptake in the lowland Amazon, and help to predict forest responses to climate change. Images courtesy of Gregory Asner, Carnegie Institution for Science.

“So the best way to know a plant is through its chemistry,” Asner told mongabay.com. “It’s like when you go to the doctor and they can tell you a whole lot from your blood. Similarly, we can look at the chemical portfolio of a plant and tell a lot about its past growth, its future growth and its evolutionary history.”

In fact, by using information about the assortment of chemicals in plants, Asner’s team can identify individual tree species. The variation in plant chemistry across a forest can then provide clues to how the plant communities function, and their survival in the future.

However, very little is known about the spatial distribution of the plant chemical traits in tropical regions like lowland Amazonia, the authors write in the paper. And this is where the CAO and its sensors have a role to play.

One crucial instrument aboard the CAO is the high fidelity imaging spectrometer, which detects sunlight reflected from the surface of the plants in the forest. The sensors are capable of detecting 480 different wavelengths of the reflected light simultaneously, from ultraviolet to short wave infra-red. “And embedded in that signal is the chemical information about a plant,” Asner explained.

The laser sensors on the CAO scan the forests in ultra-high definition 3D, he added, so that you can see individual leaves and branches. Moreover, the CAO laser sensors can also see past the thick vegetation and map the terrain below.

Starting in 2011, Asner and his team of pilots would fly over the Peruvian amazon for several months in a row, at an altitude of 2,000 meters above ground level, scanning the forest and mapping about 250,000 individual trees or more in a minute. In doing so, the sensors picked up patterns at scales that would have been otherwise difficult to perceive. For instance, the sensors detected a large spatial diversity in the plants’ chemical traits.

Mapping individual trees helped us see the grander, bigger patterns emerge, Asner said. “And that is super exciting. We were just jumping around in the lab. It was an amazing feeling to see this pattern that nobody had seen before.” 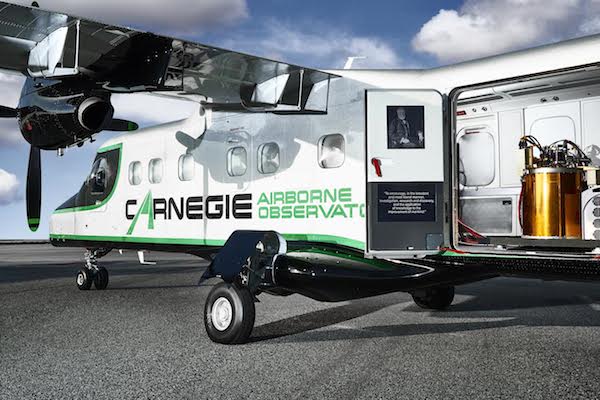 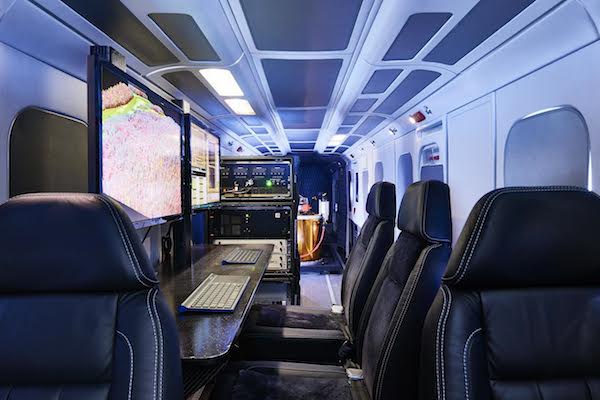 One of the patterns their analyses revealed, for instance, was that the terrain below the forest canopy was closely linked to the plant species. In fact, very small changes in the topography – only a few centimeters to a couple of meters – was enough to make the forest change, according to Asner. Moreover, the chemical traits in plants varied depending on their position along the two rivers—the Madre de Dios River and the Tambopata River.

“These changes are almost undetectable on the ground,” he added. “In the field when you’re walking up a little hill, it just looks like the amazon forest around you. You do not detect a change in the biology. But you can see most of the changes from the air.”

Similarly, swamp forests, occupying regions of western Amazonia, have very unique chemical portfolios due to the highly anoxic conditions of the soil.
So the tree species, over evolutionary time, have become hyper-specialists in the different microenvironments that occur within the Amazon forest, Asner said.

Asner thinks this is because plants in the Amazon face intense competition for space. The nutrients are not uniformly distributed in the soil, he said. “And I predict strongly that the microterrain is associated with the soil nutrients, and that plants over a long period of time have become specialized in utilizing a special combination of these soil nutrients.”

Asner’s team is now reworking the spectrometers to make them detect more number of plant chemicals. “In particular, we want to detect more chemicals that tell us about how well plants resist climate change, especially drought,” he said.

A bird’s eye view of the chemical variation and the plant species contained within tropical forests, such as those produced by Asner’s team, can help guide conservation and management actions too. For example, it can help assess whether protected areas within Peru have an ecological basis.

“In the lowlands of the Amazon, protected areas are just put down on the map politically, and not ecologically,” Asner said. “But you risk not protecting something unique and important that we just don’t know about it yet.

“So if you had a map of the Amazon which told you about all the Amazon communities and species, which we do for Peru now, would the current portfolio of protected areas protect 10 percent of the different communities that we now know exist? I don’t have an official answer yet.”

But Asner’s team is trying to figure this out.