Warning: Some images in this story contain graphic content. 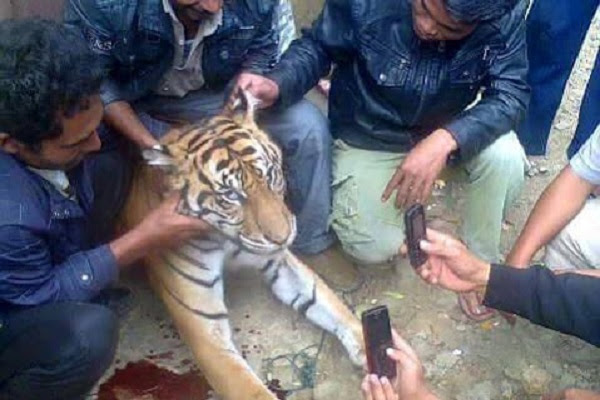 Residents of the Indonesian village of Sibide pose with a dead Sumatran tiger, a critically endangered species. Pictures of the photo session sparked a public outcry when they were posted to Facebook in February. Photo: Backpacker Nusantara

The Indonesian government has promised to crack down on the growing number of people showing off dead or abused endangered animals on social media.

Several cases have received national attention. In February, residents of the Sumatran village of Sibide posted pictures to Facebook of themselves posing with a dead Sumatran tiger (Panthera tigris sumatrae), whose dwindling population in the wild amounts to no more than a few hundred.

A few months later, a man in Central Kalimantan province uploaded gruesome shots of himself barbecuing an endangered Borneon orangutan (Pongo pygmaeus) in a makeshift, outdoor fire pit to eat for dinner, also to Facebook.

In the latest high-profile case, a prospective civil servant named Novtamaputra posted a photo to Instagram of himself with an endangered proboscis monkey (Nasalis larvatus) he had killed while hunting. The image went viral, and following a public outcry Novtamaputra deleted the picture and posted an apology.

All three cases have been widely condemned in Indonesia, but only the orangutan case has been pursued by law enforcers. 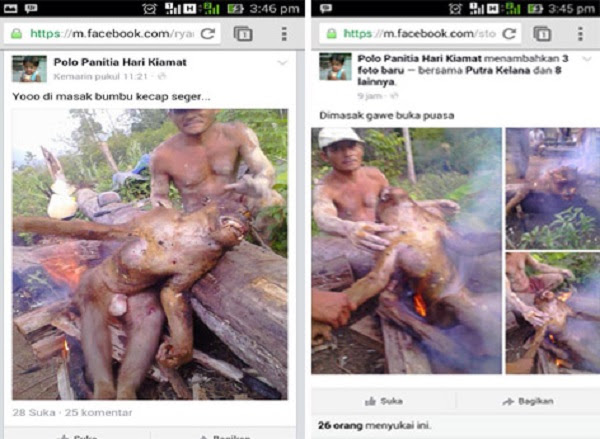 A resident of Indonesia’s Central Kalimantan province barbecues an endangered Bornean orangutan for dinner. Authorities moved to arrest the man after he posted the photos to social media. Photo credit: Facebook

Blood stains a man’s hands as residents of Indonesia’s Sibide village pose for pictures with a critically endangered Sumatran tiger. Only several hundred of the creatures still exist in the wild. Photo: Backpacker Nusantara

Illegal animal traders have also taken to social media. Authorities in the port city of Surabaya, a hotbed of wildlife trafficking, for example, recently arrested a man selling rare eagles on Facebook.

He also warned that boasting about killing endangered animals would carry consequences.

“Go ahead and post on Facebook to brag to your friends,” he said. “It will make it easy to track down and arrest you.”

Even when perpetrators of wildlife crimes are prosecuted in Indonesia, they often receive less than the maximum penalty. Last year, the country’s Natural Resources Conservation Agency (BKSDA) decided to take action against a lecturer from a notable university in North Sulawesi province who had gloated about killing an endangered Celebes crested macaque (a member of the same species, Macaca nigra, as the macaque that took last year’s famous “monkey selfies“).

The police have since arrested four people with 12 dead macaques and three living ones as evidence. But while the prosecutor requested a sentence of five years in prison and a Rp100 million ($7,508) fine, the offenders were only ordered to spend one year behind bars and pay Rp40 million. 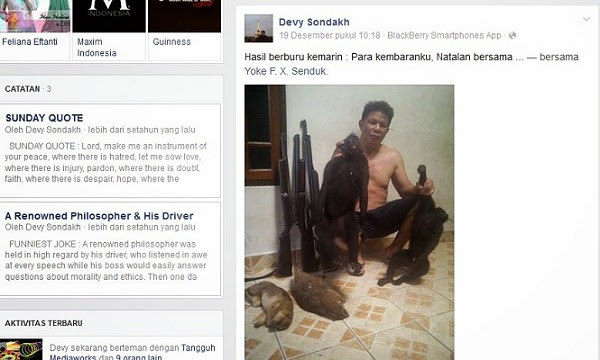 An Indonesian lecturer was prosecuted by the authorities after posting to Facebook pictures of endangered macaques he had killed. Photo: Facebook

Push to change the law

To fight wildlife crimes – perhaps as smartphones and the Internet have made the issue more visible – the Environment and Forestry Ministry says it intends to strengthen the 1990 Conservation Law.

“It has been 25 years and things have changed,” Sani said. “It’s time to amend the law.”

The House of Representatives (DPR) and President Joko “Jokowi” Widodo’s administration both say they are committed to completing the revision in 2016.

She said she hoped the revised law would allow for the arrest of perpetrators whether or not actual wildlife could be seized as evidence.

“We are also pushing for the Information and Electronic Transaction Law to be revised to include online wildlife trading, instead of just focusing on defamation cases,” she added.

“We need to revise the law because it’s clear that a lack of monitoring and less punishment is causing these crimes to continue to happen,” Mauladi said, referring illegal wildlife offenses as “extraordinary crimes.”

Mauladi pointed out that local people who commit wildlife crimes might not be aware an animal is protected or might need the money from selling it.

“They might be uneducated and unsocialized,” he said. “So don’t blame them because it’s the government’s responsibility to educate people and conserve wildlife.”

Behind poachers, he added, are “well-organized criminal networks. We need to investigate the structure of the trade. It’s not fair to punish common people.”

But Hermawati said people who post on social media know the animals they’re showing off, especially the orangutans, are endangered.

“Those people are hunters and know it’s forbidden,” she said. “It has been 25 years [since the 1990 Conservation Law], I am pretty sure campaigns are everywhere. So saying sorry is not enough. It does not end by apologizing, there should be legal action. Officials should track and arrest them.”

She called wildlife trafficking a national emergency and encouraged Jokowi to issue a decree on it.

“We arrest wildlife traffickers wanted by Interpol [the International Criminal Police Organization]. So it is not national issue anymore, it’s international,” she said.