Countless lives have been saved by antibiotics since the middle of the 20th century. But their life giving potency is fading fast as bacterial resistance surges. Last year the United Nations declared the problem a “serious threat” to global health.

Recently, however, a new study published in Nature revealed the discovery of a resistance-proof antibiotic, marking a possible milestone in the fight against infectious disease.

Around 500,000 deaths are attributed globally to antibiotic resistance annually. That toll could rise to ten million by 2050 if current rates of resistance continue and no viable alternative antibiotics are found, according to the U.K government Review on Microbial Resistance.

Widespread and indiscriminate use of antibiotics by large-scale corporate agriculture and in the food industry is considered a significant factor in the rise of resistance in recent years. Antibiotic effectiveness for the treatment of infections has also declined due to overuse and improper application among the general populace, allowing bacteria resistance to strengthen.

“Without urgent, coordinated action by many stakeholders, the world is headed for a “post-antibiotic era, in which common infections and minor injuries which have been treatable for decades can once again kill,” said Dr Keiji Fukuda, the World Health Organization’s Assistant Director-General for Health Security.

In an effort to turn the tide on antibiotic resistance, a team of scientists from NovoBiotic Pharmaceuticals and Northeastern University have uncovered a potential goldmine of drug interventions lying just beneath our feet. There they found a fascinating resistance-proof antibiotic, which they named teixobactin – in a patch of dirt in Maine.

Mining the earth for antibiotics

Until recently, new drug discoveries were confined by research into only about 1 percent of all bacteria – the kind that grows happily in the lab. And that’s where all the antibiotics found in pharmacies and hospitals today were discovered. By the 1960s however, there was little left to find, as the cache of lab cultivatable soil micro-organisms had been exhausted. This brought the first era of antibiotic discovery effectively to a close, and few antibiotics have made it out of the lab since.

Study lead scientist Kim Lewis and his team wanted to exploit the remaining 99 percent of uncultured bacteria found in soil, the kind unused by scientists due to their stubborn reluctance to grow under laboratory conditions. To overcome uncultivated bacteria’s obstinacy, they needed to bring the natural environment into the lab, but to do that they needed new technology.

Enter Lewis and Slava Epstein. They worked alongside a team of technicians for several years to find a way to cultivate the 99 percent of natural soil bacteria that exists only in nature. By 2002, they succeeded, but a major problem remained: all the species of soil bacteria were all in a mash. To study individual strains, they would need to find a way to isolate a single bacterium from the rest, then nurture it under natural conditions.

Thus was born the iChip.

The ichip was the answer. It is a small, simple device, and takes only about five minutes to assemble. A single soil bacterium – one which scientists want to cultivate – is placed inside one of many ichip “wells” behind a thin porous membrane. The openings in the membrane are big enough to allow nutrients and water to pass through, but small enough to trap the bacterium inside, isolating it and preventing it from mixing with other bacteria. The whole ichip is then placed back in its natural soil environment, where the bacterium can now be successfully grown and its antibiotic properties studied. 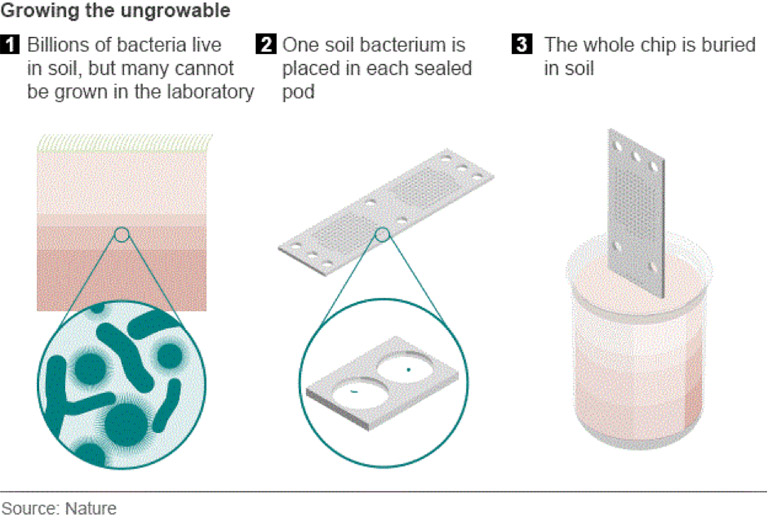 The ichip has already allowed 10,000 previously uncultivated bacteria to be isolated and screened for their antibiotic properties. One which caught the eye of researchers early on was teixobactin – a pretty big fish to catch, says science writer Ed Yong. “Teixobactin is a fish; the iChip is the rod. Having the rod guarantees that we will get more fish – and we desperately need more.” Researchers hope that the ichip will help add new effective drugs to society’s currently faltering antibiotics arsenal.

Teixobactin is a particularly exciting discovery, the researchers say, because it has developed a cunning method of defying bacterial resistance. Unlike other microbes that target only one area of cell wall on a pathogenic bacteria, teixobactin binds to multiple targets and easily attaches to several spots on the outside of the cell. This deadly one-two punch limits the opportunity for successful resistance to develop.

Teixobactin has been shown to be a uniquely efficient killer of several drug-resistant pathogens in animal testing. Infectious bacteria such as the MRSA bug, clostridum dificile – a diarrhea-causing “staph” bacteria that has become resistant to many common antibiotics – is highly susceptible to teixobactin. So are the bacteria responsible for anthrax and tuberculosis.

The new drug works by binding to Lipid II (which bacteria need to make thick cellular walls) and Lipid III (which stops existing cell walls from breaking down). Teixobactin withholds both lipids from the pathogenic bacteria. In doing so, it frees autolysin, an enzyme that inhibits the breakdown of a cell, leading to uncontrolled hydrolysis in the cell wall, causing the pathogenic bacteria to burst and die. No new bacteria can form in the presence of the drug.

It’s the unusual targeting ability that provides teixobactin with its distinctive resistance. “Most antibiotics… bind to only one target” Dallas Hughes, President of NovoBiotic Pharmaceuticals, told mongabay.com. “Teixobactin binds to two targets, so both targets would need to be altered [by bacterial mutations] for resistance to occur, and this is highly unlikely,” Hughes said. “In addition, teixobactin binds to a nonpeptide region of its targets, so conventional resistance via amino acid sequence mutation cannot occur.”

This does not mean resistance to teixobactin will never develop, in fact it almost certainly will at some time in the future. But it will develop slower than with past antibiotics. “We predict resistance to take at least considerably longer to emerge than with other antibiotics,” said Brian Conlon of Northeastern University and a member of the research team.

The authors compare the new drug to the antibiotic vancomycin, widely used for bacterial infections. Once it was medically available, it took 30 years for vancomycin resistance to develop. Teixobactin will likely take even longer for resistance to appear, given its distinctive and novel mechanisms of action.

It will take several years until teixobactin is ready for human trials. When it is finally approved for use by hospitals and doctors, it must be prescribed judiciously and used properly, say the scientists. Otherwise, overuse and inconsistent use will hasten resistance formation among disease-causing bacteria and viruses.

“As with all antibiotics, the controlled prescription for appropriate cases will reduce the risk of resistance development,” Conlon states.

The value of teixobactin as an antibiotic is significant. But its promise may be far surpassed by the value of the novel method used to discover it. The iChip has provided a key to a treasure trove of potential new antibiotics; no one can guess what wonder drugs might be found in the 99 percent of bacteria previously locked away by nature. The ichip’s invention may delay the much feared post-antibiotic era for years, or even decades, to come.