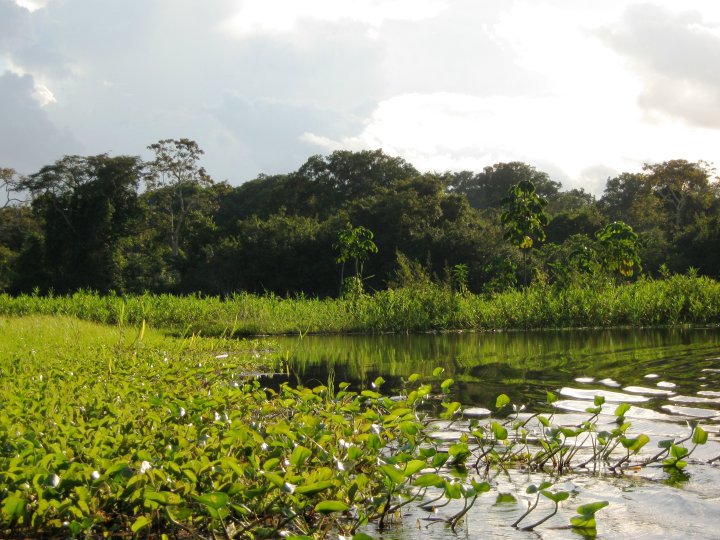 Forest near Iquitos, close to where the new reserve is. Photo by Morgan Erickson-Davis.

A tract of Peruvian rainforest bigger than California’s Yosemite National Park is officially more protected, with formal declaration of the Maijuna-Kichwa Regional Conservation Area (RCA) made last week in Lima. Those involved with the reserve’s formation hope it will safeguard the area’s biodiversity as well as the ancestral homeland and way of life of local indigenous communities.

Northeastern Peru, sandwiched between Ecuador, Colombia, and Brazil, still has large tracts of forest untouched by major human development. The Amazon Basin begins here, the area serving as the confluence of tributaries draining water off the Andes into the Amazon River near Iquitos – the largest city on earth not connected by road to the outside world. The region’s forests contain vast biodiversity, as well as resources for indigenous Maijuna and Kichwa communities that comprise about 4,500 people.

“We have seven headwater basins within the reserve, and wildlife zones that serve as a refuge for the many animals that live in this environment,” said Romero Rios, President of the Maijuna Indigenous Federation. “These forest resources are our market source, as we have medicinal plants and trees. These resources will sustain us.”

However, while much of northeastern Peru’s forests remain intact – especially compared to downstream areas where agricultural activities are more intense – recent developments have targeted the area. The Monitoring of the Andean Amazon Project (MAAP) recently made public evidence of increasing road networks near Cordillera de Azul National Park. And a massive cacao plantation appeared near Iquitos in 2013, cut largely from primary rainforest.

Creation of the Maijuna-Kichwa RCA puts in place official protection of 977,600 acres of forest (1,528 square miles or 3,956 square kilometers) in the department of Loreto near the Colombian border. The decree calls for the National Service of Protected Natural Areas by the State to supervise and protect the area, and includes natural resource usage requirements. However, these requirements do not extend to timber harvesting. 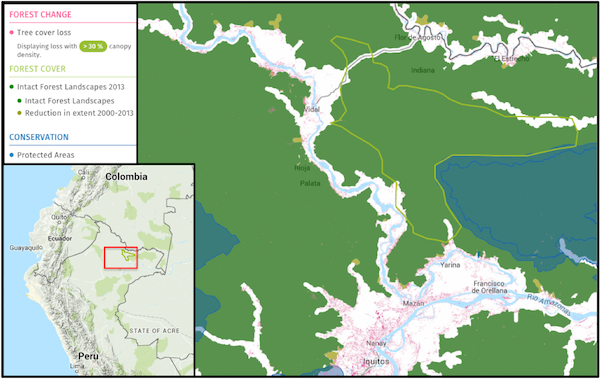 The new Maijuna-Kichwa Regional Conservation Area (approximate location and extent outlined in light green) is comprised of mostly intact forest landscapes – forested areas large enough and undisturbed enough to retain their original biodiversity – and abuts the existing Ampiyacu Apayacu Regional Conservation Area. While nearly 30,000 hectares (74,000 acres) of tree cover was lost between 2001 and 2014, according to Global Forest Watch, relatively little of that occurred in the area designated for the new reserve. Map courtesy of Global Forest Watch. Click to enlarge.

Work towards the Maijuna-Kichwa RCA began in 2006, when Maijuna representatives sent a petition to then-Regional President of Loreto asking for the authority to manage their ancestral land. Since then, it’s been a joint effort led by the Federation of Native Communities Maijuna, the Federation of Native Communities from Mid-Napo, Curaray and Arabela, and the Regional Government of Loreto. Nature and Culture International (NCI) also contributed significantly to the formation of the reserve, as did many other NGOs in Peru and abroad.

“Together we have worked on activities for the sustainable management of the forest and the aguaje palm swamps,” Rios said. “We are managing several aguajales areas, monitoring and understanding the productivity of these palms, mapping the extension of aguajales that we have, and recognizing the young species that require more care from us. With NCI, we have also worked on a turtle breeding project and in the use of chambira palm fibers.”

Studies have shown that local communities tend to be very effective at managing land. For example, Brazil’s community-held forests have deforestation rates 22 times lower than outside areas; in Mexico’s Yucatan, community forests show 350 times less deforestation. These forests show even less deforestation than areas solely managed by governments. But this ability to curb forest loss only works when communities have the legal rights to their forests. And now, Peru’s Maijuna and Kichwa communities have those rights.

“With the recognition of the Maijuna-Kichwa reserve by the national government we feel that the doors have been opened,” Rios said. “Before we were saying that we had to look through a little window as we could not make any progress toward our goals. Now with this open door, we feel we can propose future projects for the development of the Maijuna and Kichwa people to improve the livelihood our populations, not only to benefit our own people but also for the benefit of the entire Loreto region.”