by Mrinalini Erkenswick Watsa on 26 May 2015 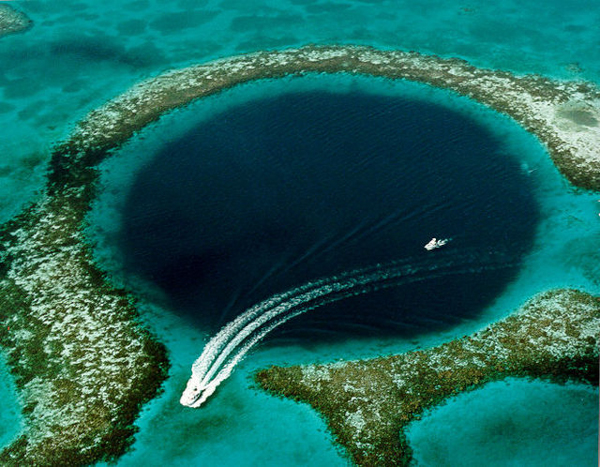 Belize’s Great Blue Hole, part of a UNESCO World Heritage Site that would be included in areas opened to oil and gas drilling under a new proposal from the Belizean government. Photo credit: U.S. Geological Survey.

The government of Belize has proposed opening up most of the country’s marine area, including seven areas comprising a UNESCO World Heritage Site, to offshore drilling for oil and gas, according to the Associated Press. Belize currently has a voluntary moratorium on any such drilling.

Conservation groups have strongly opposed the proposal, which could grant petroleum concessions that overlap with marine protected areas, such as seven located on the Belize Barrier Reef, the second largest reef in the world. The area that would be opened to drilling includes the Great Blue Hole, part of the UNESCO World Heritage Site listed by Jacques Cousteau as one of the world’s top ten scuba diving locations. Common residents of the 300-meter (984-foot) wide and 124-meter (407-foot) deep submarine sinkhole include Caribbean reef sharks (Carcharhinus perezii), midnight parrotfish (Scarus coelestinus), and bull sharks (Carcharhinus leucas).

“By any measure, both the exploration and any sort of accident that might happen could damage the fishing industry as well as the tourism industry,” Lawrence Epstein, the Mesoamerican Reef program manager for the conservation group the Environmental Defense Fund, told the Associated Press.

Myriad sea creatures living in the reefs would be adversely affected by offshore drilling, activists say. And even exploratory drilling can introduce mud into ecosystems, while seismic testing can disrupt dolphin communication and foraging via sonar, Janelle Chanona, vice president of operations in Belize for the international marine conservation group Oceana, told the Associated Press.

At nearly 14,000 square miles, the total marine area of Belize is just under one-sixth the size of the 80,000 square miles closed to fishing as a result of the 2010 oil spill in the Gulf of Mexico, the effects of which are still being felt by marine creatures in the vicinity. Even a comparatively small oil spill could imperil Belize’s white sands and clear waters that are the very foundation of its tourism industry, which accounts for 30 percent of the country’s employment, according to the website of Oceana, which has been working against offshore drilling expansion in Belize.

Epstein told the Associated Press that 5 percent of Belize’s population of 340,000 depends on fisheries for their livelihoods, and could be at risk from the new proposal.

In 2012 Oceana held what it billed as a “Peoples’ Referendum” using more than 50 polling stations across Belize. Ninety six percent of the nearly 30,000 Belizeans who voted categorically opposed offshore drilling, according to the group.

In July 2014, UNESCO’s World Heritage Committee decided to keep the Belize Barrier Reef on its List of World Heritage in Danger, but they warned Belize’s government that any future oil drilling in or near the site would be incompatible with World Heritage status.

Chanona told the Associated Press that Oceana has sent a report of its concerns to the government. While she said officials agreed to consider the report in their decision, Belize’s track record somewhat belies its credibility in this regard. In 2013, the Guardian reported that a 2,300-year-old Mayan pyramid was irrevocably damaged to extract rock for a road-building project, and Mayan sites are routinely damaged for road fill across the nation.