Peatlands around the world are drying and burning as humans drain them and the climate changes; scientists urge protections.

A peat forest burns in Riau, Sumatra. Photo by Rhett A. Butler.

When we think of fire, bright yellow and orange flames may come to mind. But in some areas, a very different type of fire exists: a flameless fire, which can persist even when there is moisture moisture and low oxygen. Called “smoldering combustion,” these fires last for weeks, sometimes months. They transfer more heat to surrounding plants, use up to twice the amount of fuel as flaming fires and damage plant roots and associated microbes. They also spew carbon that had been trapped for millennia into the atmosphere.

A new study published recently in Nature Geoscience warns of the consequences of increased smoldering fires as peatlands are drained to make land for agriculture, or dry up due to climate change.

Peatland being drained and cleared in Indonesian Borneo. Photo by Rhett A. Butler.

The carbon content of peatlands is extremely high, as one would expect given the slow rates of decomposition. “Peatlands cover only about 2–3% of the Earth’s land surface but store around 25% of the world’s soil carbon,” write the authors. Peatlands are more abundant in the northern latitudes, but a large proportion – 60 percent – is found in Southeast Asia.

Overall, according to the study, peatlands store an amount of carbon comparable to the entire atmospheric load.

The study states peatlands have in fact been acting as a global cooling agent, because they are a sink for atmospheric carbon dioxide. Undisturbed peatlands are carbon dioxide neutral: released carbon is quickly re-sequestered by recovering vegetation. Normally, they are protected from smoldering by a relatively high water table. In the tropics especially, high rainfall and humidity maintain high moisture in peatlands, making fires rare and allowing peat to build up.

With climate change and human activities such as deforestation and draining for agriculture and road-building, peatlands around the world have dried up. Reduced tree coverage may lead to lower humidity levels and a build-up of dry, flammable fuels, precipitating more fires, the authors write.

In North America, for instance, the authors write that the area under peat fires has more than doubled in the last decade. They attribute this increase largely to regional warming and draining for forestry, agriculture, peat harvesting and road construction.

“The regions where ecosystems are most vulnerable to peat fires are [thawed] permafrost soils in Alaska and Siberia. These soils have not been exposed to fire in milennia but warming is making them susceptible to smouldering combustion,” coauthor Guillermo Rein from the Imperial College London told mongabay.com

Down south in the tropics of Southeast Asia, fires consumed peat up to a depth of as much as 50 centimeters (20 inches) during the El Nino-Southern Oscillation weather anomaly in 1997-98 and 2006.

“The widespread and deep-burning peat fires in Indonesia in 1997 and 1998 released approximately 0.95 [gigatons] of carbon, equivalent to ~15% of global fossil fuel emissions at that time,” write the authors.

According to co-author Merritt Turetsky, coauthor of the study, a shift in vegetation is observed when peatlands are drained.

“In northern peatlands drainage increases the amount of woody fuels, which increases fire risk. In tropical peatlands, drainage can cause vegetation to shift towards grassy species that burn more readily than native vegetation,” Turetsky told mongabay.com.

This greater fire risk can be seen in Indonesia. Ten percent of the country’s land area should be made up of peatlands, but due to logging, draining, and other human pressures, less than half still exist — and of those, only 10 percent are still pristine. Data from Global Forest Watch Commodities shows that areas where there were peatlands in Riau, Sumatra in 2002 are now hosting nearly all of the of the province’s fires. 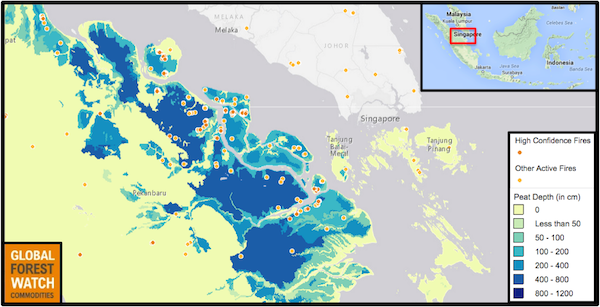 Most fires in Riau, Sumatra occur on peatlands. Analysis from Global Forest Watch Commodities showed 241 fires were burning in Riau as of March 10, 2015. The map shows the location of fires burning between March 2 and March 9, 2015. Click to enlarge.

In addition to adding to global warming through carbon emissions, peat fires can be detrimental to human health. Smoke creates haze and can lower air quality even far away; in 2013, Singapore and Malaysia asked the Indonesian government to take “urgent measures” to address the Sumatran fires that routinely make their air pollution indices top out well above healthy levels. According to the studies, smoldering combustion releases more noxious substances than does flaming combustion, producing high levels of carbon monoxide, methane, volatile organic compounds, polyaromatic hydrocarbons and particulate matter.

The authors expect smoldering peat fires to only increase as peatlands are drained and cleared, and as the climate warms. And when they do happen, they may be hard to beat.

“We should expect more peat fires in the future,” Rein said. “Because of the easy ignition and difficult suppression, smouldering peat is the most persistent type of combustion phenomena on Earth. Smouldering fires burn for very long periods of time (e.g., months, years, decades) despite extensive rains, weather changes and fire-fighting attempts.”

Scientists believe a solution may lie foremost in the preservation and protection of peatlands.

“In addition to minimizing deforestation and reducing peat swamp drainage as a mitigation approach, perhaps awarding carbon credit for preserving peat carbon store, rather than drainage for crops, may be a mitigation strategy,” Zicheng Yu, a paleoecology and paleoclimatology professor at Lehigh University in the U.S. who wasn’t affiliated with the study, told mongabay.com.