Pollinator collapse could lead to a rise in malnutrition 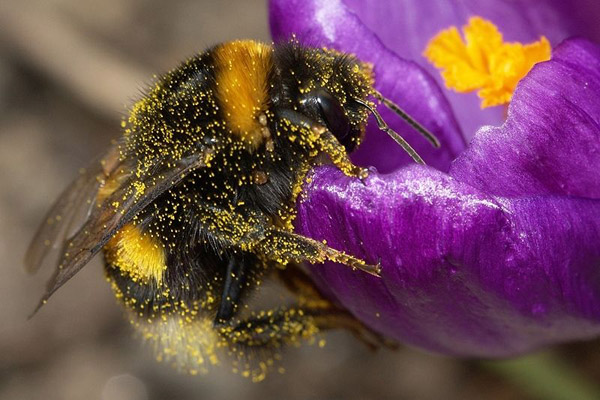 Saving the world’s pollinators may be a public health issue, according to recent research from Harvard and the University of Vermont. Scientists have long believed that pollinators are important for human nutrition, but this is first time they have tested the hypothesis. What they found is disturbing: pollinator collapse could increase nutrient deficiency across local populations by a up to 56 percent in four developing counties, with Vitamin A the most vulnerable to pollinator decline.

“Populations of both managed and wild pollinators are declining around the globe, and the importance of pollinators to farm productivity and economics is increasingly clear,” the researchers write in the open-access paper in PLOS ONE.

By pollinating a huge number of important crops, the world’s pollinators—like bees, butterflies, wasps and others—play an outsized role in global food production and nutrient production. As the researchers write, “recent studies have estimated that pollinators are responsible for up to 40 percent of the world’s supply of nutrients.”

In order to test the belief that declining pollinators will impact rates of malnutrition, the researchers began by studying the intake of five important nutrients—vitamin A, zinc, iron, folate, and calcium—in young children and women in Zambia, Bangladesh, Uganda, and Mozambique. Meticulously interviewing families about their eating habits over 24 hours, the researchers were able to estimate how much people in these developing countries depend on pollinators for each nutrient.

The researchers found that while results varied across countries, Vitamin A was the most dependent on pollinators. Folate—which is especially important for pregnant women—came in second.

For example, without pollinators the percentage of young children suffering from Vitamin A deficiency in Mozambique would jump by 56 percent. In Uganda, it would rise by 15 percent. Folate was also a large issue for Mozambique as well: without pollinators, women and young children suffering from a lack of folate would rise by 28 percent.

“The take-home is: pollinator declines can really matter to human health, with quite scary numbers for vitamin A deficiencies, for example which can lead to blindness and increase death rates for some diseases, including malaria,” said co-author, Taylor Ricketts with the University of Vermont. It’s believed that Vitamin A deficiency can double the risk of death due from malaria as well as diarrhea and measles. Moreover, expectant mothers with Vitamin A deficiency are 4.5 times as likely to die in childbirth. Currently, experts estimate that Vitamin A deficiency plays a role in 800,000 mothers and children every year.

The research also found that local conditions were really important to understanding how the decline of pollinators might impact malnutrition. For example, the study found little impact in Bangladesh—but largely because the region studied already suffered widespread malnutrition. In other cases, people depended on very specific, locally-grown crops for certain nutrients, some of which are not tracked by global commodity chains.

“Ecosystem damage can damage human health,” Ricketts noted, “so conservation can be thought of as an investment in public health.”

While the collapse of bee populations has garnered the most media attention, research has shown that all kinds of pollinators are at risk of collapse and many are in decline. Researchers have pointed the finger at disease, habitat loss, and pollution. But, ehen it comes to bees, a significant portion of research points towards pesticides, especially neonicotinoids.