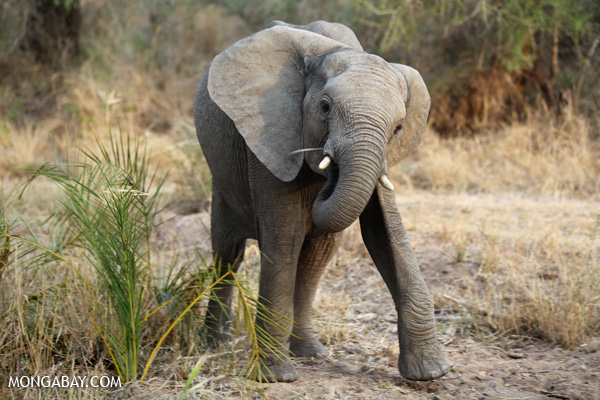 Elephant in South Africa.. Photo by Rhett A. Butler.

China has established a one-year ban on imports of carved African elephant ivory.

“This announcement is an encouraging signal that the Chinese government is ratcheting down the import of African elephant ivory into the country,” said Iris Ho, director of wildlife for Humane Society International, in a statement. “We are hopeful that more meaningful actions are being considered by the leadership and relevant government agencies of China that will further strengthen the country’s efforts on combating the elephant poaching and ivory trafficking crisis. We also encourage China and other countries to permanently ban domestic ivory trade and destroy all confiscated ivory stockpiles.”

“China’s decision to ban ivory imports for a full year could be a real victory in helping to reduce poaching and wildlife trafficking depending on how the ban is enforced. But, China has ample stockpiles of ivory that it can still release into the legal market while the ban is in place. The domestic market those stockpiles create needs to be limited for real change to take place,” added Peter Lehner, executive director of the Natural Resources Defense Council. “This is an important step in the right direction. And more still needs to be done to restrict the sale – and reduce demand for – elephant ivory in China, the United States, and around the world. Until we cut off people’s desire for ivory, elephants will continue to die.”

Carved ivory represents a fraction of China’s elephant ivory imports. Much of the ivory brought into the country is smuggled illegally.