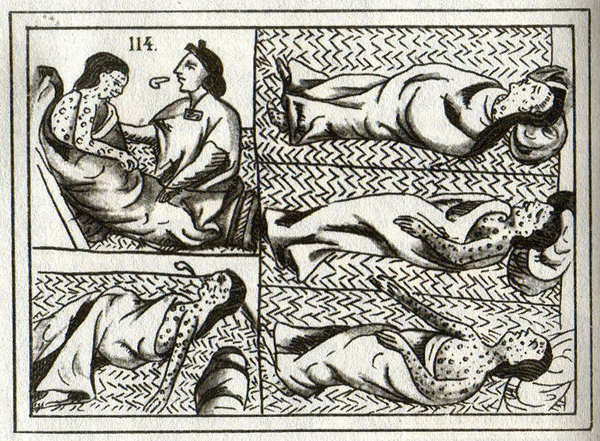 Aztec drawing showing smallpox victims after first contact with Europeans in the 16th Century. Estimates vary but many scholar believe disease wiped out around 95 percent of the pre-Columbian population after the Europeans arrived.

Indigenous communities in South America have long experienced devastating impacts from contact with Western society. In the Sixteenth Century, European colonists brought slavery, war, and violence, but disease proved the most devastating. In all, European contact destroyed over 95 percent of the native population.

Today, the remaining indigenous “untouched” or “uncontacted” groups in the Brazilian Amazon still face encroachment from cattle ranchers, illegal logging, drug trafficking, and disease. However, recent research suggests there is hope for the remaining uncontacted indigenous peoples, based on a long-term demographic study that showed positive growth rates for indigenous communities after the initial fallout from contact.

The study, published in the journal Scientific Reports, examines the long-term dynamics of 238 indigenous communities in Brazil and assess the impacts of European contact, including estimating minimum viable population size and analyzing post-contact growth rates. Scientists from the Universities of New Mexico and Missouri found that trends among these surviving indigenous communities are characterized by an initial severe drop in population followed by an extremely high growth rate, with most groups growing at an annual rate of three to four percent—among the fastest recorded in any human population.

Population sizes pre-contact were, on average, 5.5 times larger than populations after they had encountered Europeans. The staggering drops in population were largely a result of introduced diseases to which uncontacted indigenous communities have little to no immunity. However, the study found that recovery of the population generally begins within a decade after contact, as most communities experienced a rebound by the end of the first decade post-contact.

Marcus Hamilton, lead author and post-doctorate fellow at the Santa Fe Institute, emphasized the importance of using research such as this to develop a more holistic understanding of indigenous communities.

“We need to know not only basic demographic parameters like population growth rate, but [also] what external impacts might be affecting those parameters,” Hamilton noted. “For example, we have reconstructed population histories for recently contacted populations and studied how they have rebounded from population crashes that historically follow from contact. We also need to understand basic things like what kinds of villages these people live in, and what those village population sizes and densities are.” 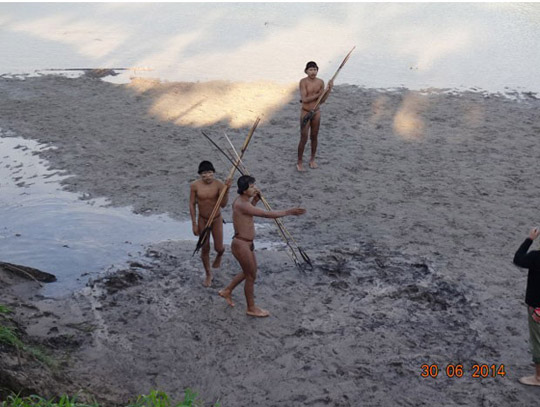 An image of the encounter with the Rio Xinane tribe members last year. This was one of the first encounters with this isolated tribe. Photos by FUNAI

Despite the ability of some groups to rebound quickly, there is uncertainty about the long-term impacts on their communities in a rapidly changing Amazon. Today, indigenous tribes face threats beyond disease, including deforestation, dam and road development, breakdown of community networks, and the loss of cultural knowledge. Currently, indigenous communities range from those that have minimal contact with the modern world to those who have fully integrated into Western society.

The Brazilian Amazon contains the largest number of uncontacted tribes, with 23 confirmed groups and 47 potential locations of uncontacted communities. It is the Brazilian government’s policy to avoid contact with these tribes unless they face extreme risk of survival. However, many of these communities are surrounded by the soybean or cattle industry, or are under assault from illegal loggers and miners.

In the summer of 2014, an uncontacted tribe approached a group of Brazilian government officials—the first contact with an isolated Amazonian tribe in 20 years, Reportedly, the tribe was seeking help to defend against illegal loggers and drug traffickers.

“Pressing concerns [for these native communities] are legal and illegal logging, mining, and narcotrafficking, which destroy the habitats on which they rely, and often lead to direct violence and extermination of indigenous peoples,” Hamilton said. “Our research tries to estimate the threat level of these different sources by studying how demographic parameters like population growth rate is impacted by various threats.”

Insights from this research could help predict impacts to these tribes if they are contacted and may help protect them in the long term. For example, improved health care policies may mitigate some negative effects of first contact. Demographic knowledge obtained through this research could also help shape conservation and indigenous community policies in Brazil and in other areas to help protect these hugely threatened aboriginal communities.

Caitlin Williamson is a M.Sc. student in the Nelson Institute for Environmental Studies at the University of Wisconsin-Madison.