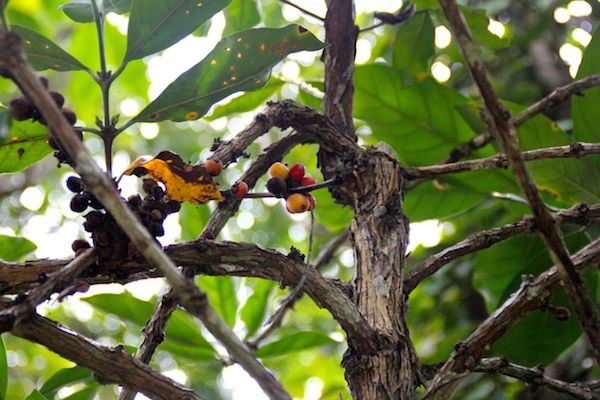 Coffee-growing is an important part of the economy of Semende. Photo by R. Ridzki Sigit.

The rolling green hills covered in rice paddies and coffee plantations give Semende in the Muara Enim regency of South Sumatra a welcome and hospitable feeling. However, behind the peaceful pastoral veil, is a history of rampant forest encroachment and land conflict in the Barisan mountains.

Home to around 36,000 people, Semende is known for coffee. The region primarily produces Robusta coffee, the high-caffeine strain often used in bulk and instant coffee. According to government figures, coffee plantations in Semende span 23,485 hectares, and produce close to 25,125 tons of coffee per year.

According to data from Global Forest Watch, this 278,000-hectare region of Muara Enim lost approximately 88,000 hectares of its tree cover between 2001 and 2013, the result of both forest clearing and plantation harvesting. Click to enlarge.

In addition, some farmers produce a highly regarded specialty coffee known as Kopi Luak, or civet coffee, made from beans cleaned by the natural digestive processes of a civet’s intestinal tract. Most residents still use free-roaming civets, as opposed to other areas where farmers force-feed coffee cherries to caged civets. The farmers here believe the free-roaming civets choose the ripest fruit to eat, thereby processing the highest quality beans.

The name Semende is said to originate from the words “sama” (same) and “nde” (family), and locals pride themselves on their tight-knit community. In colonial times, the Semende people were known as valiant and bold warriors. Their guerrilla tactics in warfare made them difficult to conquer.

Recently, however, they have found themselves embroiled in a different kind of conflict.

Issues began in 1995 when coffee farmers were accused of encroaching into the Jambul Asahan protected forest—an 82,000-hectare expanse of land set aside in the mid-1980s. The locals claimed this land is theirs by ancestral rights, pointing to the presence of fruit trees in the forest cultivated by their ancestors. However, the forestry department saw it differently, and tried to forbid any activity in the protected area.

In the midst of growing tensions, the forestry department decided to try a different tactic: instead of forbidding access, why not see if the locals could be recruited as forest stewards? Thus, the concept of village forests, or “hutan desa,” arrived in Semende. 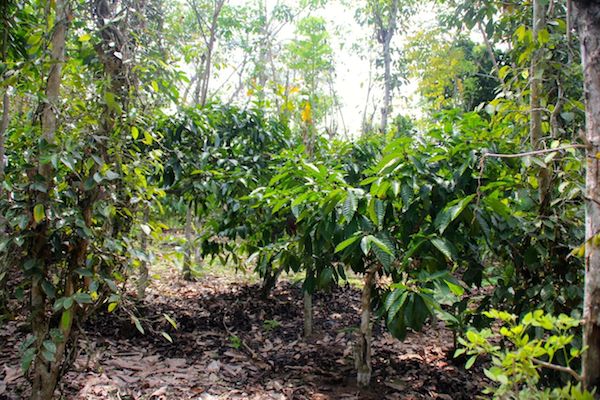 Coffee grows within a stand of forest near Semende. Photo by R. Ridzki Sigit.

Under the new plan, each head of household would be given a 1.5-hectare plot in the protected forest to manage as their own for 35 years. The land must not be used to expand plantations, but can be enhanced by planting fruit trees such as durian, jengkol, or jackfruit. In addition, farmers are allowed to plant coffee in the understory. In exchange for all of this, they must agree to protect the animals that reside in their plot and guard against fire. To ensure compliance, the forestry department conducts regular inspections every five years.

Seeing an opportunity for longer-term security and freedom from harassment, the locals welcomed the offer. By the end of 2011, five villages were involved in developing the Hutan Desa program, and by 2013, 15 had joined the discussion. Finally, in 2014, with the assistance of the Green Earth Forum (WBH), an environmental NGO, the government issued Hutan Desa permits to 12 villages, encompassing a total area of 26,430 hectares.