Indigenous communities claim—and scientific evidence increasingly shows—that indigenous forested territories are as well protected as, or better protected than, government-designated parks. In areas under pressure from roads or development projects, deforestation rates are sometimes even lower in indigenous territories than in official protected areas.

With such data backing them up, indigenous leaders argue that they are better protectors because they actually use their territory. When they hunt, fish, and travel from place to place, they acquire a detailed and intimate knowledge of the flora and fauna, allowing them to note changes better than an outside monitor would, and help keep invaders like illegal loggers or miners at bay.

“In many places, there aren’t even government officials to patrol [protected] areas. The only ones who safeguard the areas are indigenous peoples,” Jorge Furagaro of the Coordinating Committee of Indigenous Organizations of the Amazon Basin ( Coordinadora de Organizaciones Indígenas de la Cuenca Amazónica, COICA) said during the most recent UN Climate Summit held in early December in Lima.

But indigenous groups cannot effectively protect their forests if they do not have formal rights to them, he added. Furagaro and other leaders at the summit called for governments to grant title to territories that are still awaiting official designation.

About 100 million hectares of indigenous land in the Amazon basin still have not been titled, according to Edwin Vásquez, who heads COICA.

Pressuring the Peruvian government to grant indigenous communities title to some 20 million hectares in the country will be a priority for the Inter-Ethnic Association for Development of the Peruvian Amazon (Asociación Interétnica de Desarrollo de la Selva Peruana, AIDESEP), notes Henderson Rengifo, who took over as president of that association in December 2014.

Policy makers also should figure those indigenous territories into their conservation plans, creating corridors between government-managed conservation areas and indigenous lands, especially given the uncertainties about how climate change will affect the Amazon forest, says José Alvarez, director of biodiversity for Peru’s Environment Ministry.

The people living in indigenous villages as well as other communities along Amazonian river banks are “good allies” for governments, he says. “There’s no one to whom mitigating the impacts of climate change matters more.”

But while they may be complementary at times, indigenous communities’ territorial claims sometimes conflict with local and regional governments’ plans for protected areas. 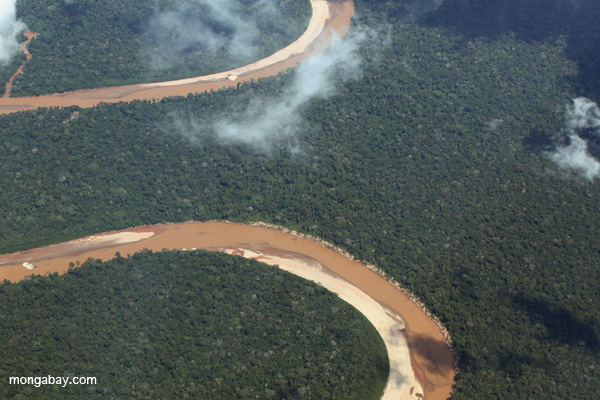 An winding river in the heart of the Peruvain Amazon. Photo by Rhett A. Butler / mongabay.com

In Peru and other countries, indigenous communities that were once evicted to make room for conservation areas are beginning to demand their territorial rights back. Kukama Kukamiria leaders around the Pacaya-Samiria National Reserve in Peru’s northeastern Loreto region and Ese’eja communities near the Tambopata National Reserve in the southeastern Madre de Dios region are among those seeking expanded rights.

Alfonso López, president of the Kukama-Kukamiria organization ACODECOSPAT in the lower Marañón River Valley in Loreto, says the communities along the edge of the reserve would manage Pacaya-Samiria better than the government can with its small force of park guards.

In mid-December, government officials confiscated more than 750,000 board feet of timber cut illegally in the reserve and its buffer zone. The seizure of these logs showed that protected areas, despite their designation, are still hugely vulnerable to illegal activities, such as logging, wildcat mining, poaching, and growing drug crops, which can put park guards and people living nearby at risk.

The multi-agency task force that staged the raid was established after four Asháninka men were killed on the Peruvian-Brazilian border in late August, allegedly by illegal loggers.

Edwin Chota Valera and Jorge Ríos Pérez were leaders of the community of Saweto, on the Alto Tamayo River. They and two other community members—Leoncio Quincima Meléndez and Francisco Pinedo—apparently were ambushed and murdered as they traveled on foot from Saweto to the neighboring Asháninka community of Apiwtxa, across the border in Brazil. Chota and other community leaders had spent several years trying to get the government to title the community’s land.

In addition to illegal logging, park guards have also found fields of coca, the plant used to make cocaine, inside the Pacaya-Samiria Reserve. Biologists doing field research have reported coca in other protected areas, including the Cordillera Azul and the Sierra del Divisor on the border with Brazil.

There have been spills from oil wells inside Pacaya-Samiria, which existed when the reserve was created and are now operated by the Argentinian company, Pluspetrol, Meanwhile, an oil pipeline operated by state-run PetroPeru leaked oil into the buffer zone at least twice this year.

A pipeline spill in June killed fish in lagoons around the Kukama villages of Cuninico and Santa Rosa, affecting both the families’ diet and their income, as buyers stayed away from the spill-impacted fish. While community members can buy fish from others, the local scarcity has pushed prices up to two or three times the normal level, according to Galo Vásquez, president of the community of Cuninico.

Throughout the Amazon, about 1.4 million square kilometers of protected areas and indigenous lands are threatened or under pressure from development activities, according to a study released during the Lima climate summit .

“We think of these areas as being out of harm’s way, but we need to take a second look and [ask if they] have been forgotten because of their ostensible protected status,” said Wayne Walker, the study’s lead author and an ecologist at the Woods Hole Research Center in Massachusetts.

Walker combined maps of 2,344 indigenous territories, 610 protected areas, and development projects, using data from RAISG, a consortium of non-profit organizations in the Amazon . The study considered an area “under pressure” if they faced imminent impacts and “threatened” if they might be affected by projects already on the drawing board.

The indigenous territories and protected areas under pressure or threat total about 1.4 million square kilometers in the Amazon. These areas are covered by vegetation that locks up about 17 billion metric tons of carbon and some of the richest biodiversity on the planet.

While some communities seek rights to protected areas that they consider their ancestral territory, others in Peru are lobbying for titling of territories. These areas would be larger than the separate, individual communities that the government has historically recognized in the past.

The reason is partly ideological and partly practical. Proponents of territorial titling see it as a way of reasserting indigenous identity and regaining control over larger areas. They argue that titling of individual communities has crowded indigenous people into smaller and smaller spaces

There are also practical considerations. Many communities have received title to a much smaller area than the area they traditionally used for hunting, fishing, and small-scale crop cultivation. These communities could face food scarcity in the future, especially if their populations increase.

But Alvarez and other observers believe the government is unlikely to approve requests for titling of larger territories, because they overlap land that is or could be zoned for other uses, such as timber production, mining or oil.

Because of that, Alvarez sees regional conservation areas like Tamshiyacu Tahuayo or Ampiyacu-Apayacu which are designed and managed jointly by the government and indigenous communities—as a middle ground between state-run protected areas and large territories titled to and managed by indigenous groups.

Leaders of indigenous organizations in Peru’s Loreto, Ucayali, and San Martín regions, however, say that some planned municipal or regional conservation areas overlap lands where communities have applied for title, but are still awaiting a response.

Even when conservation interests seem to coincide, however, tensions can arise. In 2005, the San Martín regional government created the 150,000-hectare Cordillera Escalera Regional Conservation Area in the upper Huallaga River watershed to protect headwaters that provide water to the city of Tarapoto and surrounding communities. But Kechwa communities protested that they were not consulted about the conservation area, which restricted their access to an area where they traditionally hunted and farmed.

But part of the reason for creating the conservation area in 2005 was to challenge an oil lease that overlapped the zone. Government officials said oil drilling there would threaten the water supply. 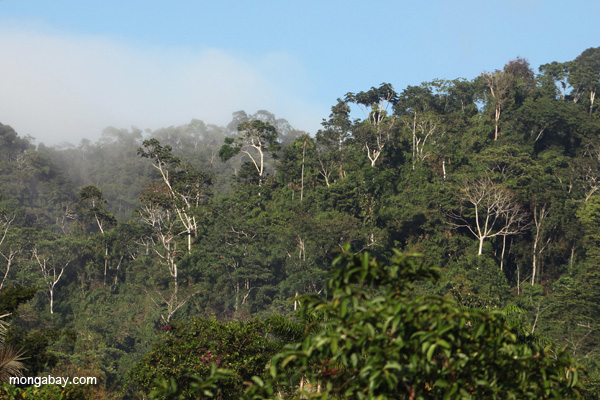 A stunning profile of the Amazon rainforest. Photo by Rhett A. Butler / mongabay.com

Peru’s Constitutional Court issued a ruling in 2009 suspending petroleum operations in that area, and Occidental Petroleum, which had held the lease, withdrew. Now, the lease is held by Spain’s Repsol.

The Constitutional Court ruling left open the possibility that oil operations could resume if the master plan for the conservation area found that they were compatible with the protected area’s goals.

Ironically, if Repsol pushes to resume operations and government officials object, the dispute over ancestral rights in the conservation area could weaken a potential alliance against oil drilling between the Kechwa federation and the regional government.

Paige West, an anthropology professor at Barnard College and Columbia University, has seen the same thing happen in other parts of the world. But the problem could be alleviated with more information and a process for equitable decision-making, she says.

“An indigenous community may be affected one way, a non-indigenous community another and an oil company that considers itself a ‘stakeholder’ another way,” she says. “One of the things that helps mitigate these situations is to have someone (involved) who understands the complexity.”

Building alliances between government park planners and indigenous communities takes time and trust on both sides. But as scientists and policy makers gain a greater understanding of the importance of Amazonian forests as a buffer against climate change, the region could see more possibilities for partnerships in the future.