Restoring degraded land and forests with the world’s fastest growing plant, bamboo, can contribute to major carbon emission reductions. This is according to a new report released at the COP20 in Lima by the International Network for Bamboo and Rattan (INBAR) that discusses the massive potential of bamboo in fighting global warming, with bamboo forests projected to store more than one million tons of carbon by 2050 in China alone. A bamboo forest in Colombia. Photo by Rhett A. Butler.

INBAR is composed of 40 member countries and is dedicated to improving the livelihoods of poor farmers and users of bamboo and rattan, and promoting sustainable development with environmentally friendly practices. Bamboo offers a number of benefits, according to Friederich, including rapid restoration, large-scale carbon sequestration, supplying a sustainable source of energy, and providing raw material for construction, textiles, household products, furniture, and an increasing list of other innovative uses. INBAR has a number of programs targeting climate change, environmental sustainability, poverty, sustainable construction, and trade development. The organization also supports market access for growers and innovation in bamboo and rattan products. Ban Ki-moon, Secretary-General of the United Nations, appeared at the 2013 COP in Warsaw, Poland, riding a bamboo bicycle.

Despite its tree-like appearance, fast-growing bamboo is actually a member of the grass family, Poaceae. Often associated with Asia as the primary food source for the endangered giant panda (Ailuropoda melanoleuca), bamboo is pan-tropical, with more than 1,250 native species growing across the globe in the Americas, sub-Saharan Africa, and Asia. Bamboo is also part of the diet of the critically endangered mountain gorilla (Gorilla beringei beringei) living in tropical forests in Uganda, Rwanda, and the Democratic Republic of the Congo. 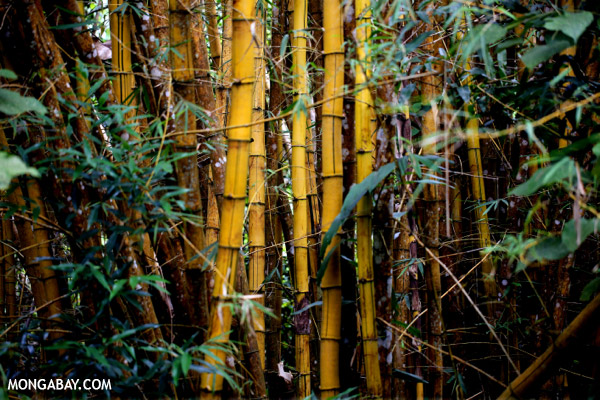 Bamboo in Madagascar. Photo by Rhett A. Butler.

According to the INBAR report, bamboo has many benefits. Bamboo forests can help mitigate global warming by sequestering carbon at sites that have been deforested or degraded more quickly and at a higher rate than many tree species. For instance, the report references studies that project carbon stored in Chinese bamboo forests to increase from 727 million metric tons in 2010 to 1,018 million metric tons in 2050 — or by nearly 40 percent in as many years. In addition, bamboo may help reduce reliance on fossil fuels by providing an alternative, renewable energy source. Bamboo may also help protect wildlife habitat. The report states 1.7 billion people around the world rely on biomass, such as wood, as their primary energy source; planting bamboo groves may reduce dependence on and destruction of natural forest for fuel.

Rattan is a group of roughly 600 climbing palm species native to Southeast Asia that is used for its fibers in furniture, construction, and handicrafts, according to a 2011 WWF report. Due to poor harvesting practices, however, rattans are threatened with overexploitation, explained Friederich.

Member countries of INBAR have used legal mechanisms to promote the beneficial use of bamboo and rattan in a variety of functions, reflecting the plants’ diverse uses, according to an INBAR media release that accompanied the report. In Rwanda, a legal decree requires local authorities to plant bamboo along rivers to control erosion. Ethiopia has an estimated one million hectares of bamboo forest, integrated into a national plan for sustainable development and large-scale landscape restoration. The Ghanaian Ministry of Lands and Natural Resource has promoted the use of bamboo and rattan creating 15,000 new jobs between 2002 and 2012. A presidential decree in the Philippines requires that 25 percent of all school furniture be sourced from bamboo, around 139,000 desks each year. China has accepted bamboo as a climate change mitigation tool, with more than 50 thousand tons of CO2 equivalent certificates issued on the voluntary market to date, and many more expected with the application of the Chinese regulatory carbon market coming into effect in 2016. 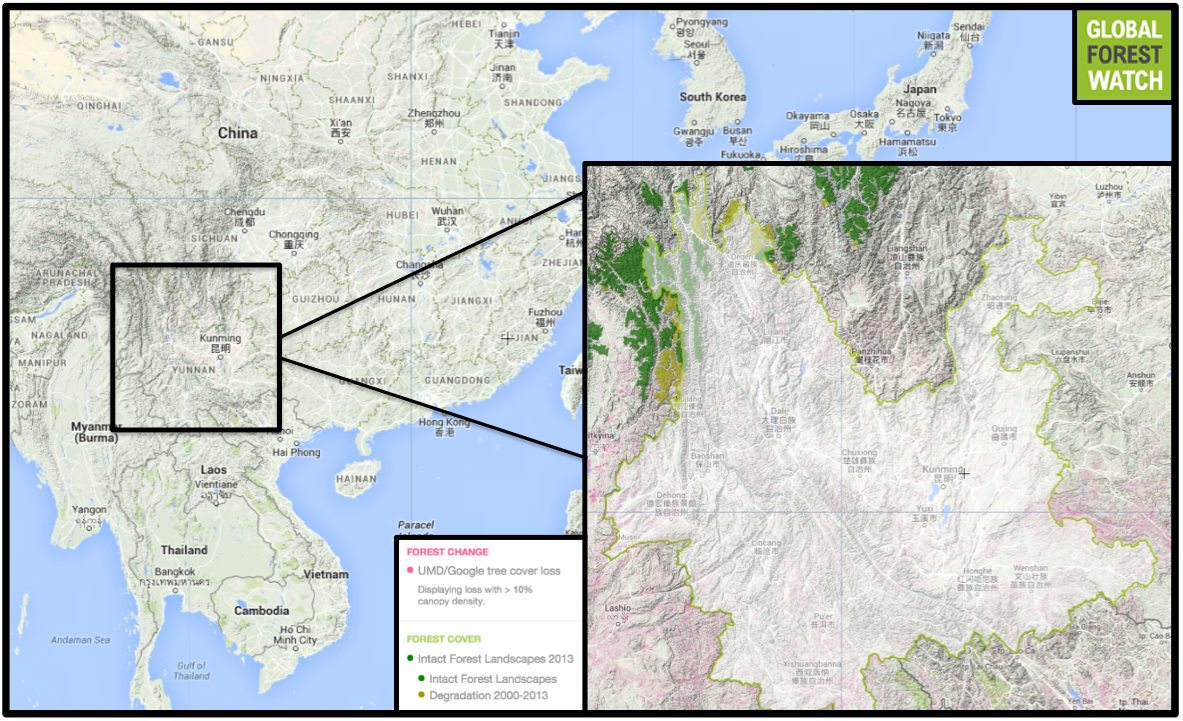 Global Forest Watch data shows China’s Yunnan Province lost approximately 500,000 hectares of tree cover from 2001 through 2012 (although some of this may be attributable to the harvesting of tree plantations), and is nearly devoid of large tracts of intact forest. According to the INBAR report, the Geneva-based Gold Standard Foundation has included bamboo in its afforestation and reforestation
methodology, including issuance of the equivalent of 46,000 tonnes of carbon credits for bamboo reforestation in Yunnan. Map courtesy of Global Forest Watch. Click to enlarge.

While many gardeners know bamboo as an invasive pest, bamboo and rattan are critical for the livelihoods of millions of people around the world, according to the INBAR report. Despite their huge importance in the lives of a significant proportion of the world’s population, little attention has been paid to the potential of these fast-growing plants in providing a sustainable path to development and climate change mitigation. Tapping into the power of bamboo may add another critical tool in our fight against climate change.