by Morgan Erickson-Davis on 12 November 2014

Scientists have discovered a new, endangered plant species in the Democratic Republic of Congo (DRC), in an area that is supposed to be protected as a reserve. However, mapping errors effectively moved the reserve’s boundaries 50 kilometers to the west, opening up the region and its vulnerable wildlife to human disturbance.

The new species is a dangling, fern-like flowering plant that exists on only a few cliffs in the far-eastern portion of the DRC, near its border with Tanzania. First collected in 2012, a study published last month in Phyto Keys describes the species as physically distinct from others in its genus, inhabiting “moist and shady vertical rock faces close to small waterfalls in the forest,” and is endemic to the region in which is was found, meaning it exists nowhere else in the world. 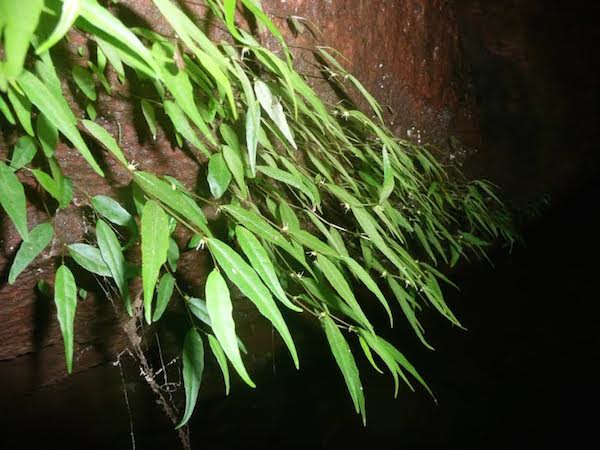 The new species (Dorstenia luamensis) hangs off cliffs in Luama Katanga Reserve, which is threatened with forest loss due to a mapping error. Photo by Miguel Leal/WCS.

Since the species was found in only small, scattered populations, it “merits the conservation status of endangered,” writes Miguel E. Leal, the study’s author and a scientist with the Wildlife Conservation Society (WCS).

Ironically, scientists named the species Dorstenia luamensis after the Luama Katanga Reserve that is supposed to protect it. But official maps erroneously show the reserve in a different place, leaving the new species and others at risk of habitat loss.

The approximately 230,000-hectare Luama Katanga Reserve was established as a protected area (PA) in 1947 because of its wealth of species, including more than a thousand eastern chimpanzees (Pan troglodytes schweinfurthii) and 900 varieties of plants. However, when official maps were made during DRC’s civil wars that began in the latter part of the twentieth century and extended into the twenty-first, government administrators and the World Conservation Monitoring Center accidentally “moved” the reserve 50 kilometers (30 miles) to the west. This effectively revoked protections to the actual reserve, which is now threatened by cattle ranching and forest clearing.

The announcement of the error came at the 2014 IUCN World Parks Congress, a decadal event that is taking place this week in Sydney, Australia. According to conservationists, it demonstrates the critical importance of proper mapping for safeguarding at-risk areas.

“The moral of this story is that keeping track of parks – and especially getting maps and boundaries correct – matters hugely for biodiversity. The call to action here is to fix the records and re-protect the reserve before this unique plant and all the biodiversity it contains, including 1,400 chimpanzees, are destroyed,” said James Deutsch, WCS Vice President of Conservation Strategy.

According to Andy Plumptre, Director of WCS’s Albertine Rift Program, the main threat to the area comes in the form of agriculture. Ranching is big in the region, and requires large tracts of cleared land. As people fell trees and cattle move in, forests are converted to pasture. Data from Global Forest Watch, a forest monitoring platform, shows the area that is supposed to be protected as Luama Katanga Reserve lost more than 6,000 hectares of forest from 2001 through 2012—or nearly 3 percent of its tree cover. 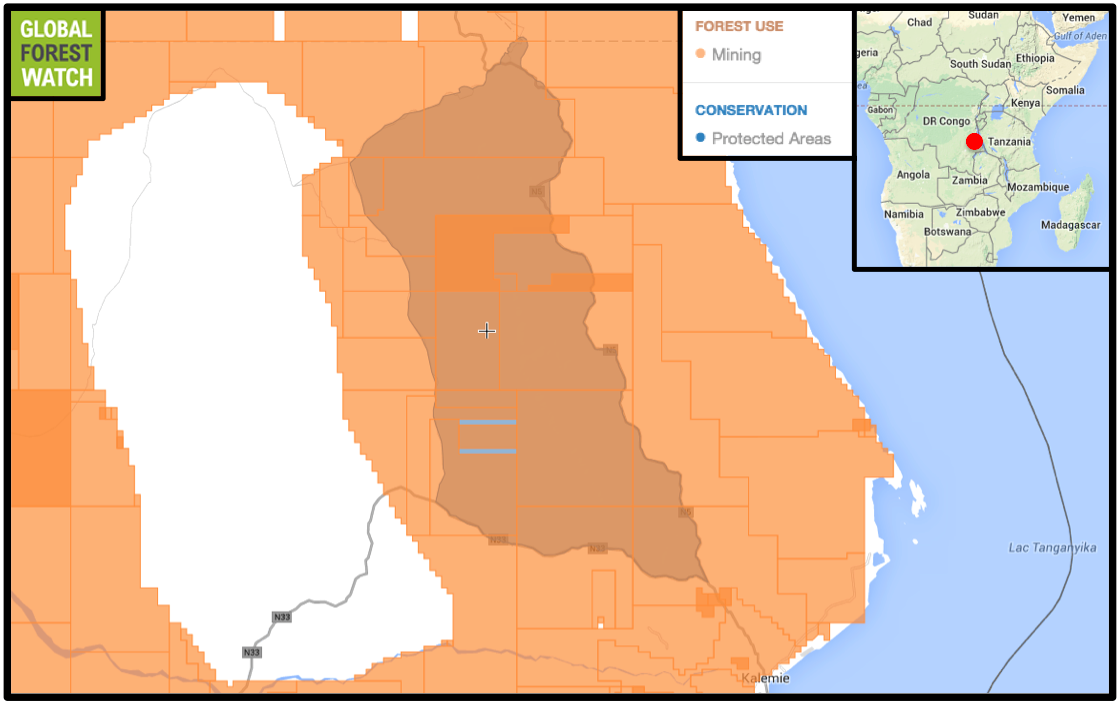 Mining concessions take up nearly all of Luama Katanga Reserve (here properly depicted by Global Forest Watch), but are completely absent in the area administrative maps mistakenly regard as the reserve. Map courtesy of Global Forest Watch. Click to enlarge. 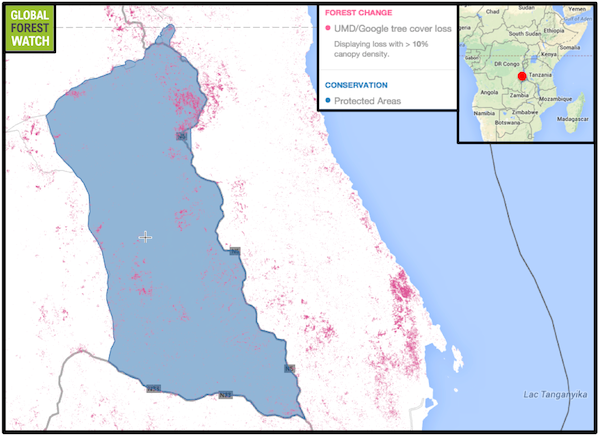 Lacking protections due to a mapping error, Luama Katanga Reserve lost 6,000 hectares of its forests in just over a decade. The proposed Ngamikka Park, part of the Kabobo biodiversity hotspot, would occupy the area directly east of Luama. Map courtesy of Global Forest Watch. Click to enlarge.

The reserve is also almost entirely covered in mining concessions, part of a mineral extraction “tsunami” threatening many of the DRC’s forests.

“There is a real need to re-gazette the correct reserve as it is biologically important, and also because people are starting to move into it and cultivate it and graze cattle there,” Plumptre said. “The reserve this plant was named after no longer exists because of an error from both WCMC and the government not checking their maps correctly.”

In addition, the area is adjacent to the Kabobo biodiversity hotspot, a region globally noted for its high number of endemic species threatened by human activity, and which is currently vying for protected status. According to WCS, this makes reinstatement of Luama Katanga Reserve to its originally intended location even more important—if Kabobo is also listed as a PA and turned into the proposed Ngamikka Park, the two would create a large, uninterrupted tract of protected land through which wildlife may more freely move.

However, although the mapping mistake has been recognized by conservation organizations and broadcast to the world, fixing it is no quick order.

“We are lobbying [the Congolese Institute for Nature Conservation] and the minister who made the new decree,” Plumptre told mongabay.com, “but it is moving very slowly.” 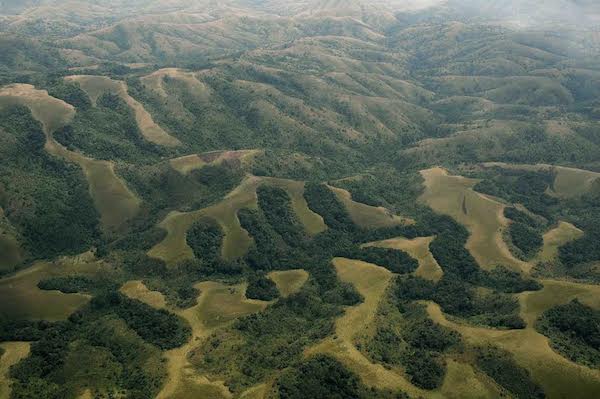 Luama Katanga Reserve is covered in gallery forests, which are naturally interspersed with savannah. Photo by Andrew Plumptre/WCS.