Even if the world stopped cutting down forests, carbon dioxide emissions from land use change would still pose a major challenge, according to a new paper in Nature Climate Change. The research finds that eliminating deforestation would mean agriculture would be pushed into non-forest ecosystems and still release significant quantities of carbon dioxide.

“While protecting forests to abate climate change is definitely worthwhile, our results illustrate for the first time that forest protection policies alone will not be enough to mitigate greenhouse gas emissions from land-use change”, said lead author Alexander Popp of the Potsdam Institute for Climate Impact Research (PIK).

Using computer modeling, Popp and his team found that ending deforestation had the potential to keep 77 billion tons of carbon dioxide from entering the atmosphere by 2100. However, carbon dioxide from land use change would still prove stubbornly high at 96 billions over the century, due to expanding agriculture into other habitats.

“Our study shows that, without further management, a global implementation of forest conservation schemes could lead to new type of carbon leakage,” Popp said. 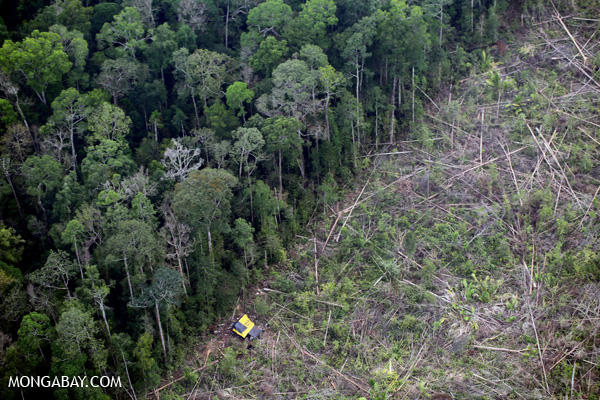 Deforestation in Riau, Sumatra. Photo by: Rhett A. Butler.

The researchers suggest that instead of just focusing on forests, international agreements should also take into account other high-carbon ecosystems. This could mean expanding REDD+ (Reduced Emissions from Deforestation and Degradation) to include important non-forest ecosystems, or setting up other initiatives to focus on these neglected ecosystems.

“The results show that the largest benefits for climate change mitigation could be achieved by a full participation of all countries in a forest conservation scheme and the inclusion of other land types with high carbon content, like wet savannahs,” concluded Popp.

In September, a number of countries and corporate giants signed onto the so-called New York Declaration on Forests, committing to ending deforestation by 2030 and slashing deforestation in half by 2020, just six years away.

But preserving forests and other high-carbon ecosystems would likely require a farming revolution to grow more food on less land or to drastically change current dietary trends. Given that the global population could hit anywhere between 9 and 13 billion by 2100, societies may have to choose between trade-offs of avoiding carbon emissions—including safeguarding biodiversity—and food production. However, none of these issues are detached. In fact, the more carbon emitted into the atmosphere, the bigger the impacts on agriculture due to a rapidly warming planet.

(07/23/2014) In an effort to kickstart investment in mining and fossil fuels, Peru has passed a controversial law that overturns many of its environmental protections and essentially defangs its Ministry of Environment. The new law has environmentalists not only concerned about its impact on the country but also that the measures will undermine progress at the up-coming UN Climate Summit in December.