Nearly 50 percent of tropical deforestation to make room for commercial agriculture between 2000 and 2012 was done so illegally. That’s a key finding of a report published by the U.S.-based nonprofit organization Forest Trends looking at the global tide of tropical forest “agro-conversion.”

“I don’t think there was sufficient appreciation for the scale of this problem,” said lead author Sam Lawson.

The publication systematically documents abuses of national and international laws that resulted in deforestation to satiate the world’s hunger for cheap agricultural products. In Bolivia, for example, land clearing to plant soybeans, three-quarters of which end up being exported, has been the main cause of deforestation. The parliament in New Guinea investigated the country’s process to control agro-conversion in 2012 and discovered that 90 percent of licenses were tainted by corruption or fraud. And 40 percent of exported palm oil – the cheap fat found in so many of the products found on supermarket shelves in wealthy countries – comes from plants that illegally replaced forests. The forests of the Republic of Congo are home to the endangered western lowland gorilla (Gorilla gorilla gorilla). Photo by Rhett A. Butler.

Up to now, most regulations aimed at tackling deforestation focus on timber harvesting from selectively logged forests, in which suppliers manage an area of forest expressly for the purpose of exporting wood to the huge markets in the EU, the U.S. and Asia. What they don’t deal with is the clear cutting that often happens before companies set up agricultural plantations to produce soy, beef and palm oil, Lawson said.

“It’s a bit like [Alcoholics Anonymous],” he told mongabay.com. “The first stage is to recognize and admit what the problem is, and I don’t think we’ve done that.” The “unfettered demand” for agricultural commodities regardless of their origin must be dealt with, Lawson said.

Saskia Ozinga, cofounder of the environmental organization FERN where she is also campaign coordinator, read an earlier draft of the study and said, “It’s very good that we finally have a report that documents the large extent of illegalities in the commodities sector.” She also said that the EU needs to take the lead on the demand side of the deforestation equation. A 2013 study of the EU’s consumption footprint found that its hunger for agricultural products is more than twice that of China and Japan combined and the EU is responsible for a third of deforestation as a result of agro-conversion.

The study points out that the EU could expand its Forest Law, Enforcement, Governance and Trade Voluntary Partnership Agreements – VPAs for short – to cover agricultural commodities beyond timber and wood products. Under a VPA, a timber-producing country pledges not to sell illegally harvest timber, per a negotiated agreement with representatives of the government, the timber industry, NGOs and the community. Ozinga, though, said she’s not sure if there’s the political will to do so, but she hopes that reports such as this one from Forest Trends might hold sway in policy circles.

Philippe Verbelen, a forest campaigner with Greenpeace, agrees that VPAs might help stem the flow of illegal timber and agricultural commodities to market, if the agreements are enforced. He points to more than 3,000 cubic meters of timber that Greenpeace found was cleared illegally and shipped to China to make way for American investor Herakles’ oil palm plantation in Cameroon, which calls into question the strength of the agreements. The terms of the VPA that Cameroon signed precludes that country from selling illegally harvested wood anywhere–not just to the EU. 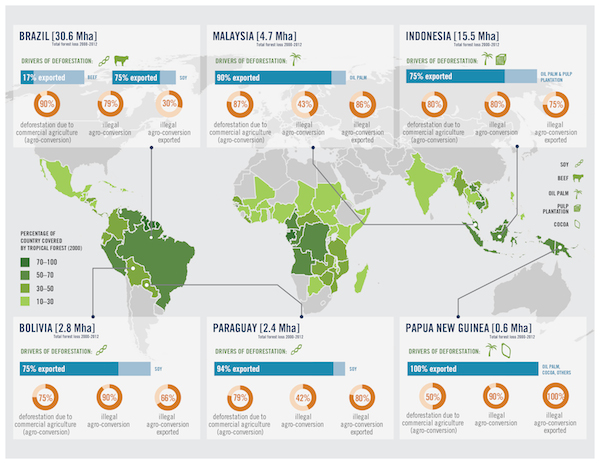 Ozinga points out that the ultimate goal of all of these measures is to encourage land development that takes into account the environment and the needs of the people who call live in countries that supply soy, palm oil and other products to the world.

“You need to link demand side measures with supply side measures,” she said. “You will only see a real change if the people and governments in a particular country really develop proper land use plans that provide sufficient food for the local people themselves, as well as for export,” she said. Right now, particularly in Africa, corruption and graft often mean that typically only a few people benefit when a company clears a patch of land to grow crops for export.

In preparing the Forest Trends report, as well as a paper called “Seeds of Destruction” in 2013, Lawson and his team investigated a Malaysian company called Atama Plantation that has paid the Republic of Congo for the right to develop an oil palm plantation on nearly 500,000 hectares – just slightly smaller than the state of Delaware in the United States. When you see it on a map, “It looks like someone’s fired a shotgun through the Congo forest,” said Lawson.

While the rate of deforestation in the Republic of Congo is less than some of its neighbors, it has still lost 20,000 to 40,000 hectares of forest per year since 2006, according to data from Global Forest Watch. In total, between 2001 and 2013, the country lost nearly 300,000 hectares, and its southern half is almost devoid of intact forest. Yet, its north still contains large, continuous tracts of relatively pristine rainforest, which are home to many species, such as the Critically Endangered Pennant’s colobus (Procolobus pennantii). It is in these intact areas where oil palm plantation development is primarily occurring, with the Atama concession directly threatening a significant proportion of the colubus’ range. 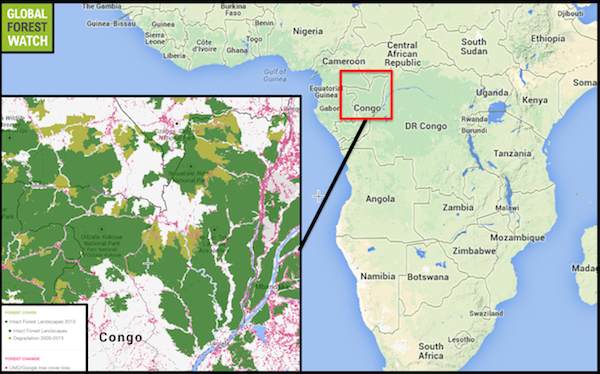 Congo’s intact forests exist almost exclusively in the northern half of the country, with many areas degraded since 2000. Map courtesy of Global Forest Watch. Click to enlarge. 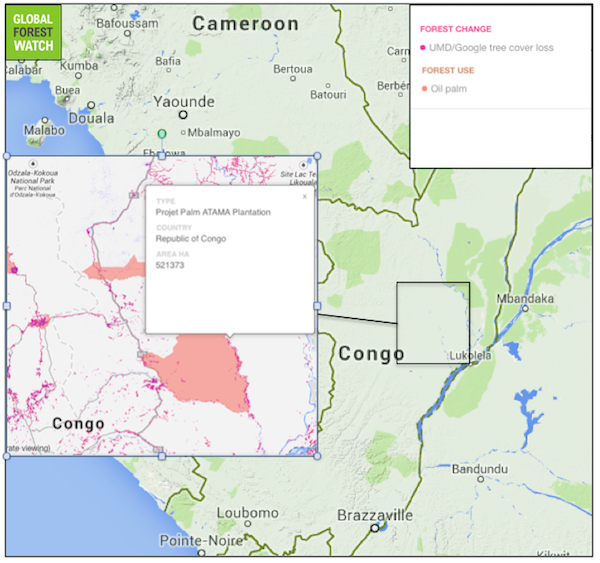 Atama Plantation oil palm concession in the Republic of Congo, showing the associated deforestation. The site is roughly the size of the state of Delaware. Map courtesy of Global Forest Watch. Click to enlarge.

A 2012 inspection found that a host of illegalities at the Atama site, from altered record books to the clearing of 350 trees without proper documentation. Lawson estimates that, in large part due to the Atama concession, 70 percent of the growth of the Republic of Congo’s timber production in 2014 will come from agro-conversion, and he estimates 80 to 100 percent of that is illegal.

Lawson found no evidence that the company had looked at the environmental impact of the plantation, even though the areas encompass the habitat of endangered western lowland gorillas, forest elephants, and chimpanzees. Nor does it seem that Atama ever sought the input of the thousands of people who live in this area.

“One has to recognize that for every land grabber, there’s also been a land giver,” said Simon Counsell, executive director of the Rainforest Foundation UK, which commissioned the “Seeds of Destruction” report.

Atama did not respond to repeated requests for comment from mongabay.com. But the company contends on its website that it will contribute to the Republic of Congo’s bottom line, “while making every effort to employ sustainable agricultural practices which will help preserve the biodiversity of the land by protecting the surrounding environment and wildlife.”

Indeed, corporations interested in developing oil palm plantations argue that their investments will bring much needed employment and income. “In a country as poor as Congo, many people would say that that is a good thing,” Counsell said. But, he cautioned, that’s often not the reality: “We’ve seen in many other countries around the world that palm oil companies have created a great deal of poverty and evicted many thousands of people from their land.”

With demand for cheap food all but certain to rise as the world’s population climbs toward nine billion by 2050, Africa is increasingly seen as an untapped frontier for large-scale agricultural production. Before that happens in earnest though, Counsell and those concerned about the effects that pressure will have on the forest and its inhabitants say that there must be better forest governance in place.

“It doesn’t mean you have to stop development dead,” he said. “It does mean that you have to level the playing field a little bit for the people who are living in and occupying the land.”

One way to do that is to rethink land ownership structures in these countries, said Ozinga. She pointed to Liberia as a model. While forestlands in the Republic of Congo and other Congo Basin countries are seen as the property of the state, Liberia is in the midst of putting ownership into the hands of the communities that inhabit them.

It’s a question of giving the people whose lives and livelihoods depend – and for centuries have depended – on the forest a voice and the opportunity to be stewards of their own environment, potentially protecting and making use of forest resources, as well as avoiding resource conflicts. But that will require better forest governance, with the countries that produce commodities agreeing to uphold forest peoples’ rights and not allow illegal deforestation, and consumer countries committing to only importing products that are not part of this global forest destruction cycle.

“Without that in place, you can’t really develop much further, unless you are really going to marginalize large parts of the population,” Ozinga added. “And that’s going to lead to lots of unrest.”