Strong memory, being able to predict the future, and acting based on one’s surroundings are traits typically associated only with the most advanced types of animals. However, a team of German and Dutch scientists from the Helmholtz Center for Environmental Research (UFZ) and the University of Göttingen found ecological evidence that plants also have these abilities. Their findings were recently published in The American Naturalist.

The researchers made their discovery by studying the European barberry (Berberis vulgaris). Although becoming increasingly common in North America, the European barberry is native to European dry scrub and open forested lands. A close relative, the Oregon grape (Mahonia aquifolium) has been spreading across Europe for the past 200 years, but not as fast as some botanists predicted. To find out why, the research team compared the two species and their responses to a shared parasite. 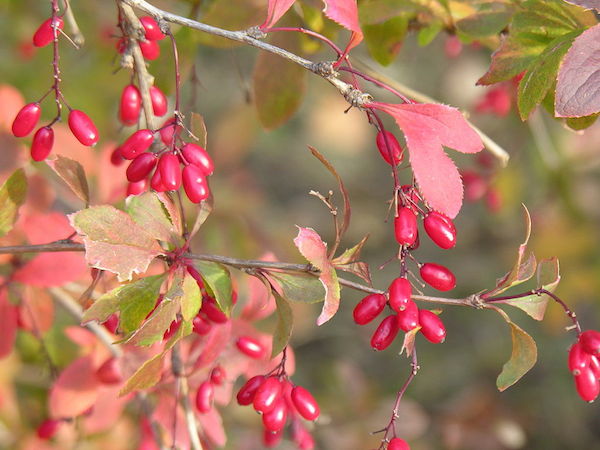 European barberries (Berberis vulgaris) have spread throughout the world due, in part, to their ability to respond to different environmental conditions.

Each plant is equipped with the ability to abort seeds when in danger of an insect predator or even stressed from drought. Since there are generally two ovules within the ovaries of European barberries, it is able to create multiple seeds. This adaptation could help save one seed if the other is aborted or eaten.

The scientists collected thousands of berries from German scrublands and forested lands that the plants inhabit. This allowed them to gather data on how the plants were affected by the lack of water available in the scrublands. Then they recorded how the plants were impacted by predation from fruit flies by counting the number of holes caused by the insects in each fruit and the number of seeds eaten versus seeds aborted as a result of larval infestation.

After comparing their results, the researchers found that the Oregon grapes have not been as successful as the European barberries because they have been attacked at much higher rates. Further investigation led the scientists to believe that plant intelligence may play a key role in why this is so.

The European barberry benefits greatly from its ability to selectively abort seeds that are threatened. On top of that, the scientists found that the plants also exhibit adaptive behaviors by only aborting a seed if it knows it has the ability to create a new one.

The researchers attribute some of the success of the European barberry to its home field advantage, and its coevolution with the native fruit flies. However, they also highlight the importance and complexity of these newly discovered ecological interactions, which they say may lead to many advances in the field of “plant intelligence.”