Is there hope for Africa’s most threatened ape subspecies?

The mountain forests at the Nigeria-Cameroon border are home to one of the rarest and most threatened subspecies of African apes – the Cross River gorilla (Gorilla gorilla diehli). Today, fewer than 300 individuals survive in the wild. These occur in 14 small, fragmented populations spread over a 12,000-square kilometer (4,633-square mile) landscape, characterized by rugged, hilly terrain and a matrix of farmlands, villages, and forests.

The Cross River gorilla lives in small groups of four to seven individuals made up of multiple males and females. Their diet usually consists of fruit, but they also eat leaves, stems and bark of herbaceous plants and trees when fruit is not available. Genetic studies indicate Cross River gorillas diverged from western lowland gorillas (Gorilla gorilla) around 20,000 years ago when parts of Africa became more arid, separating the two groups. 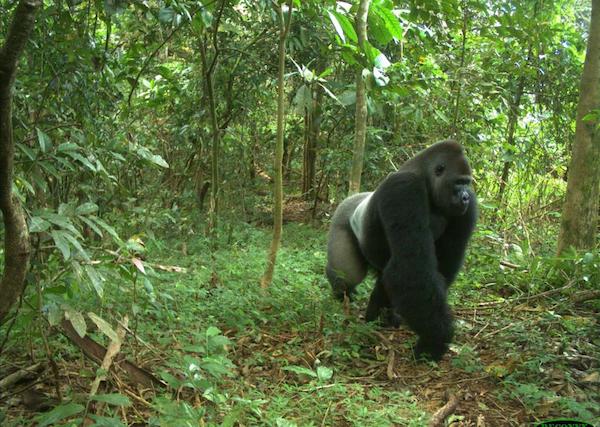 A Cross River gorilla, a distinct subspecies of which fewer than 300 still exist. Photo courtesy of WCS Nigeria.

Living in Nigeria, Africa’s most populous country, has not been easy for the gorillas. Since 1990, Nigeria has quickly become one of the top ranking countries when it comes to deforestation. According to data from Global Forest Watch, which defines forest as areas having more than 25 percent tree cover, Nigeria lost more than one million hectares of forest between 2001 and 2013. More liberal estimates from the International Institute of Tropical Agriculture peg the average amount lost at 400,000 hectares per year (about the size of three New York cities). According to the Food and Agriculture Organization of the United Nations (FAO), between 2000 and 2005, Nigeria lost over 55 percent of its forest cover due to logging, timber export and agricultural expansions, representing the highest rate of deforestation in the world. As of 2012, Nigeria’s tree cover stands at 12.5 million hectares, according to figures by Global Forest Watch.

Amid this rampant loss of forest cover, the fate of the 300-odd Cross River gorillas hangs by a thread. One of their important refuges, lying in Nigeria, is the Cross River National Park (CRNP) located along the Nigeria-Cameroon border. The park, an important biodiversity hotspot, was created in 1991 from four former forest reserves, and has two separate divisions – Oban in south-eastern Nigeria (contiguous with Korup National Park in Cameroon) and Okwangwo in north-eastern Nigeria (contiguous with Takamanda in Cameroon). 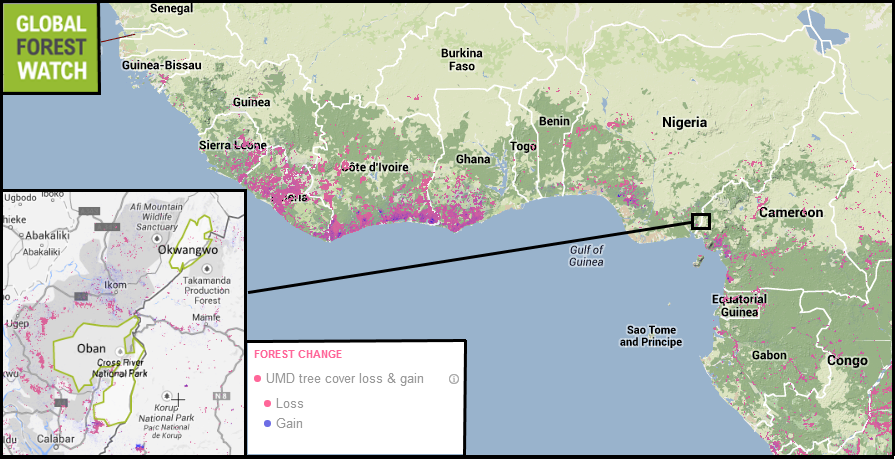 Cross River National Park is located at the border of Nigeria and Cameroon and is home to one of the rarest and most threatened African ape subspecies, the Cross River gorilla. The park stands as a relative oasis in a country with one of the highest deforestation rates in the world. Still, its wildlife is threatened by forest loss, fragmentation, and poaching within its borders. Map courtesy of Global Forest Watch. Click to enlarge.

Oban, the larger of the two divisions (approximately 3,000 square kilometers or 1,158 square miles), is famous for its threatened primates like the Nigeria-Cameroon chimpanzee, the drill, and Preuss’s red colobus monkey. In addition, this large swath of rainforest has forest elephants, leopards and thousands of birds, butterflies and plant species.

It is the second smaller division, Okwangwo (about 640 square kilometers or 247 square miles), where the Cross River gorillas live. Okwangwo connects with several other forests to form one large swath of rainforest, stretching from the Afi Mountain Wildlife Sanctuary in the west of Nigeria, to the Kagwene Gorilla Sanctuary in the east of Cameroon. But while the forests seem to form a tract of well-connected rainforests for the gorillas, wildlife here is under grave threat.

According to Imong, deforestation in Okwangwo is exacerbated by the presence of villages both inside and along the park border. While there are 39 villages along Okwangwo border, with an estimated total population of 29,000, there are three large villages enclaved inside Okwangwo. 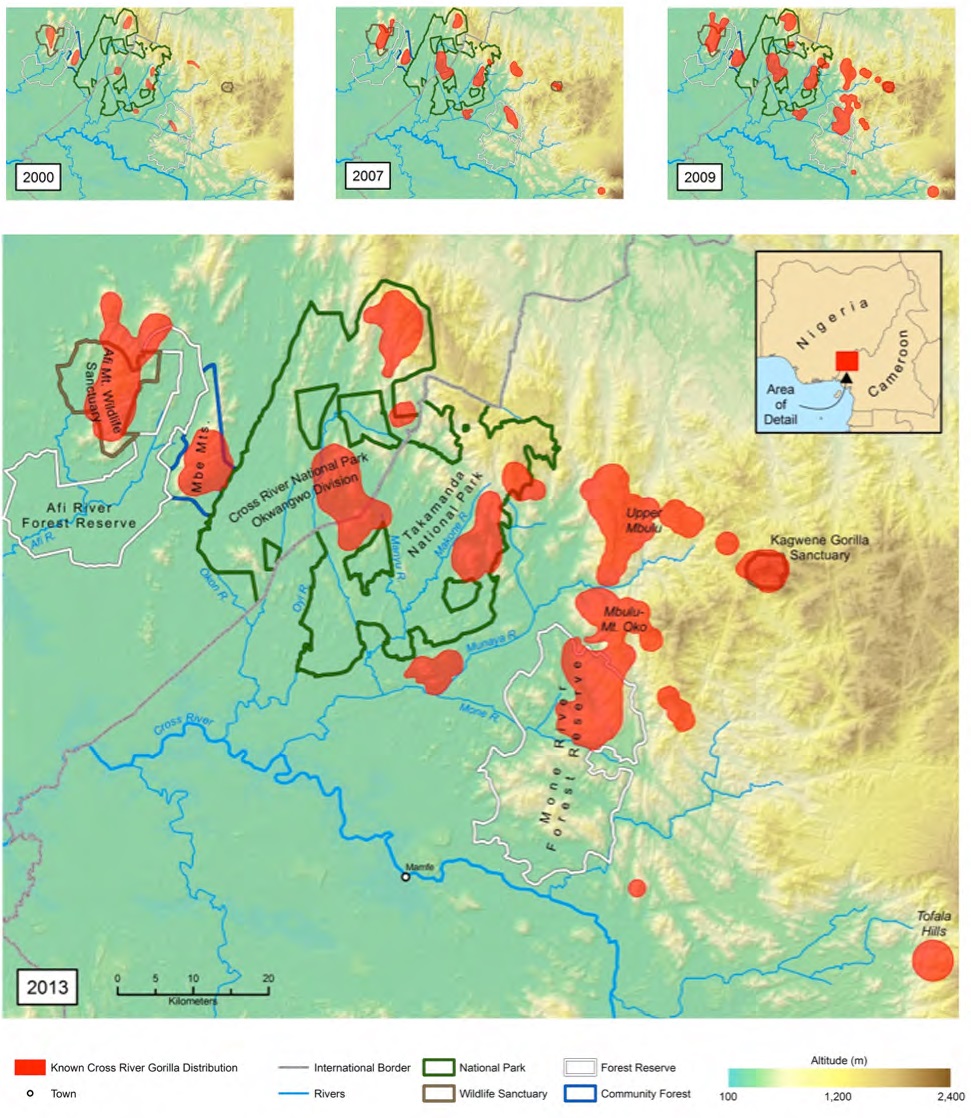 Estimated Cross River gorilla distribution change over time. According to the authors of a conservation action plan, “whether this increase in the gorilla range represents a larger population than previously estimated, a range expansion as a result of decreased hunting pressure, or simply an improved understanding of which areas are used by the gorillas, remain uncertain.” Courtesy of Cross River Gorilla Action Plan 2014-2019 by IUCN’s Primate Specialist Group. Click to enlarge.

A recent study led by Imong, found that while most of the sub-populations seemed structurally well-connected by patches of forests, functionally they were not. In other words, it is becoming increasingly difficult for the gorillas to disperse between sub populations due to increasing human disturbance. And dispersal is vital if the subspecies is to survive.

“The three enclaved villages within Okwangwo have continued to expand beyond their boundaries,” said Imong. “With a fast growing human population, these villages are putting increasing pressure on the forest and wildlife of the park through expanding farmlands, commercial hunting of animals, and the collection of non-timber forest products.”

As these villages continue to clear up forests in the region, they also threaten to split CRNP into two halves, thus isolating the gorillas occurring in the northern part of Okwangwo (called the Boshi Extension) from the rest of the gorillas in Okwangwo-Takamanda complex.

Additionally, the park is dotted with numerous illegal “bush sheds” used to collect non-timber forest products, which often double as poaching camps. Given the high demand for bushmeat at the border region, hunting is rife. In the past, hunting in the area has led to the extinction of at least two primate species – the crowned guenon (Cercopithecus pogonias) and the grey-cheeked mangabey (Lophocebus albigena). 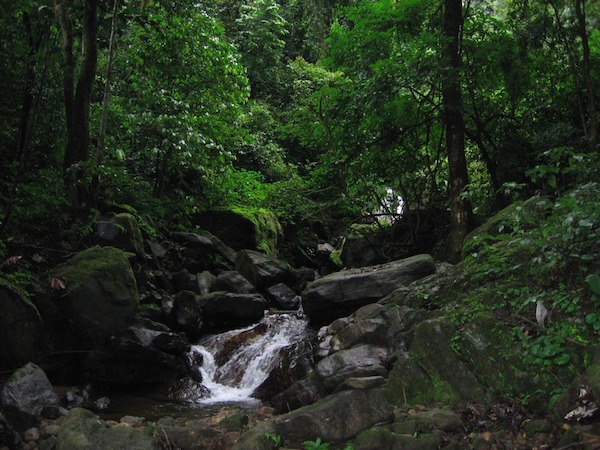 The Cross River gorilla, listed as Critically Endangered by the IUCN Red List, appears to also be affected by hunting pressures. According to Imong, while there have been no confirmed cases gorilla hunting in Okwangwo, at least seven gorillas have been killed in the larger landscape – three in adjoining Afi Mountain Wildlife Sanctuary in Nigeria, and four in Cameroon.

With forests being burned down for pastures and farmlands, along with the development of roads, the gorillas now must live closer to humans and domesticated animals than ever before. Consequently, there is an added risk of diseases spreading through the gorilla populations, which could potentially decimate the last remaining individuals.

The gorillas’ existence along the border Nigeria and Cameroon also makes life challenging. Like Nigeria, Cameroon too has seen rapid deforestation in the recent past. According to Global Forest Watch figures, the tree cover loss in Cameroon totaled 481,580 hectares between 2001 and 2013. Logging and mining activities at the border of the parks, such as between Oban and Korup, also threaten wildlife habitat. 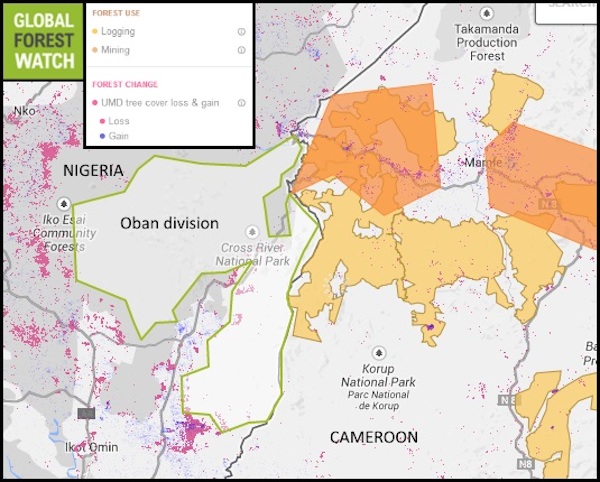 While the gorilla is formally protected under law, at least in paper, its implementation has not been very stringent. This has conservationists extremely concerned.

“Law enforcement in the Okwangwo-Takamanda transboundary area is challenging as poachers and other offenders often evade arrest by slipping across the international border,” said Imong.

However, more protections for Cross River gorillas may be on the way. The IUCN’s primate specialist group has now formulated an action plan to save the subspecies. According to the action plan, sightings seem to increasingly occur outside existing protected areas. But “whether this increase in the gorilla range represents a larger population than previously estimated, a range expansion as a result of decreased hunting pressure, or simply an improved understanding of which areas are used by the gorillas, remain uncertain,” the authors write in the report.

Given the lack of complete understanding of the gorilla’s range and behavior, the action plan lays emphasis on scientific research to better understand the status of Cross River gorillas in Nigeria and Cameroon. It also recommends promoting community participation. Since a large part of the gorilla habitat falls within community lands that do not have legal protected status, working with local communities is essential. In addition, it is imperative to improve law enforcement at the borders and empower the rangers who patrol the forests. 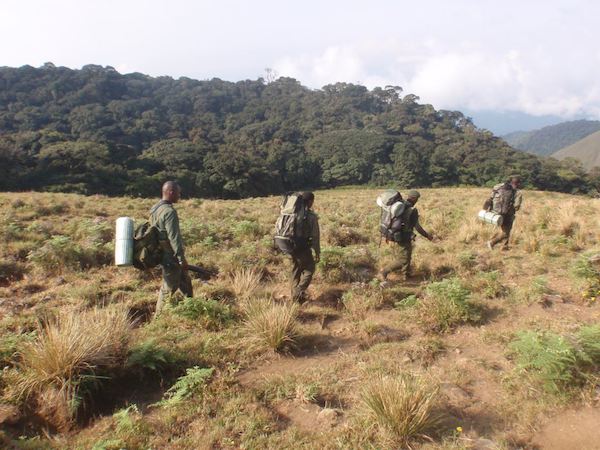 A ranger patrol facilitated by WCS in Okwangwo. Photo by WCS Nigeria.

But to succeed in the long run, cooperation between Nigeria and Cameroon is vital.

“Transboundary cooperation between Okwangwo Division of CRNP in Nigeria and Takamanda National Park in Cameroon has been strongly promoted in recent years with regular joint anti-poaching patrols, annual transboundary workshops, exchange visits and information sharing,” said Imong. “A framework cooperation agreement has also been drafted between the governments of Cameroon and Nigeria to facilitate the implementation of transboundary conservation and research activities.”

Will cooperation between the two countries and increased IUCN attention be enough to save the last of the iconic Cross River gorillas? Only time will tell.

(07/01/2014) Subjecting 30 hairs purportedly from bigfoot, the yeti, and other mystery apes has revealed a menagerie of sources, but none of them giant primates (unless you count humans). Using DNA testing, the scientists undertook the most rigorous and wide-ranging examination yet of evidence of these cryptic—perhaps mythical—apes, according to a new study in the Proceedings of Royal Society B.