On a whim: Equatorial Guinea building new capital city in the middle of the rainforest

New city to house up to 200,000 people, thousands of hectares of forest being cleared

Like eerie ghosts of the trees and animals driven away, thick clouds of smoke and dust rise over Wele-Nzas Province in Equatorial Guinea.

More than 8,000 hectares of rainforest are under threat as the nation builds a new $600 million capital city from scratch. Called Oyala, and also known as Djibloho, the city is expected to be completed by 2020 and house up to 200,000 people — about an eighth of the entire population of the entire country.

Forests are being cleared at a rapid clip to make room for gleaming new office towers, apartment buildings, houses and highways in Africa’s third largest energy producer, where oil and gas revenues have fed the frenzy of construction.

The motivation behind the construction of the new capital seems to come solely from the wish of the Equatorial Guinea’s current president, Teodoro Obiang Nguema, to reside in a more secluded, secure area, far away from the coast and the risk of attack from those opposed to his administration. 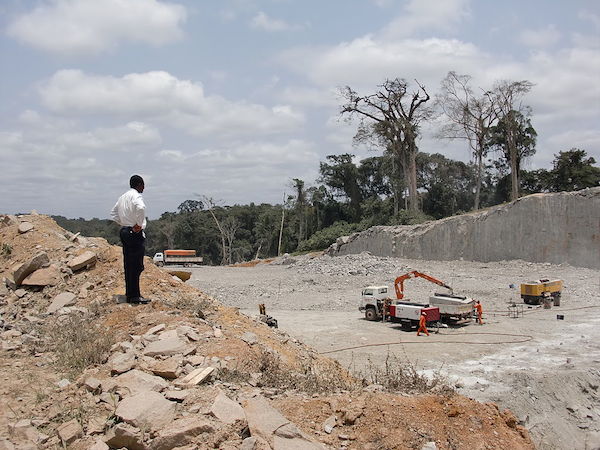 A road is carved out of the forest in the soon-to-be new capital city of Oyala. Photo by Mehlauge.

Oyala will also include a new presidential palace, a parliament building, an opera house, a cathedral and a five-star hotel with 400 rooms. Photographs show long cuts in the dense rainforest, suggesting wide avenues, along with twin 150-meter (500-foot) suspension bridges crossing the Wele River. A new six-lane highway, dubbed the “Avenue of Justice,” and a golf course have already been carved out of the virgin forest.

The city will be situated in the remote eastern portion of the country, approximately 125 kilometers (75 miles) from the coast. Every nail, brick and tile is imported. The funds needed to build the city are coming from the sale of 1.7 billion barrels of oil reserves.

Since the administration of President Obiang announced plans to build Oyala as the new capital city, the construction has been at the center of a political tug-of-war between environmentalists, political opposition and some powerful business interests.

According to Dr. Placido Assomo, an environmental scientist wih Harvard Universiy who is based in the current capital city of Malabo, the construction of the lavish city is an ecological calamity.

“The rainforest, which seemed infinite only a few years ago, is now facing the prospect of extinction,” Assomo said. “Grim scientific prognoses have come to pass in the form of disasters like the unthinkable droughts and floods in some parts of the country.”

Assomo said the construction of Oyala is one of the most grandiose and expensive construction projects in all of Africa. He added that what is happening in Wele-Nzas is the biggest backslide the country could ever imagine in regard to environmental policy.

“For me, this is like something out of the science-fiction classic ‘Dune,’” Assomo said. “We were expecting to be given a comprehensive program that will at least stop further deterioration to the environment by the government, but nothing came. This is a test case, a litmus environmental test for the government.”

The fight over the construction of the city has stoked the age-old struggle over development versus conservation in Africa. Many African countries face increasing international pressure to protect their forests from deforestation as they provide vital habitat for innumerable species, and their sheer scale affects global climatic conditions.

However, while the forests of Wele-Nzas Province have high local and global value, many people in this region are impoverished and their livelihoods are based on agricultural and forest resources. The destruction of forest may have profound impacts on the Equatoguineans’ lives.

“In this country, forests cover roughly 98 percent of our total national land area, providing services and sustenance to hundreds of thousands of Equatoguineans,” Assomo said.

According to Assomo, keeping these forests intact and undeveloped not only prevents dangerous carbon dioxide emissions, but it also protects the homes and livelihoods of tens of thousands of indigenous people.

“The forest is our supermarket, where we find everything, wood for building our houses, thatch for our roofs, sticks to make arrows, fruit and animals for our food,” said a Bubi traditional leader who lives just a few kilometers north of Oyala. “And it’s all getting farther and farther away because the construction is killing the forest near our village.”

According to the United Nations’ Food and Agriculture Organization (FAO), approximately 1.6 million hectares of Equatorial Guinea is forested. The country currently has 203 million metric tons of carbon stocks in living forest biomass. The forestry sector contributed $87.3 million to the economy in 2006, representing approximately 0.9 percent of the GDP.

According to data from Global Forest Watch, Equatorial Guinea lost 1,200 hectares of forest in 2006. Since then, the rate of deforestation has been increasing, reaching a high of 7,400 hectares in 2011. While this may seem small compared to some other countries with annual forest cover losses in the millions of hectares, this reduction still had significant impacts. According to the FAO data, 20.6 percent of Equatorial Guinea’s greenhouse gas (GHG) emissions in 2011 came from land-use change and forestry activities. 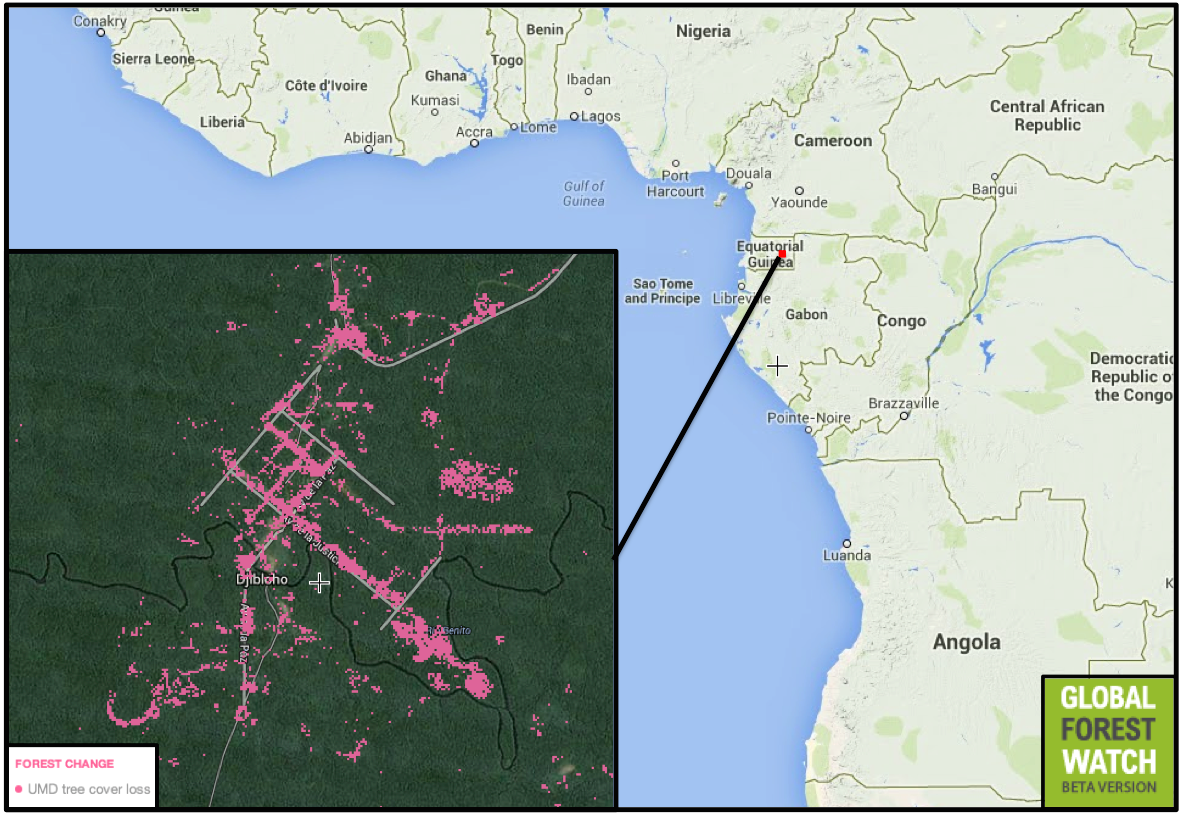 Oyala is located in the far eastern portion of the Equatorial Guinea. Since construction began, nearly 1,000 hectares of forest has been cleared for its construction. Many more thousands are expected to be felled — including as-yet intact forest — to make room for the city proper, as well as for construction of residences in the outlying areas. Map courtesy of Global Forest Watch. Click to enlarge.

The country is located in a region of high biodiversity, and is home to 194 species of mammals, 418 birds, 91 reptiles, and 3,250 plants. Many of these are endemic, meaning they exist in no other country. Of the 194 mammal species, 12 are listed as Endangered by the IUCN, as are four species of birds, two species of reptiles, and one species of amphibian. Six species of plants are threatened with extinction.

These at-risk species include the critically endangered western gorilla (Gorilla gorilla), which has declined 45 percent throughout its range due in part to habitat loss.

According to Assomo, vital forest habitat surrounding the new capital is expected to be degraded as more and more people move into the area. The country’s oil operations are also causing forest degradation from contamination, oil spills and wastewater discharge. 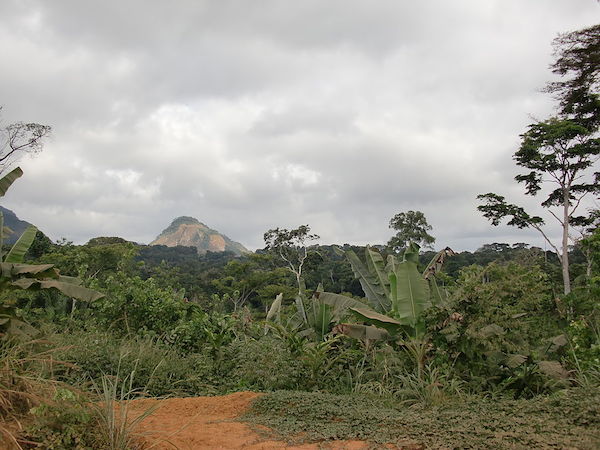 The area surrounding Oyala consists of unbroken, lush forest, some of it untouched by development. At least 8,000 hectares (likely much more) is expected to be cleared to make room for the new capital. Photo by Mehlauge.

The Minister of Fishing and Environment, Crescencio Tamarite Castaño, said his government must reconcile income generation with sustainability.

“The rainforest is an enormous resource for us, and we are making every effort to preserve it and solve the problems as best as we are able,” Castaño said.

According to Castaño, environmental impact assessments were undertaken when construction of Oyala was being planned, and the government has taken into consideration ways to mitigate its impact.

“Forests are part of our economic development and also we are a member of the UN and we take environmental issues seriously,” he added.

Castaño said Oyala will be a purpose-built city, designed to respond to the needs of future inhabitants. But critics say its real function is to serve the needs of President Obiang, who is currently the longest serving non-royal head of state.

Defending the construction of the new capital, Obiang described in an interview with the BBC how rebels had plotted a seaborne assault on his palace in the current capital.

“We need a secure place for my government and for future governments,” he said. “ That’s why we have created Oyala, to guarantee the government of Equatorial Guinea.”

While completion is still officially slated for 2020, that date may be extended due to setbacks. According to the BBC, such setback occurred when Obiang visited a recently constructed university building in Oyala and did not approve of the view from its windows. The building has since been moved.

Editor’s note: a previous version erroneously stated Equatorial Guinea has no mainland protected areas. This was due to an error in mapping software, and has been corrected. Some have also disputed the BBC’s account of the university building being moved.

(05/02/2013) Equatorial Guinea is not a country that stands very large in the American consciousness. In fact most Americans think you mean Papua New Guinea when you mention it or are simply baffled. When I left for Bioko Island in Equatorial Guinea, I also knew almost nothing about the island, the nation, or the Bioko drills (Mandrillus leucophaeus poensis). The subspecies of drill is unique to Bioko Island and encountering them was an equally unique experience. I initially went to Bioko as a turtle research assistant but ended up falling in love with the entire ecosystem, especially the Bioko drills as I tagged along with drill researchers.

(08/20/2012) A two-year-old western lowland gorilla female was recently confiscated from a beach restaurant, popular with expats, in Equatorial Guinea.