Greenhouse gas emissions from human activity have caused global air and sea surface temperatures to rise approximately 0.8 Celsius (1.4 degrees Fahrenheit) since the beginning of the 20th century, contributing to a plethora of problems worldwide from rising sea levels to desertification. A new study published in Conversation Letters finds that global temperatures may start to increase even faster if more is not done to protect Earth’s boreal forests.

Boreal forests, or taiga, are forests of cold-adapted trees that encircle the globe from latitudes of approximately 50 to 70 degrees north. The world’s largest biome, boreal forests cover much of the landmass of the Northern Hemisphere, and comprise approximately 25 percent of the planet’s total forest area. They also contain more than 35 percent of all terrestrially bound carbon, stymying its release into the atmosphere.

According to Jon Moen, an author of the report, a failure of global climate change policies to properly support boreal forests could prompt forests to emit more carbon than they consume, potentially contributing significantly to increased global temperatures.

“The scary part is if the thawing permafrost, increased fires, drought and insect attacks release the carbon that is stored in the boreal zone, we might see temperatures increase even more,” Moen said.

Boreal forests are found in some of the world’s wealthiest nations, including the U.S., Canada, Russia, Finland, Sweden and Norway. But Moen says many government policies, as well as the United Nations Framework Convention on Climate Change and the Kyoto Protocol, fail to properly incentivize sustainable forest management practices.

“The absence of boreal forests from global policy agendas on sustainable development and climate change mitigation represents a massive missed opportunity for environmental protection,” he said.

“We believe that the carbon stores in boreal forests are underestimated and that the risks following the release of carbon from soils and peat are not well understood, so there is need for more knowledge and attention on these issues.” 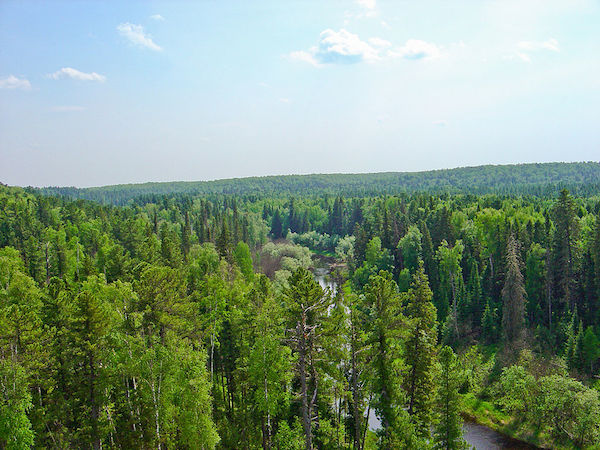 Boreal forest, or taiga, in central Russia. Often dominated by conifers, deciduous trees such as birch and aspen can also be found in these forests.

According to Moen, the European Union has also failed to integrate forests into its climate change policies, but that steps have been taken to better support and manage Europe’s vast forests.

“In Sweden and Finland there are increasing discussions on more sustainable forestry practices, but progress is slow,” he said. “The E.U. is discussing a common forest policy, but timber-rich countries generally do not see that as a positive step as they do not want outside interference with this economically important sector.

“Globally, it is a bigger problem that the Kyoto Protocol is fairly toothless and that some countries, such as the U.S., are not even signatories.”

When a forest is harvested or destroyed by a windstorm, the carbon it had been storing is lost, posing a problem for governments when accounting for carbon in the atmosphere. Moen and his team suggest one of contributing factor to the failure to properly recognize the importance of boreal forests is that governments don’t have a proper understanding of the roles forests play in the global carbon cycle, the process by which carbon is exchanged between air, land and water.

Researchers are calling for a broader and more multifaceted approach to addressing the issue rather than the traditional focus on establishing protected areas and restricting development.

“About half of the boreal forest has been managed or exploited, and the rest is more or less virgin,” Moen said. “We suggest that a first approach could be to protect the virgin forests that are left, and increase the focus on sustainable forestry with a focus on multiple ecosystem services in the rest.

“That means, for instance, to take carbon emissions and the protection of biodiversity into account together with the timber and biomass produced.”

While the Amazon is considered by scientists to be the “first lung” of the planet, the boreal ecosystem is seen as the second. It is a vital component of the world’s carbon cycle, and an important reservoir of temperate biodiversity. Moen and his team believe immediate action must be taken to protect it and, consequently, the world as a whole.

“We need to think about ways of not just protecting forests,” Moen said, “but to actually manage them to reduce this risk of a climate tipping point.”