In 2004 and 2012, scientists recorded rare encounters between two very different primates: southern Bornean orangutans (Pongo pygmaeus wurmbii) and Philippine slow loris (Nycticebus menagensis). But in neither case did the Bornean orangutan appear to attempt to kill the slow loris for consumption, which Sumatran orangutans are known to do, albeit very rarely.

“It is important to document these kinds of observations, as it demonstrates culture behavioral differences between populations of orangutans, and how they interact with other animals they share the forest with,” Helen Morrogh-Bernard with the University of Exeter told mongabay.com. Morrogh-Bernard, who is also the project director at the Orangutan Tropical Peatland Project, co-authored a paper on the observations for the journal Primates. 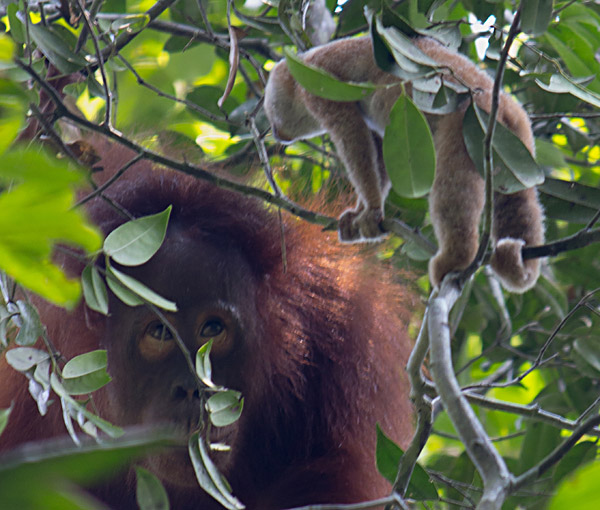 A young orangutan runs into a Philippine slow loris. Photo by: Helen Morrogh-Bernard.

After ten minutes, the orangutan lost interest and the slow loris escaped. Both of these observations were made in Kalimantan, or Indonesian Borneo, in the Sabangau Forest, which is home to the largest unbroken population of Bornean orangutans.

The scientists write that the behavior shown by the orangutans in both these accounts did not look like an attempt to catch and eat the slow loris, but were “more similar to play and intrigue.”

“The lorises…appeared to the orangutans as novel and interesting, more of a play object than a form of food to be eaten,” add the scientists. The observations possibly show a distinct difference between Bornean and Sumatran orangutan behavior.

“Observations of nocturnal and diurnal primates coming together are relatively rare. Sadly it seems the ones that make the news is one the smaller primate becomes the dinner for the larger one,” Anna Nekaris, with Oxford Brookes University and head of the slow loris-NGO, Little Fireface Project, told mongabay.com.

“In many cases, too, however, these primates are just curious and seem to like seeing one another! For example, I have seen macaques groom slender lorises, who looked a little irritated…but no malice was intended,” Nekaris added. “We still have so much to learn and that just like humans, other primates can be curious, playful and peaceful with their primate neighbors.”

But playing with a slow loris, or eating one for that matter, may be hazardous. Slow lorises produce a venomous substance from a gland on their upper arm, which they mix with their saliva making their bite potentially toxic. Yet in both observations, scientists did not notice any wariness on the parts of the orangutans toward the potentially dangerous slow loris.

“The fact that the mother did not stop her daughter from playing with a poisonous animal is interesting, suggesting that maybe Sabangau orangutans do not come in to contact with many lorises and thus do not know the dangers,” the researchers write.

In general, both species of orangutans are not active carnivorous hunters, unlike say some groups of chimpanzees or humans. The Asian great apes mostly eat fruit, but also bark, honey, insects, and eggs. While researchers have recorded Sumatran orangutans (Pongo abelii) killing and eating Sunda slow loris (Nycticebus coucang), such reports are incredibly rare and thought to be “opportunistic,” according to the researchers. In fact, this behavior has only been seen nine times by six different orangutans in Sumatra.

“The infrequency of encounters between lorises and orangutans despite thousands of hours of focal-animal follows in Sumatra shows that this is not a common occurrence,” the researchers write. “The reason for this may be explained by the nocturnality of the slow loris or the ability of a slow loris to fend off potential orang-utan predators with venom defenses.”

The Bornean orangutan is listed as Endangered, while the Sumatran is considered Critically Endangered by the IUCN Red List. Both species are hugely imperiled by deforestation, largely for palm oil or paper plantations. Both Malaysia and Indonesia have some of the world’s highest rates of forest loss over the last decade. Meanwhile the Philippine slow loris and the Sunda slow loris are considered Vulnerable. While these species are also imperiled by forest loss, the main threats is the illegal pet trade. Poachers steal slow lorises from the wild, yank out their teeth, and then sell them to exotic pet keepers. Experts believe many slow lorises die from poor treatment and improper diet before they are even sold, let alone short lifespans as pets.

(05/01/2014) Once almost extinct in parts of Europe in the late 17th century, the roe deer (Capreolus capreolus) eventually bounced back, and how: today, it is one of the most widespread deer in Europe. But will its luck dry out in the future? A new study published in PLoSBiology suggests that while roe deer populations are still increasing, it may not be adapting to climate change.

(03/27/2014) Among the huge diversity of insects there are some bewilderingly complex life cycles, but few can compete with the trigonalid wasps for the seemingly haphazard way they ensure their genes are passed to the next generation. In most cases, a female parasitoid wasp deposits her eggs on or in the host, but this is far too pedestrian and safe for the trigonalids. These mavericks of the wasp world, which are also parasitoids, like to make things more difficult for themselves.

(03/14/2014) Kate Mansfield, at her lab in the University of Central Florida, is holding a baby loggerhead turtle, smaller than her palm, painting manicure acrylic on its shell. When the base coat dries out, she glues on top a neoprene patch from an old wetsuit with hair extensions adhesive. Finally, she attaches a satellite tracker on top, the size of a two “party cheese” cubes, with flexible aquarium silicone, powered by a tiny solar battery. Now the little turtle is ready to be released back into the ocean.